Celebrities have always been stylish. Just look at Clark Gable, James Dean, or even Bruce Lee; they were all well dressed men with a command over how they wanted to present themselves.  It made sense, as these men were movie stars. But in the modern age, we’ve learned that dressing well doesn’t always men just wearing suits and it certainly doesn’t mean you have to be a leading Hollywood actor.


And that brings us to Conor McGregor, who is just as stylish as those men but does it in a notoriously masculine way.


I don’t think that The Notorious MMA needs an introduction, because just one look at him (or his social media) will tell you what you need to know.  Perhaps most obviously, you’ll see that this Irishman knows how to fight and win in MMA. You’ll see that he loves his Proper Irish Whiskey. You’ll see that McGregor loves his family. But what you may notice is that he’s also a very stylish man! Whether he’s just hanging out with his family or he’s promoting his whiskey, he’s always in something sharp.


Gone are the days where jocks and athletes paid no attention to their attire.  With the spread of menswear (especially with it being more accessible), more and more men are dressing up and taking pride in their outfits, so an icon like The Notorious comes as no surprise. So today, we’re going to look at a few of his recent IG posts to see what we can gleam off him.  We may not be able to win in the ring like he does, but we can settle for winning the fit battles that may or may not simply be in our head! 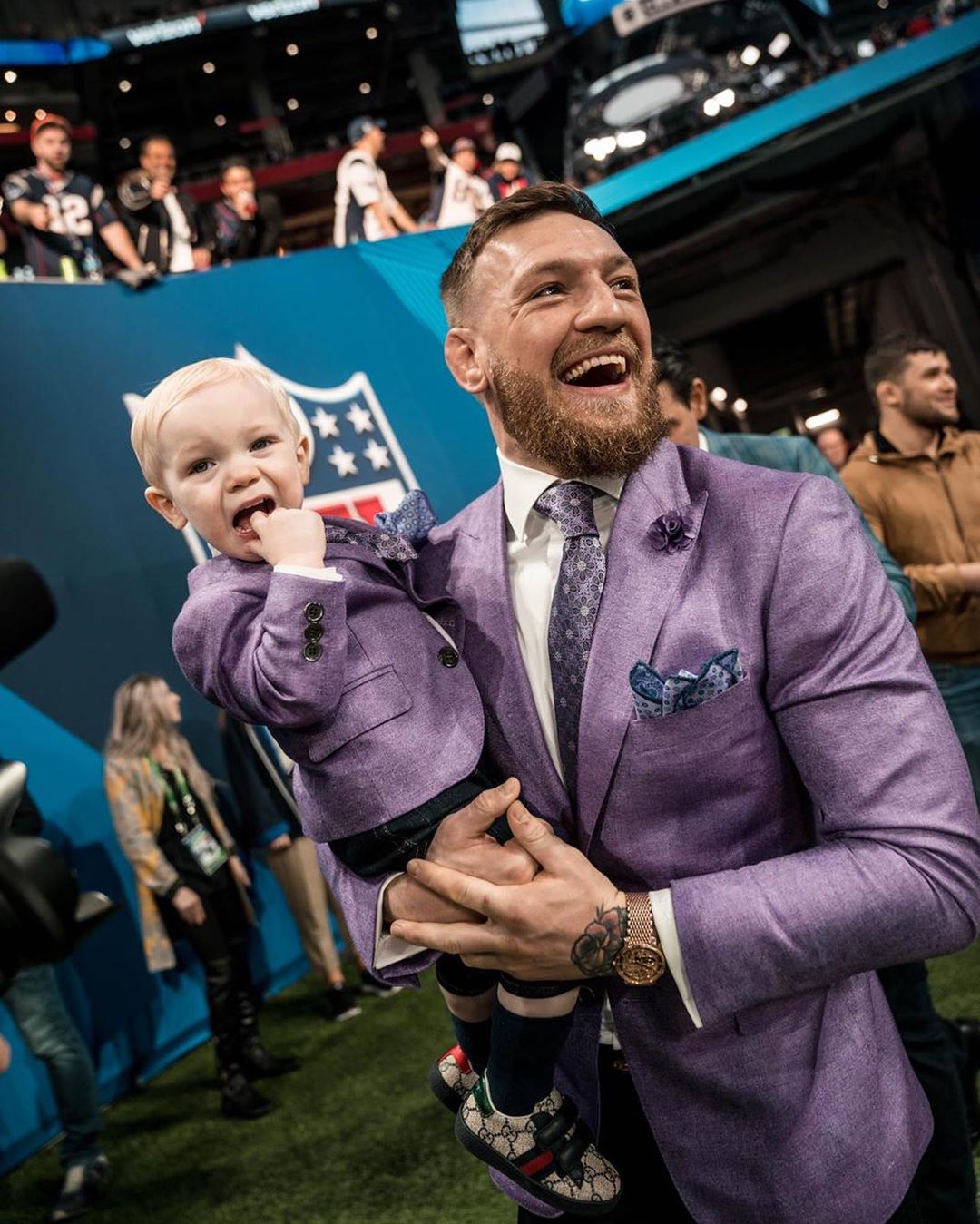 It’s cool that color in menswear is something to be embraced rather than shunned.  Sure, some guys may think it’s weird to wear suits that aren’t the traditional navy or grey, but McGregor gives no fucks.  A lavender jacket fits right in with his bold personality; it doesn’t look out of place at all! It may be a bit light, but he anchors it in well with dark denims and plays with the color with a tie and pocket square in a similar shade.


When you’ve gone beyond the basics of navy jackets and grey pants, color is definitely the next step and should be embraced in your menswear journey.  If the Notorious can do it, so can you. 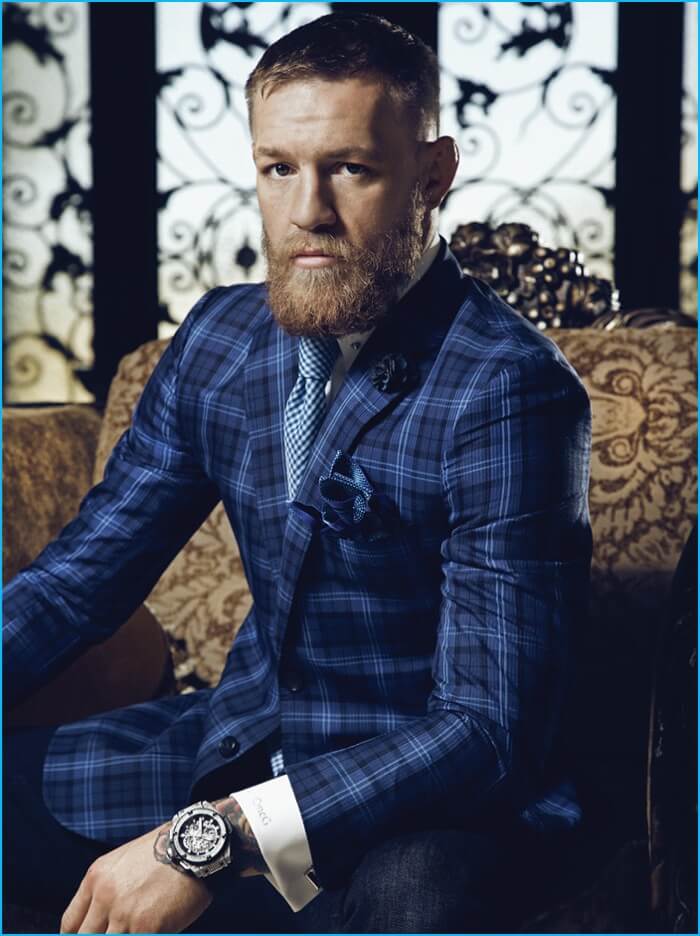 We love singing the praises about plaid here at Craftsman Clothing, especially with our pieces on standing out or embracing vintage style.  McGregor clearly shares that view, as he loves his plaid jackets and suits, which he wears whenever he’s not wearing fun solid colors. You don’t have to go crazy, since doing it wrong can go tacky, so just follow Conor’s example. Stick with shades of blue; it’ll come off like you’re simply wearing a navy blazer but with infinitely more personality.  That way you’ll look like a guy who takes pride in looking good rather than someone who simply dresses to be professional. We ain’t boring. 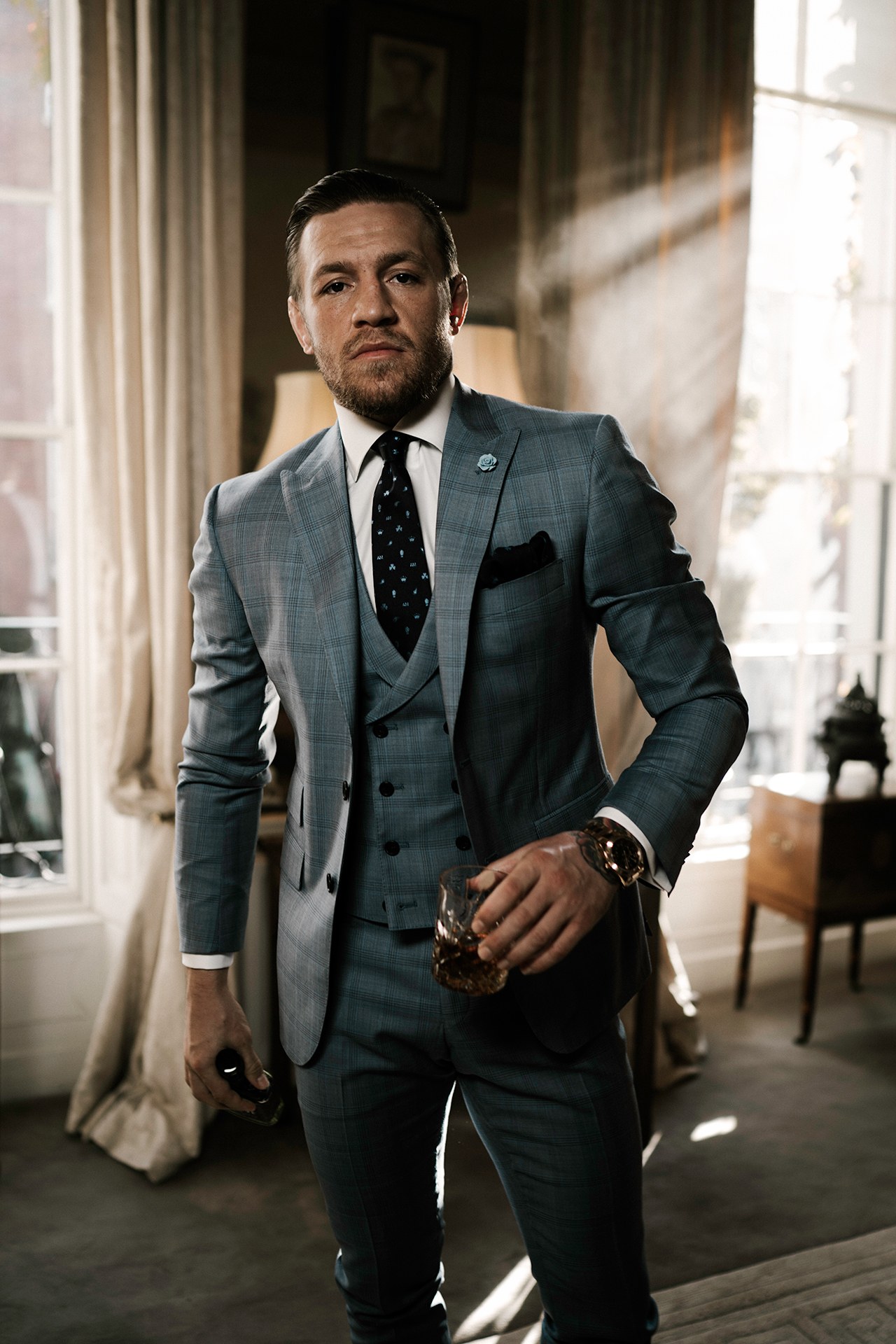 I have a theory that only the most badass motherfuckers wear peak lapels.  James Bond does it. Ralph does it. Our good friend Wei Koh does it. And as expected, Conor McGregor does it too!


There’s just something special about them. Firstly, they just stand out among the crowd. The wide, sharp peaks cut down all the competition, from the standard/corporate notch to the soft, elegant shawl. It really is one of the most masculine things you can get from something tailored and why we prefer it on almost all of our sportcoats.  It’s like evoking the ruggedness of a safari, but in a blazer!


It’s no wonder that McGregor opts for this choice across his tailoring, since he’s one of the most masculine badasses out there.  Your personality can speak for itself, but why not add to it with your clothing too? 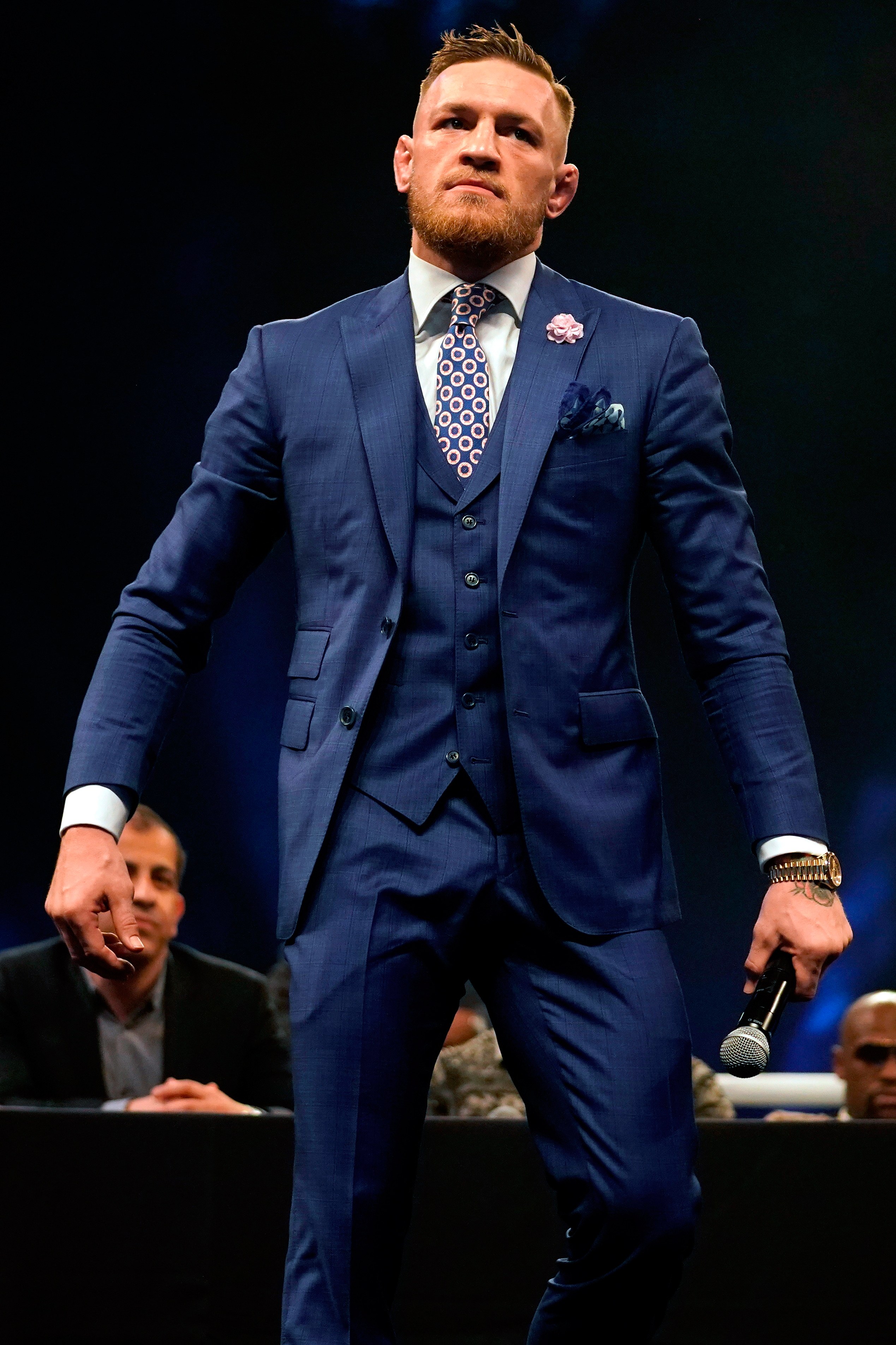 The 3PC suit is something that has been almost lost to time, mainly due to the fact that the entire world has been getting more casual.  While that may appear like bad news to some, it really just means that you have more choice in what you wear and when you do decide to dress up, you stand out.  Peak lapels are one way to change it up, but intentionally going with a 3PC is next level.


3PC suits are definitely more formal than the regular 2PC versions, and provide a bit of elegance and old school charm whenever you wear it.  McGregor does it well, straddling the line between a modern and vintage thanks to the cut and detailing of his 3PC suits. It provides a more monochromatic vibe to an outfit (since the jacket, waistcoat, and trousers are all one color), which provides a commanding, masculine presence. Again, if you want to exude those Notorious vibes, you gotta add that matching waistcoat to your suit. 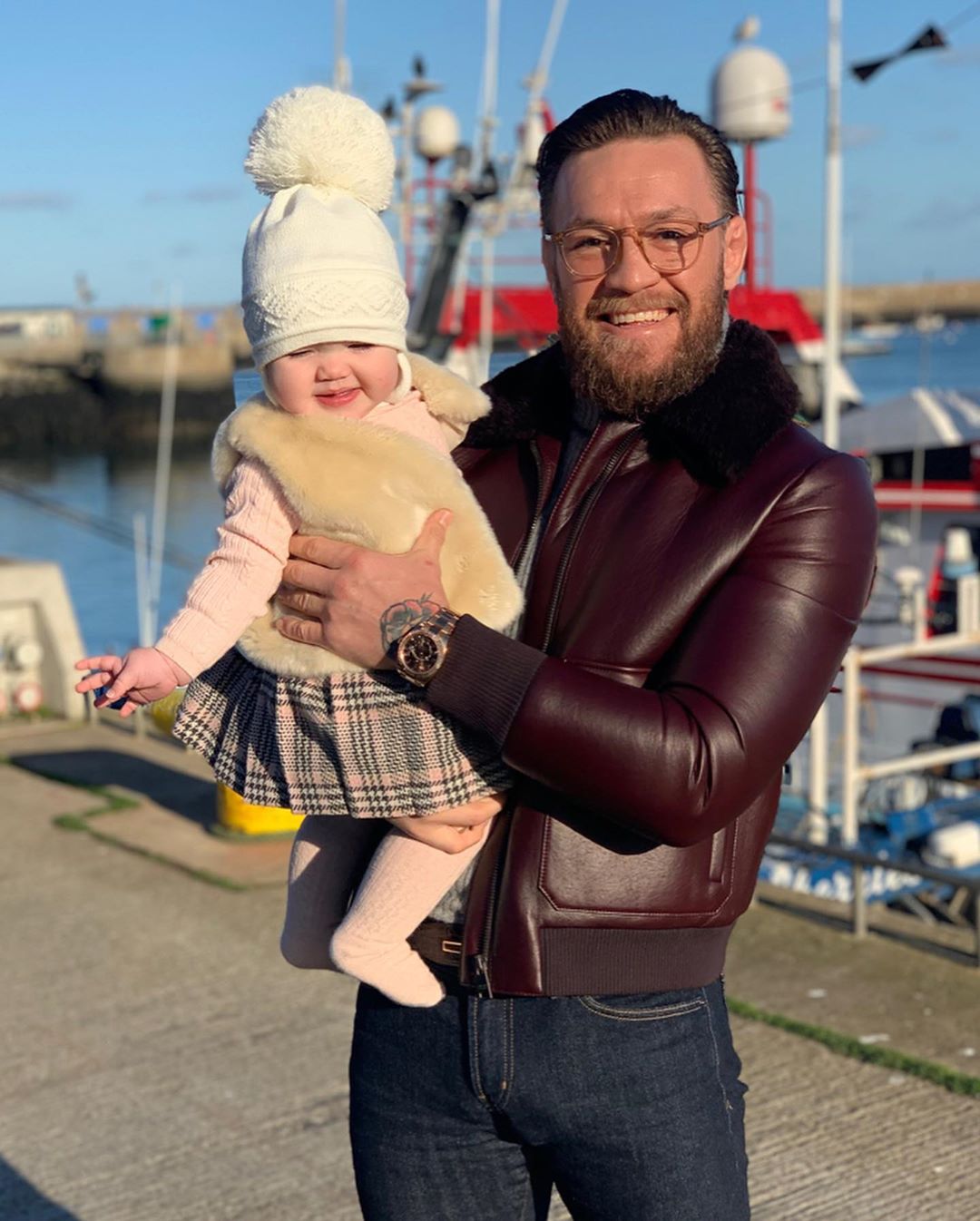 Leather jackets are simply one of the coolest things you can own and it’s even better when you get one that isn’t like the others.  It seems most of the ones out there are either black bikers or brown A-2s, which is why we created our business to give gentlemen around the world the freedom to customize their perfect jacket.  We always want to stand out.


We’d love if McGregor made a jacket with us, but he certainly has a similar mindset.  In this picture, he wears a G-1 but it isn’t like any of the ones you normally see in vintage stores or milsurp shops. It’s a deep burgundy and has a fur collar, which gives it a unique vibe that is equal parts rugged and refined.  The fit is even spot on for his extremely muscular physique!

Seriously, the unique leather jacket is one of the best flexes you can do. 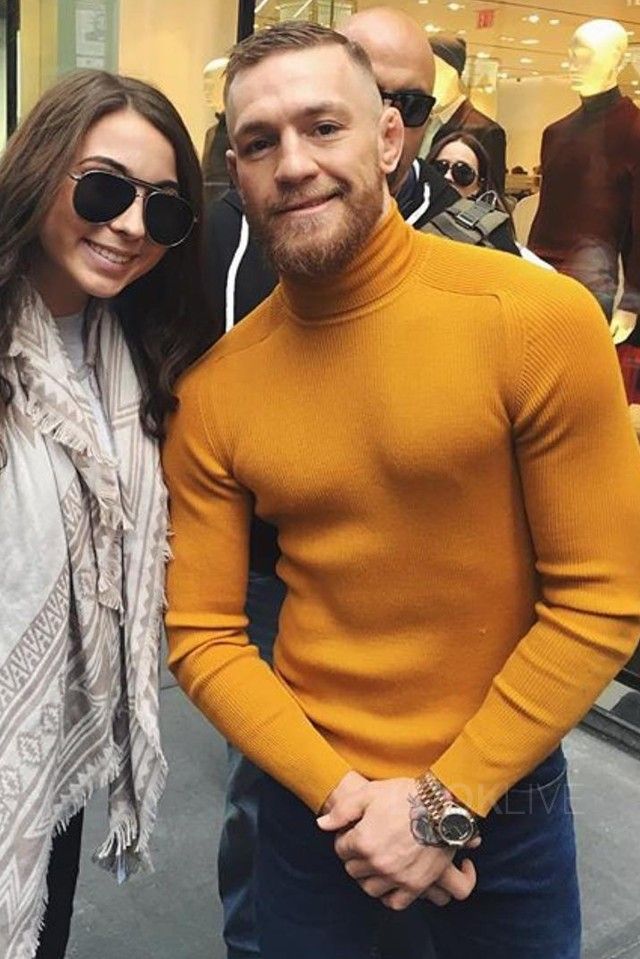 We love turtlenecks. They’re inherently minimal and sleek, since they provide an uninterrupted block through the body (and neck, duh) but the best are the ones that fit and hug your body in the right way. That’s why we love wearing them and why they make such a great compliment to any of our outerwear, from our safari jackets to our leather bombers.


McGregor provides a master class for us, showing that you can rock it even on it’s own with just a simple pair of trousers. And in his trademark way, he’s opted for some bold color, like this mustard yellow.  He’s a huge proponent of this style move, wearing turtlenecks both with or without jackets. It probably helps that it keeps him warm too! 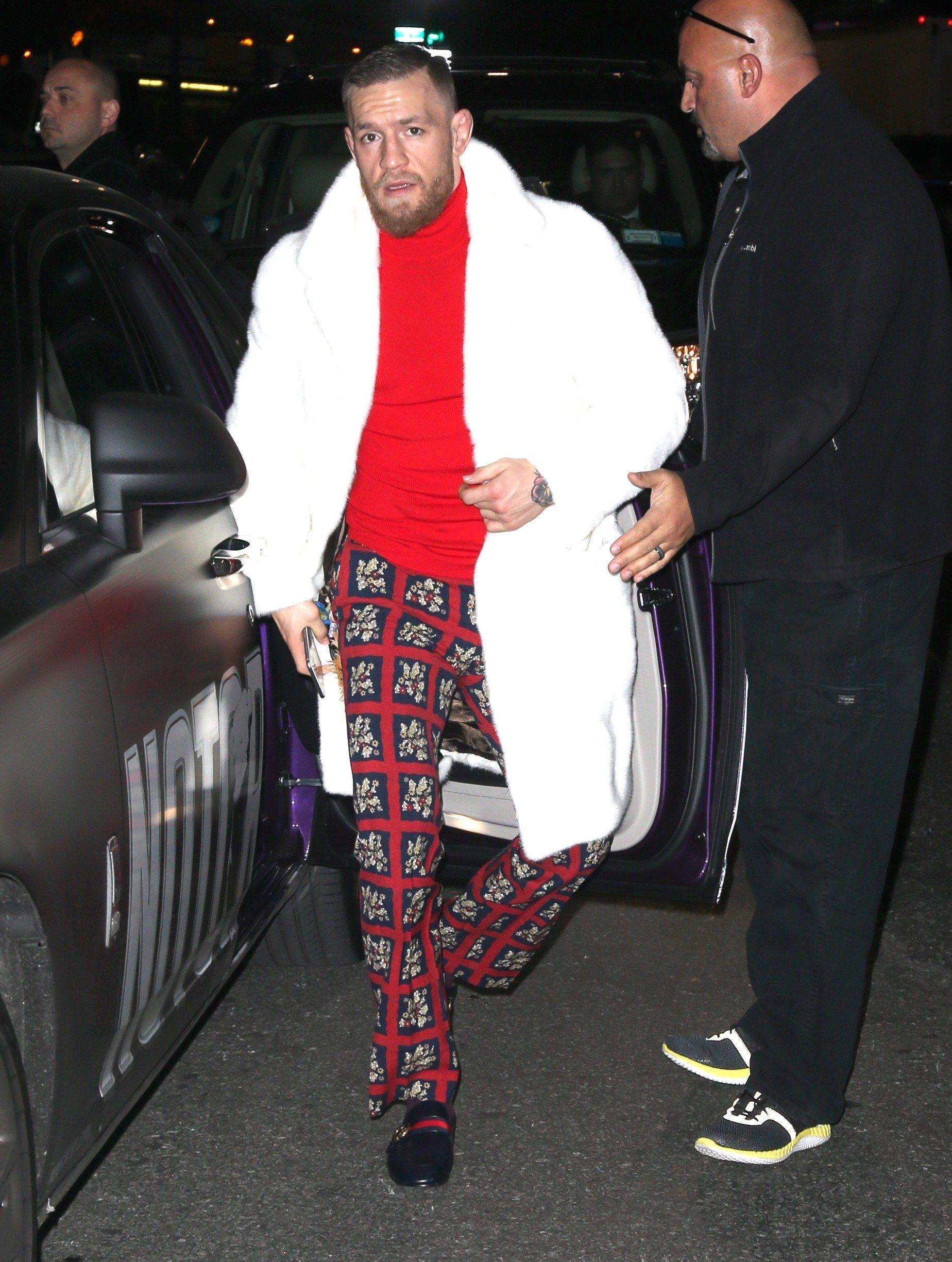 We’re gonna finish off with the fur coat, which is probably Conor McGregor’s most iconic piece of clothing he’s ever worn.  It’s so overtly extra, but it makes sense given his larger-than-life personality and exuberant confidence; you might even say that he was born to wear it. With it’s cream color, wide lapels, and knee length, this fur coat certainly is the boisterous version of the overcoats we talked about before.  But it’s just so good, especially when it’s used to anchor down a loud outfit, such as the one where he wears a vibrant red turtleneck with fun tile-motif trousers.


While we may not be ballsy enough to wear a cream fur coat, we can certainly evoke the same vibes with what we have here at Craftsman. And the closest thing we got is our newly launched MTO shearling bomber. It may not be a coat, but with its genuine shearling, wide collar, and light brown shade, it can be worn just as ostentatiously while still maintaining that strong, masculine look we love the Notorious for.  We may not have the tile-print pants, but our gurkhas are plenty loud enough for us.


So what are you waiting for? Put on a turtleneck, get those peak lapels, and join us for some Proper Irish Whiskey.  Don’t worry; we’re not going to beat you up. But our outfit might.