Today we take a look at one of the most classic pieces of menswear that has transcended it’s military roots and become a staple in classic menswear: The Army field jacket.  Now, it's finally available in something that isn't drab green. In fact, the Field Jacket is one of the stars of our latest collection and deserves its own detailed entry on our blog! 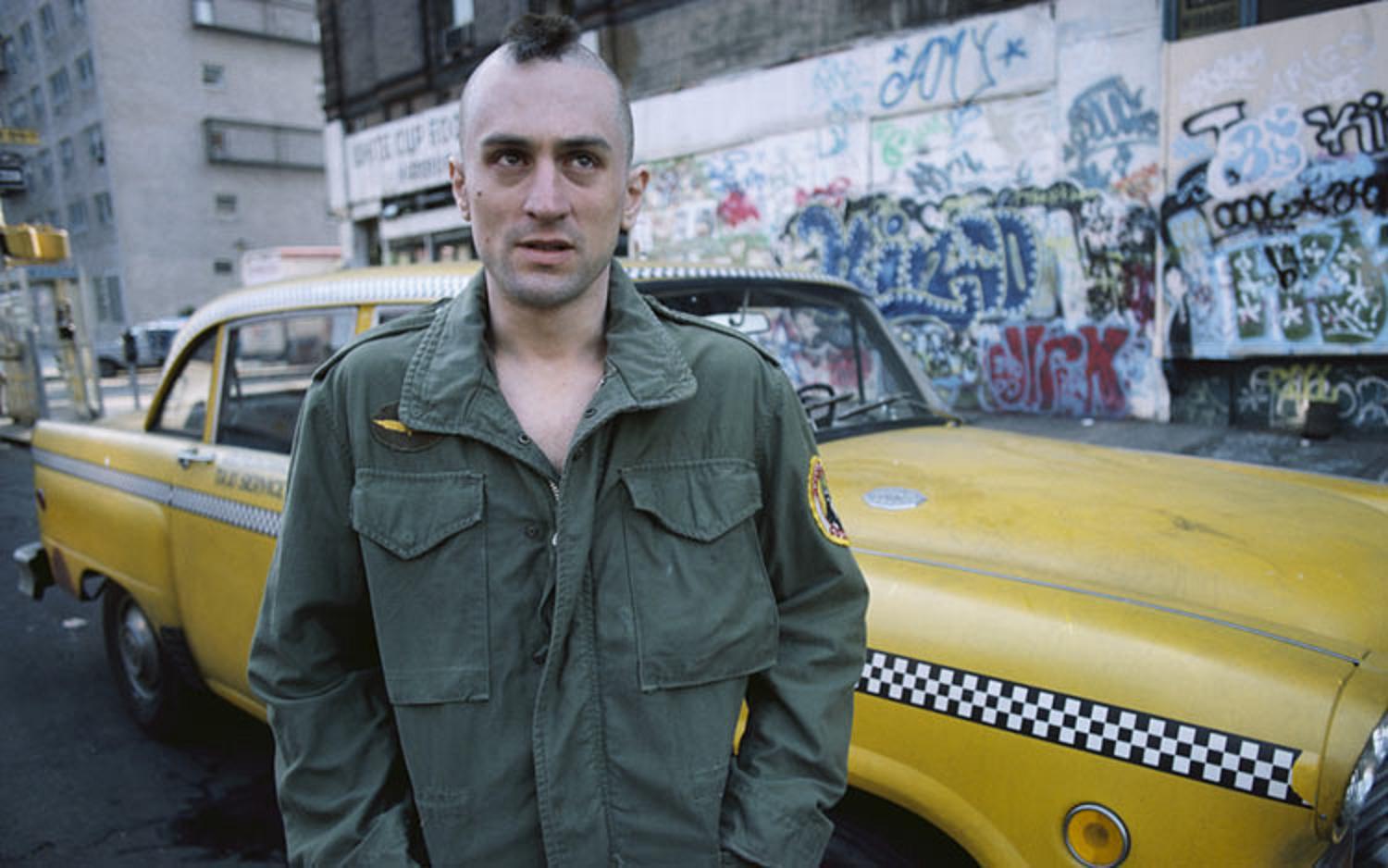 We at Craftsman Clothing have always loved military-inspired clothing.  The jackets are always utilitarian, rugged in design, and features plenty of pockets for use. We may not be using it in combat, but as young professionals in an ever changing landscape, it's useful and stylish for us!  Despite coming from a totally different background, they are a natural compliment to be worn over casual tailoring (like a button up and trousers) and even make a basic outfit more interesting when it’s done with jeans and tee shirts.


Our famous Hemingway and Rakish Safari Jackets are one such example. As we detailed in our previous blog post, the safari jacket was a part of the uniform used by the British military. The belted design was soon co-opted in civilian wear and made a huge splash in the 1960s-1970s as leisure wear.  Now, it’s made a full return, being one of the most popular casual sartorial pieces of outerwear in the world; we like to think we’ve had a small hand in that. 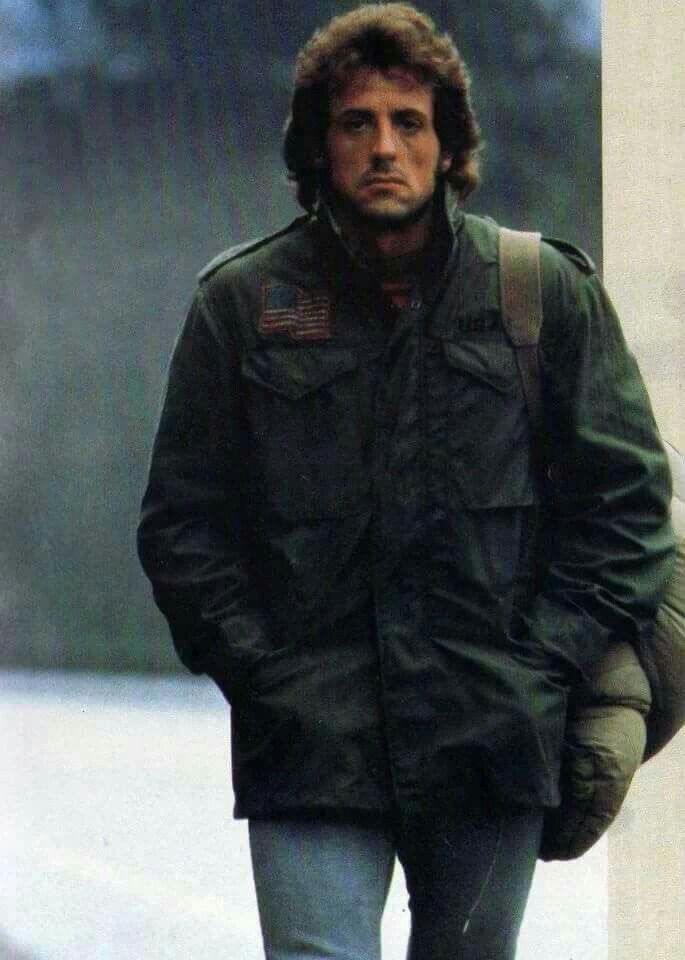 The army field jacket is the other side of this. Instead of being a louche piece of leisure, guys wear this to lean into the ruggedness. It’s a different vibe, but still casual and sharp! When you look at old ivy league pictures or even guys today who prefer Americana, they look great wearing this historic piece with everything. In film costuming, it’s a great way to give someone an old school, masculine feel, being worn by iconic characters like Rambo, Flint from Jaws, and our personal favorite, Travis Bickle in Taxi Driver.  And when a garment is that versatile, you know that it’s right up our alley. 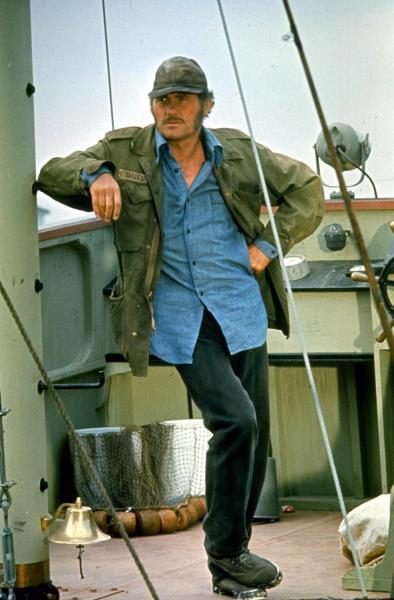 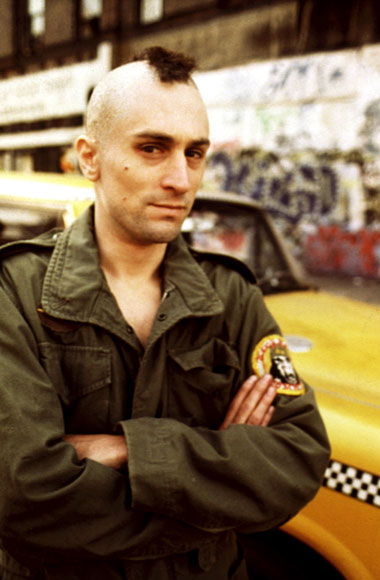 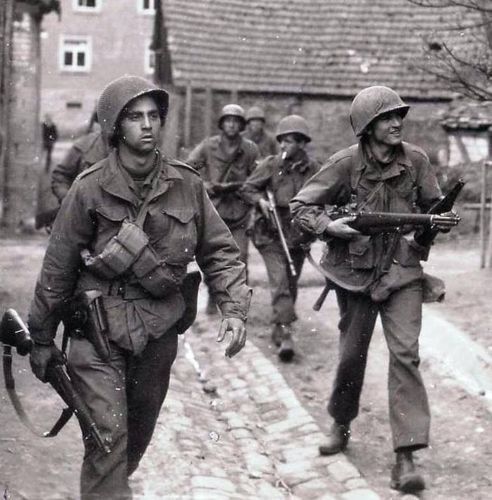 With American army field jackets, there are two basic designs that many pull from: the M-43 and M-65, worn during WWII and the Vietnam War respectively. Both are similar in design and have an iconic look featuring four big flapped bellow pockets, a hidden placket, and a drawstring waist (to add figure). The only difference is the style of collar, where the M-43 has one like a camp collar and the M-65 has a standing one, which actually held a hood! Unlike safari jackets, field jackets aren’t belted and have largely remained made in the same drab olive slightly heavy-weight cotton twill ever since.  While we love a classic garment like that, seeing something trapped in a singular design and cloth always gets our gears spinning. 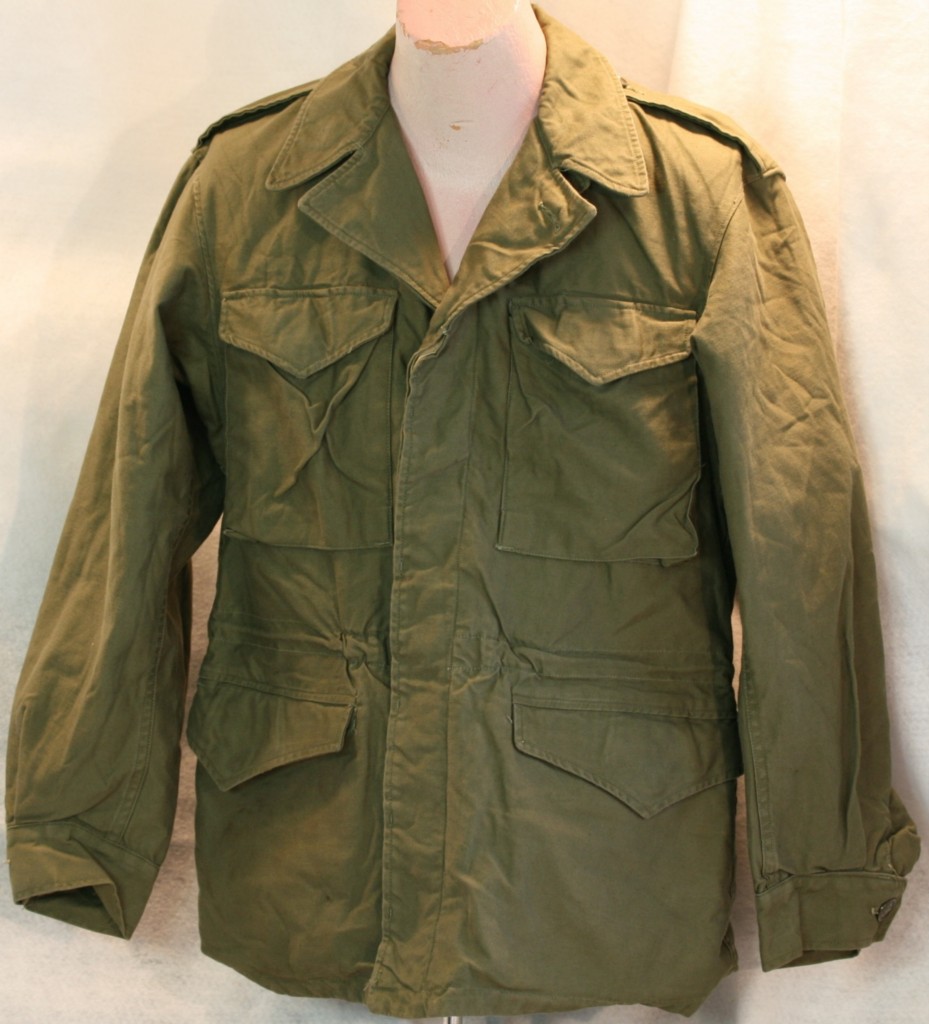 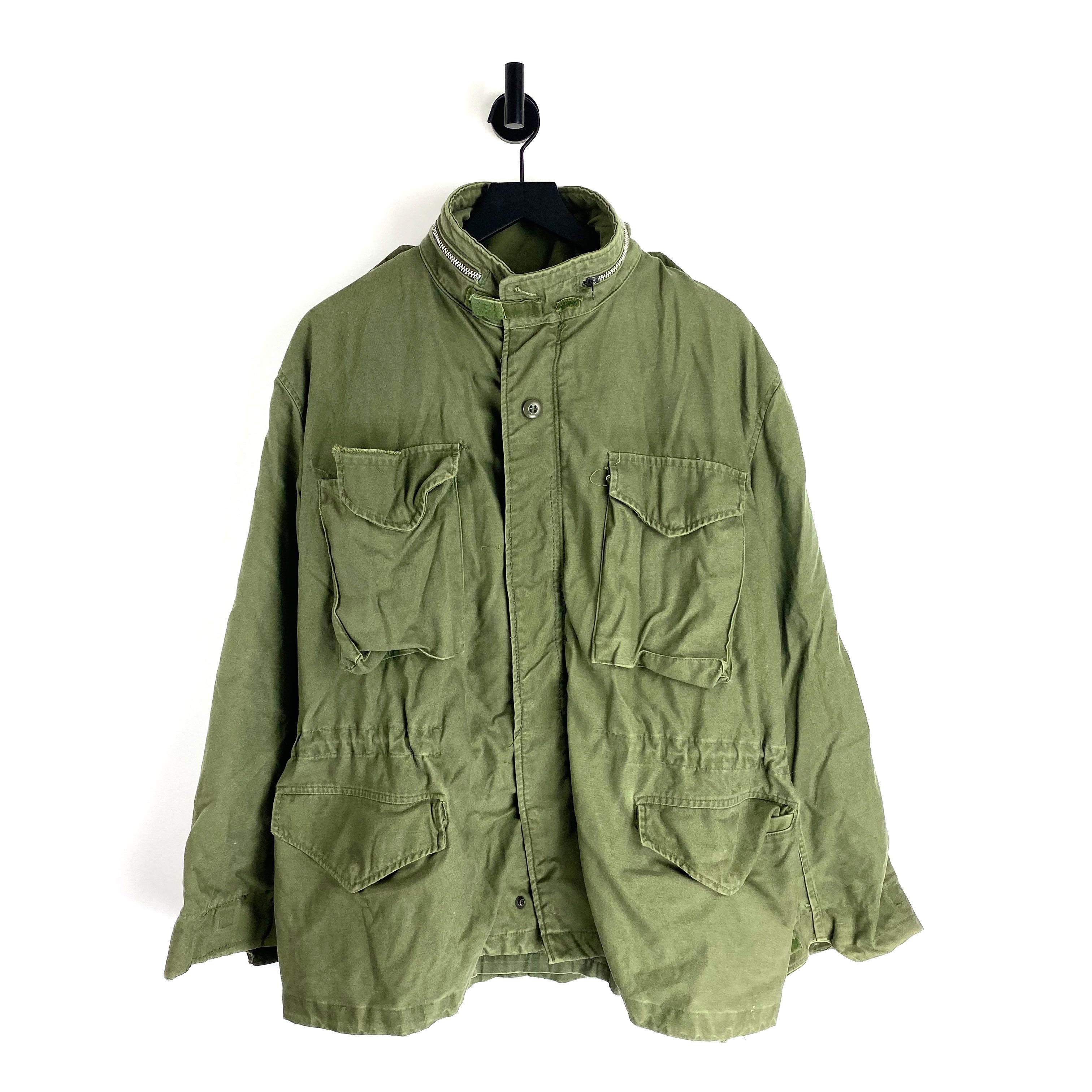 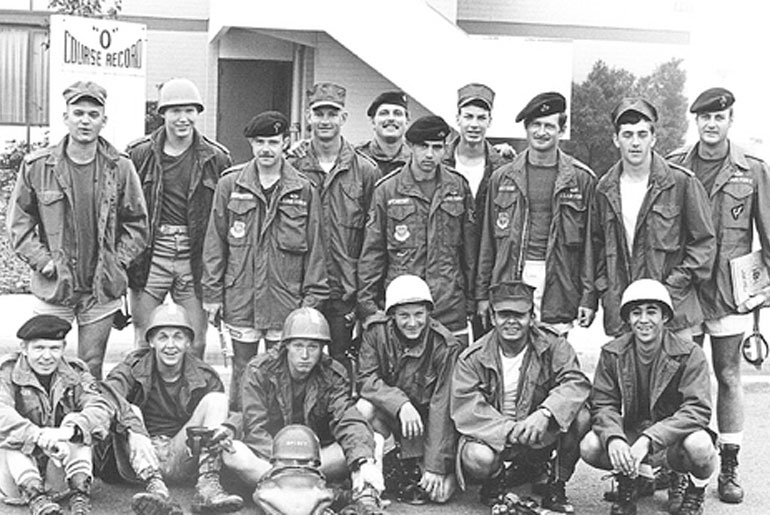 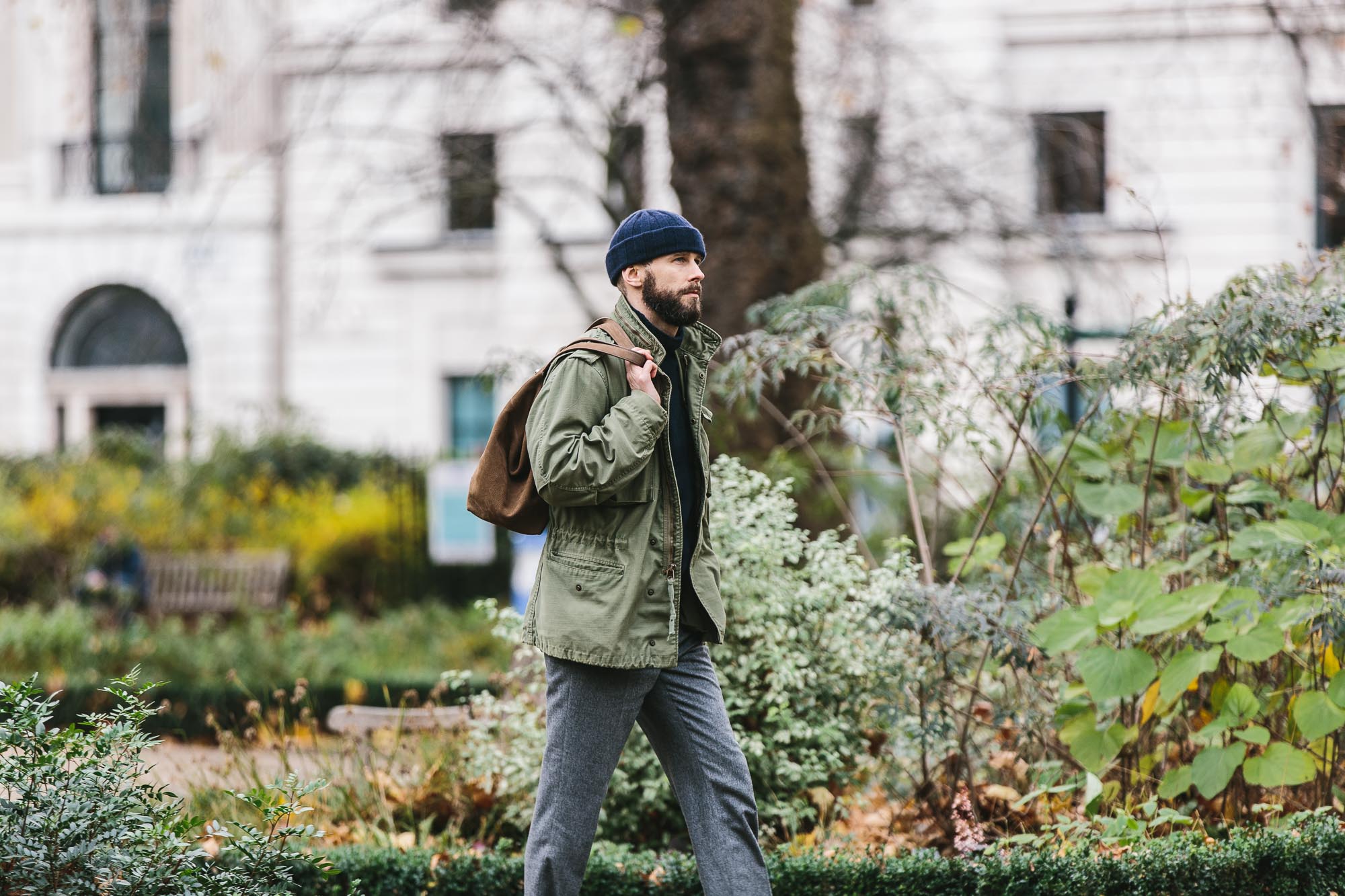 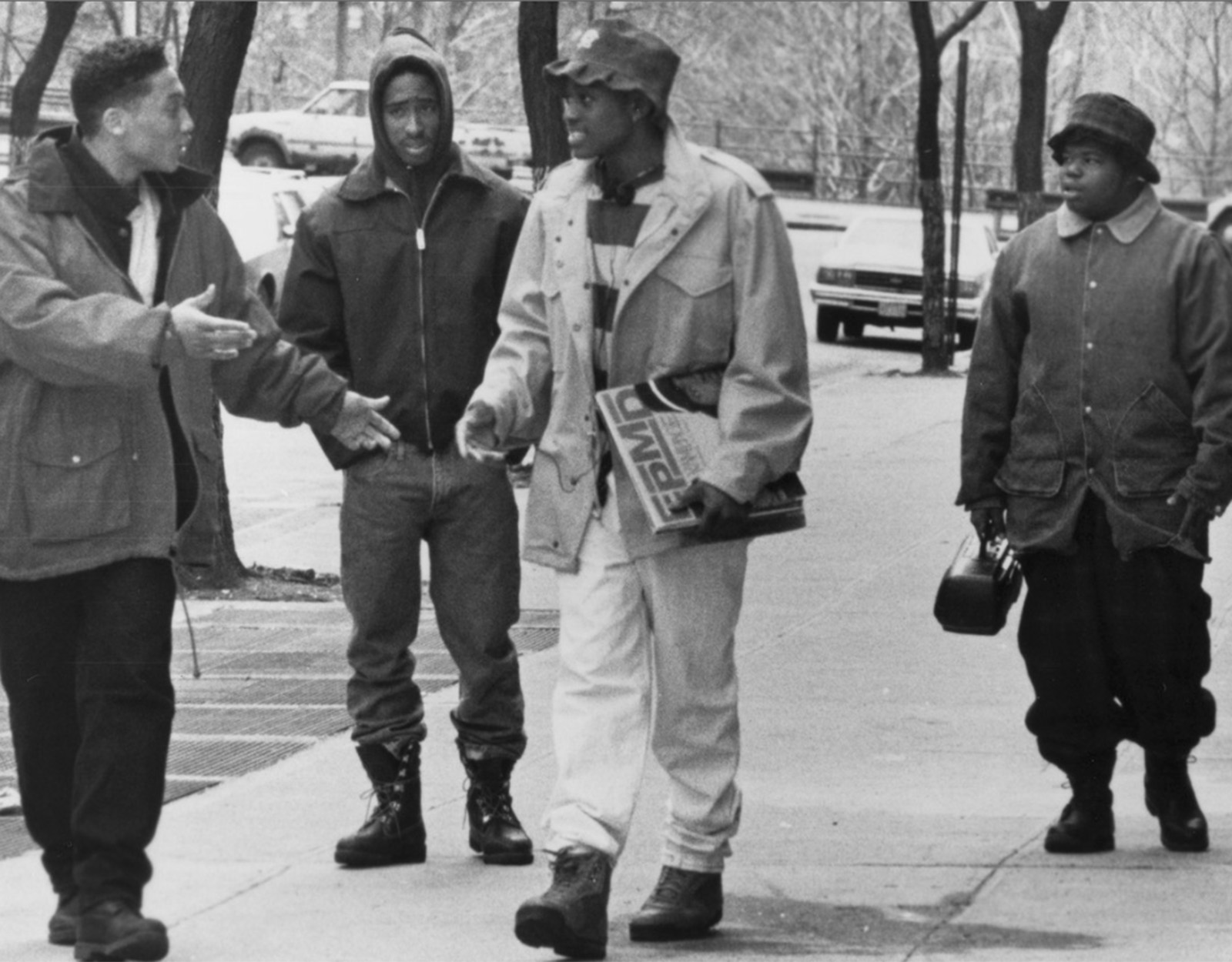 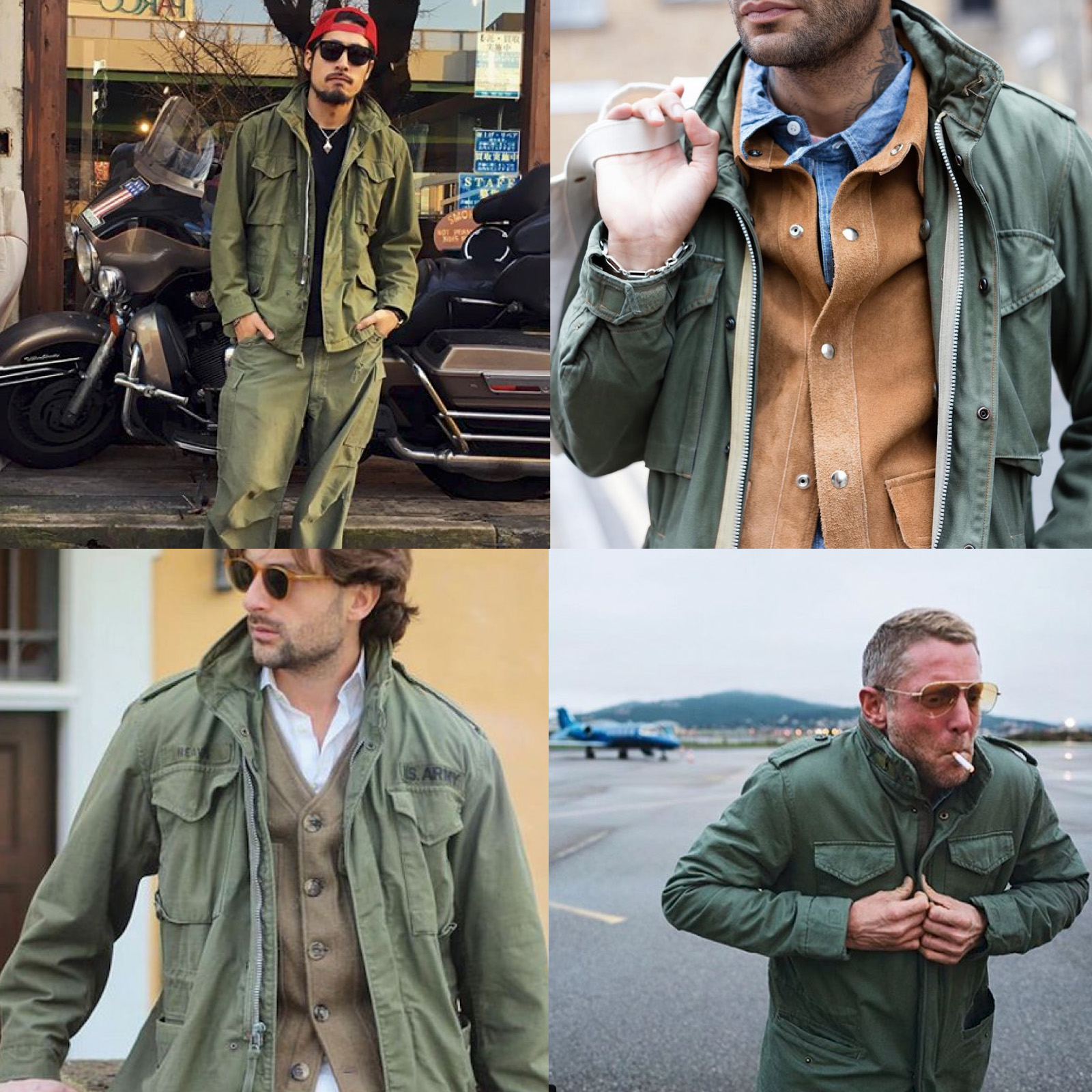 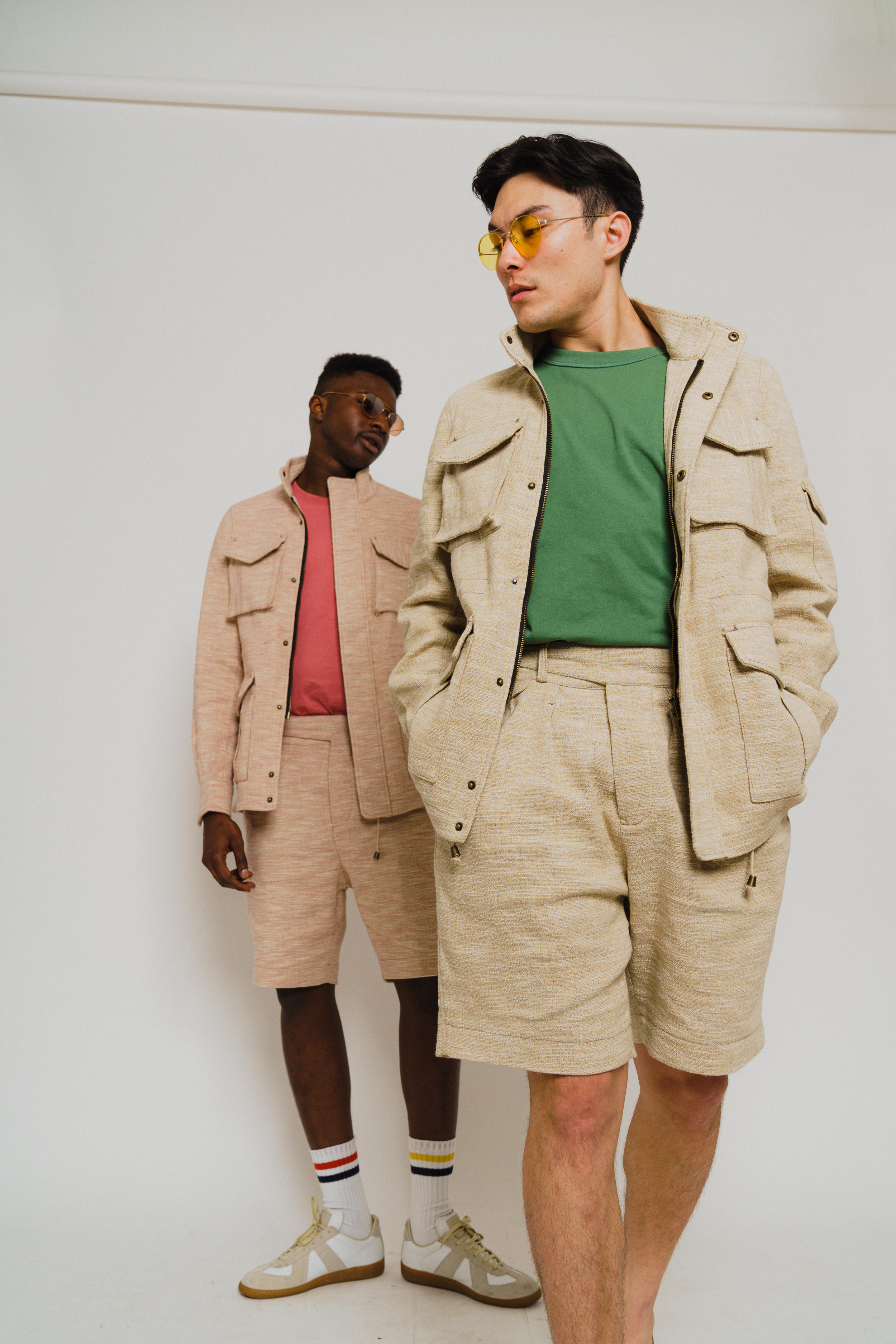 This latest drop was our first project with the field jacket, with the M-65 being the model we chose. Our model is even named the De Niro after Taxi Driver!  The design has been lifted straight from true vintage M-65 field jackets, with the same flapped pocket details (bottom two are pleated) and standing collar.  Like with our take on safari jackets, the epaulets were removed in order to make the garment less overly militaristic and more for everyday wear.

And for a special point of interest, the left arm has a pocket! Presumably used for bullets in the past, you could probably use it for pens or an extra iPhone charger.

There's also matching gurkha shorts that you can wear with it or a separates. 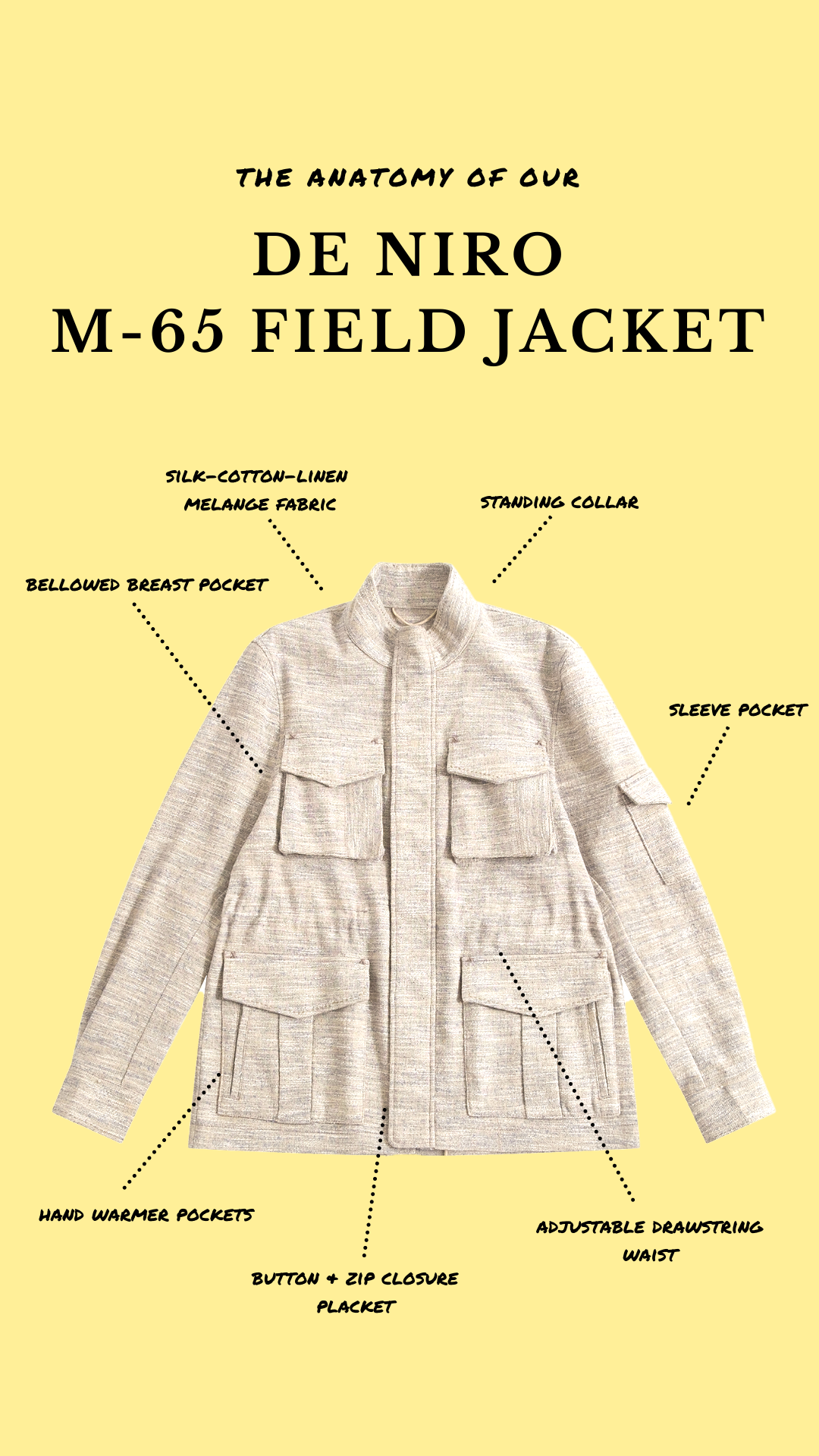 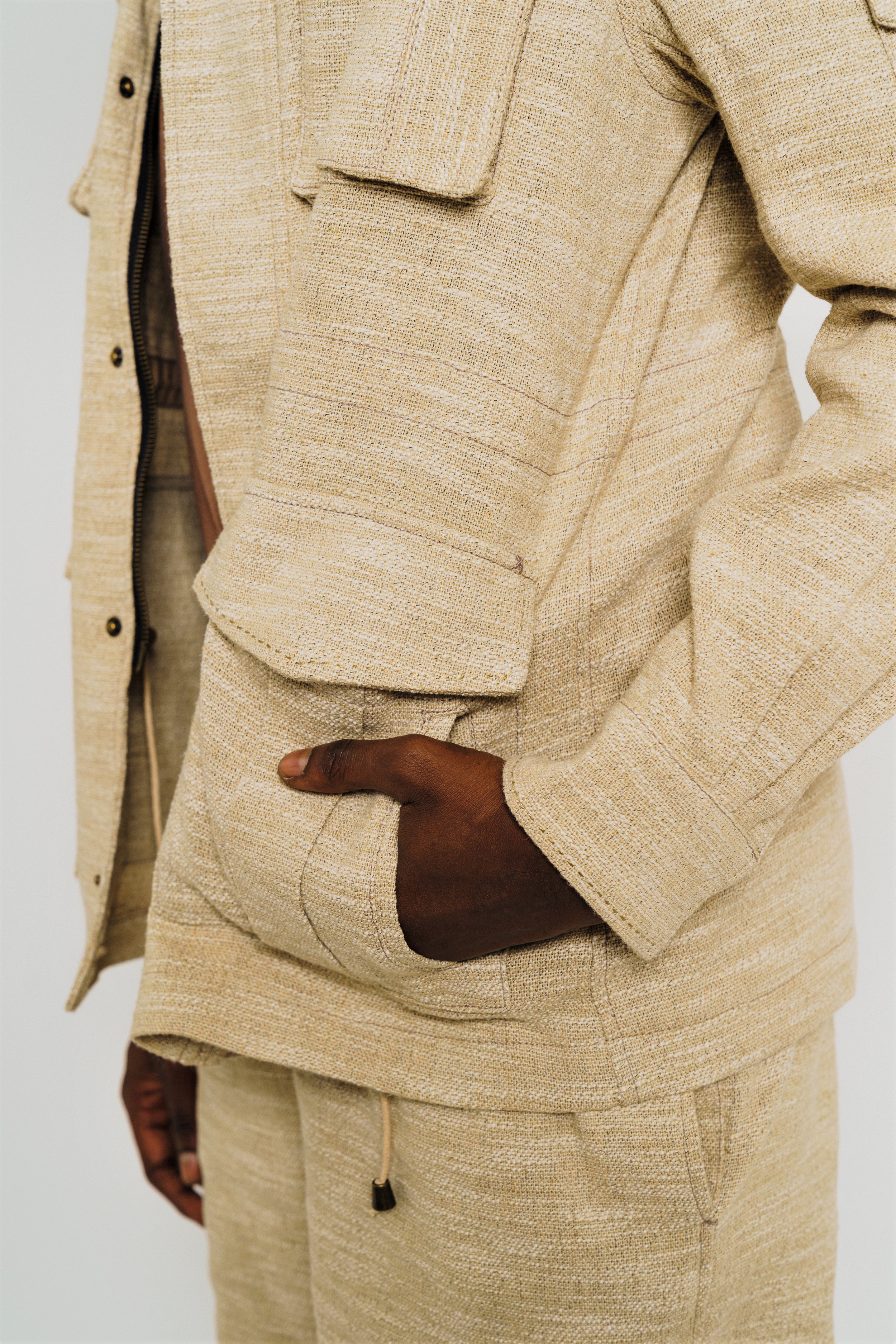 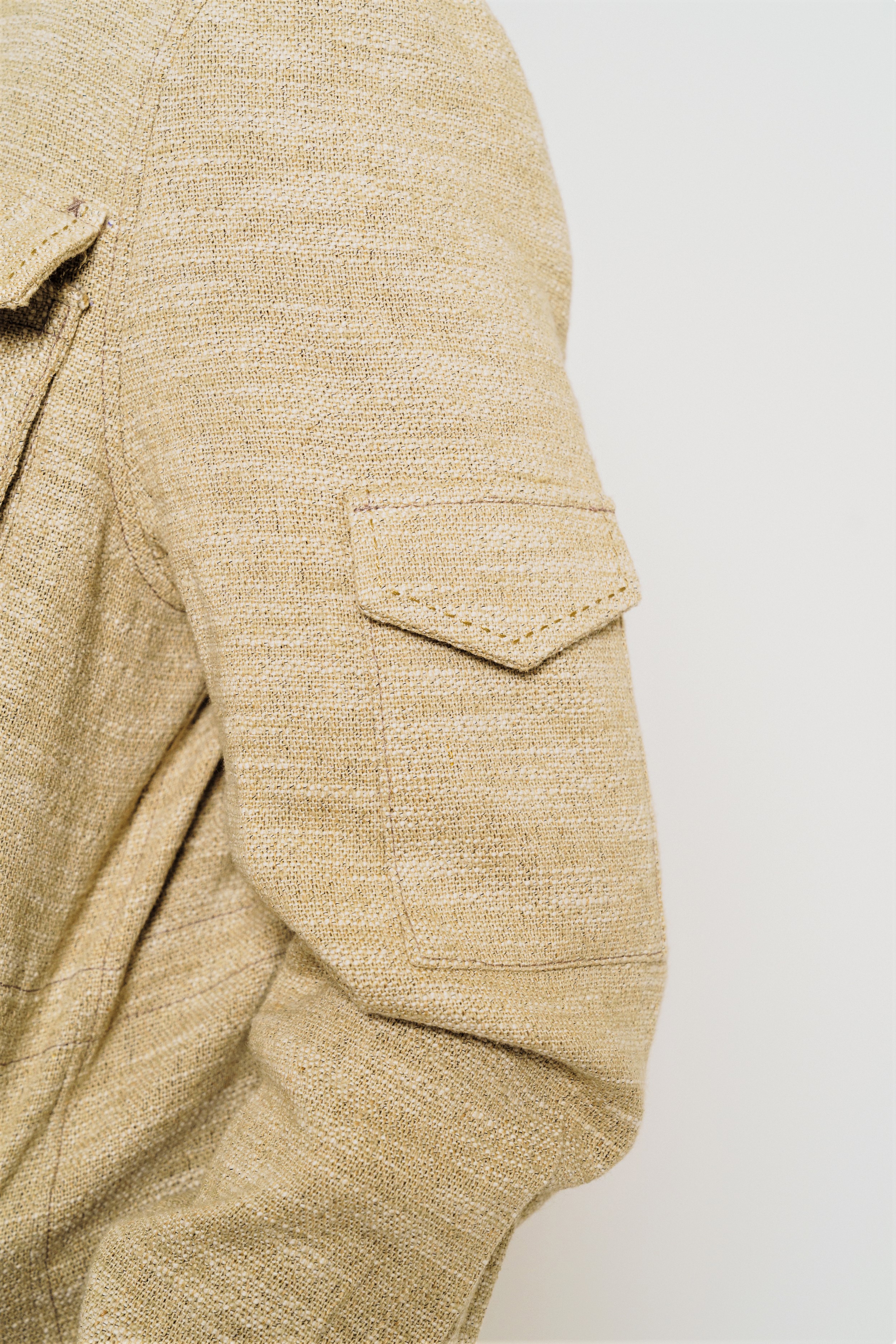 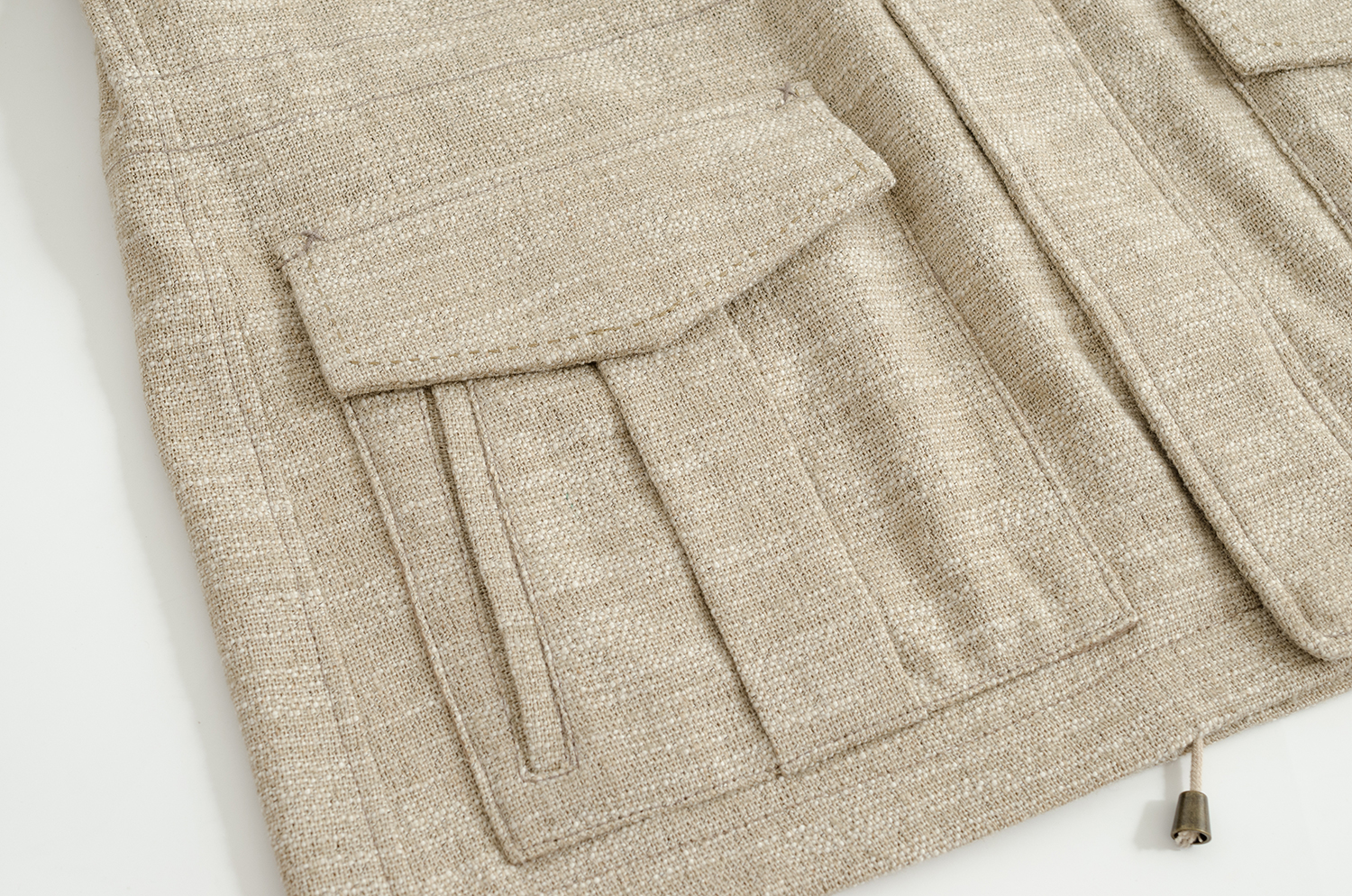 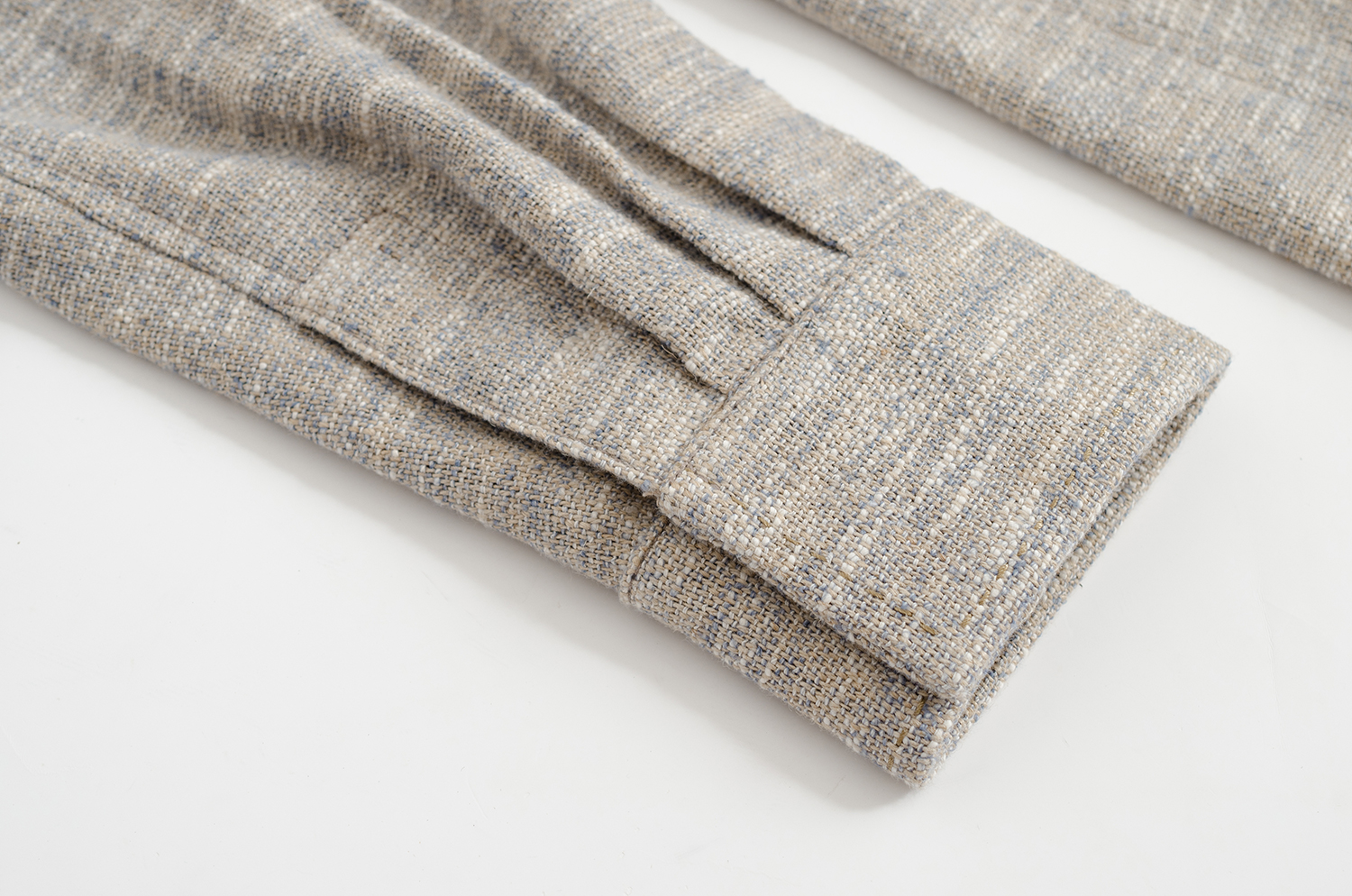 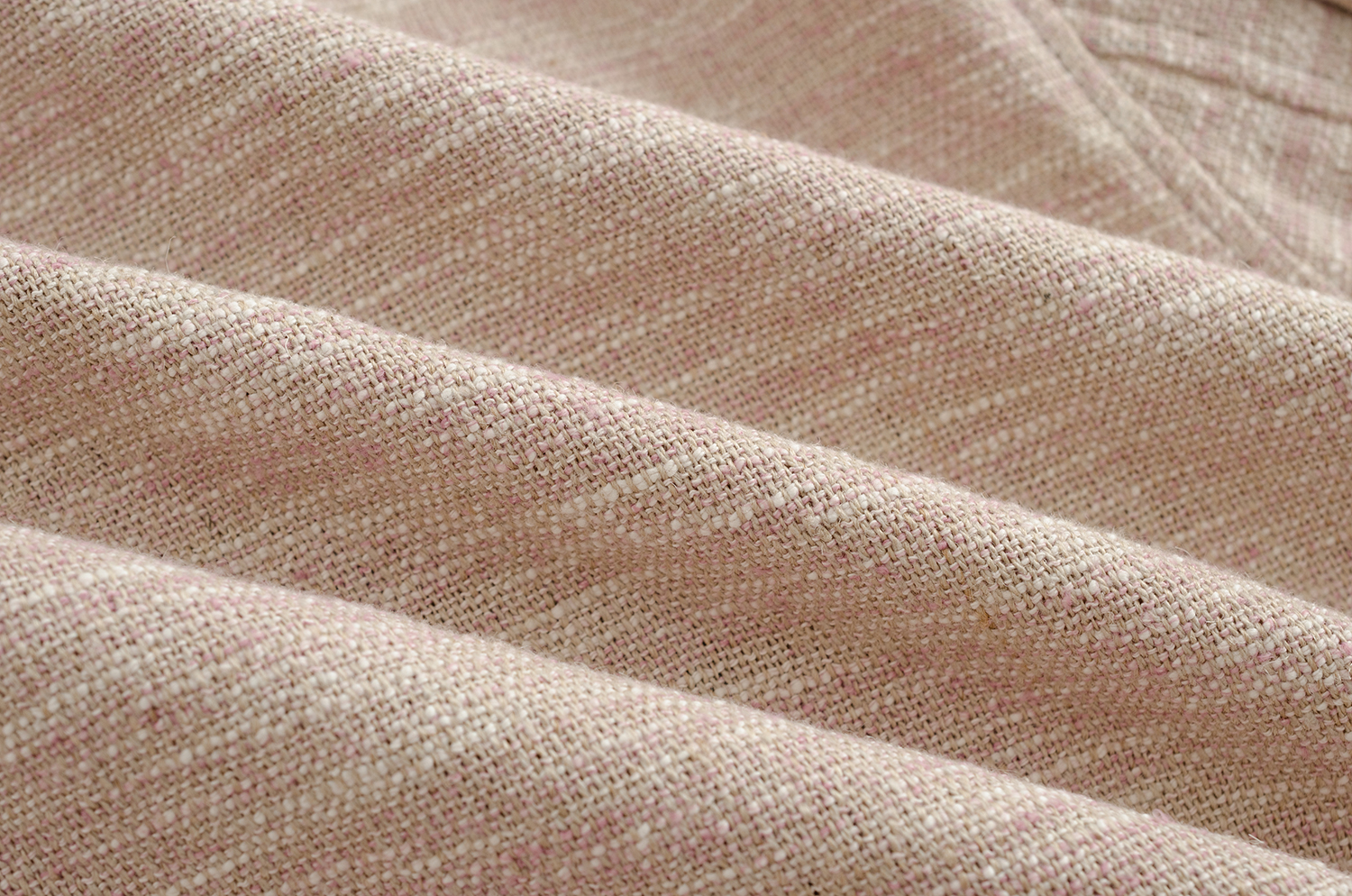 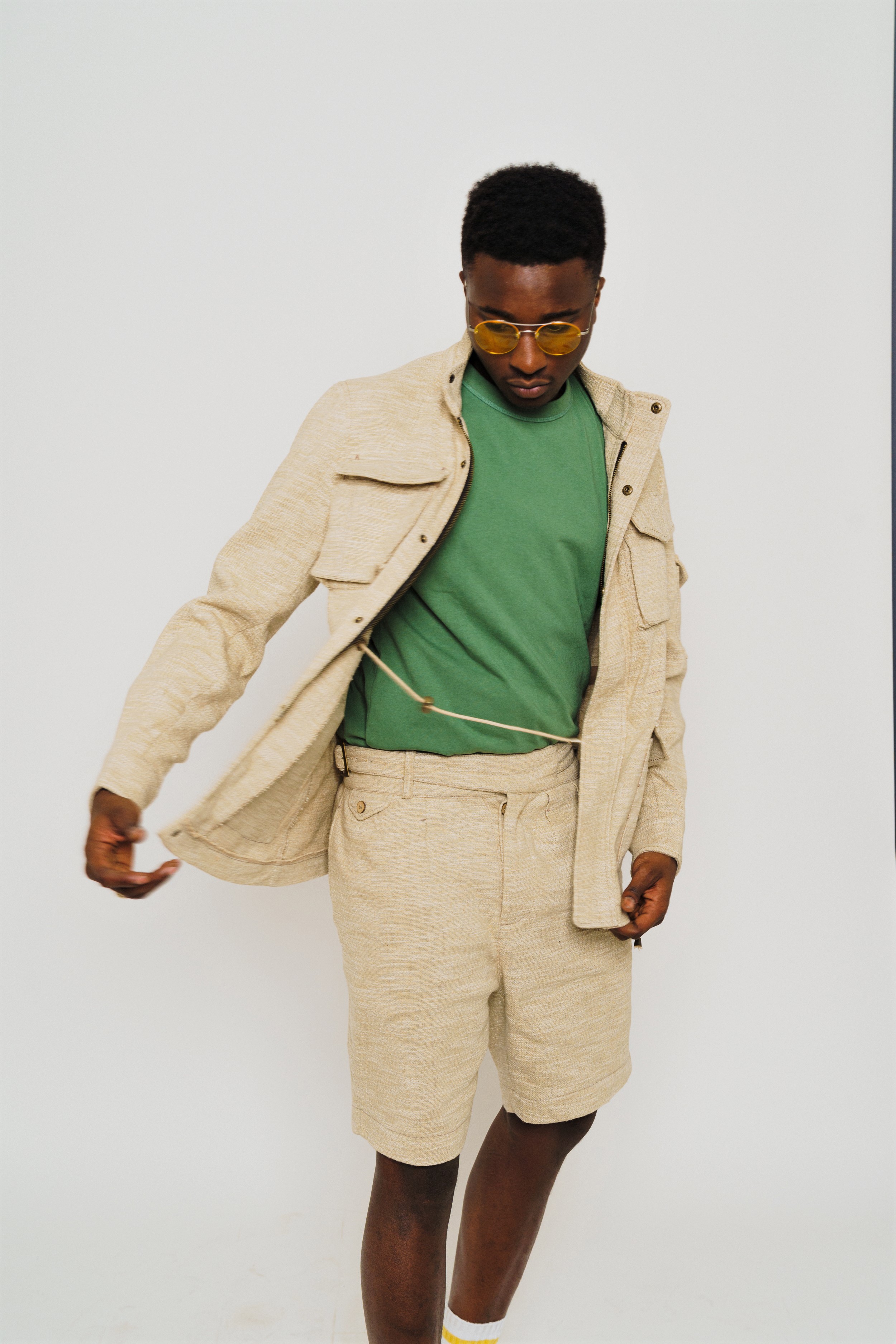 However, the real way our new field jackets are special is by the cloth we chose. Like we mentioned in our announcement post, having fun with summer cloth was one of our themes. Silk-linen in cream, blue, and pink melange results in a textured fabric that was a perfect choice for a garment that had largely been unchanged in decades.  We’ve even done our M-65 (and a special M-43 design) in Japanese selvedge indigo! 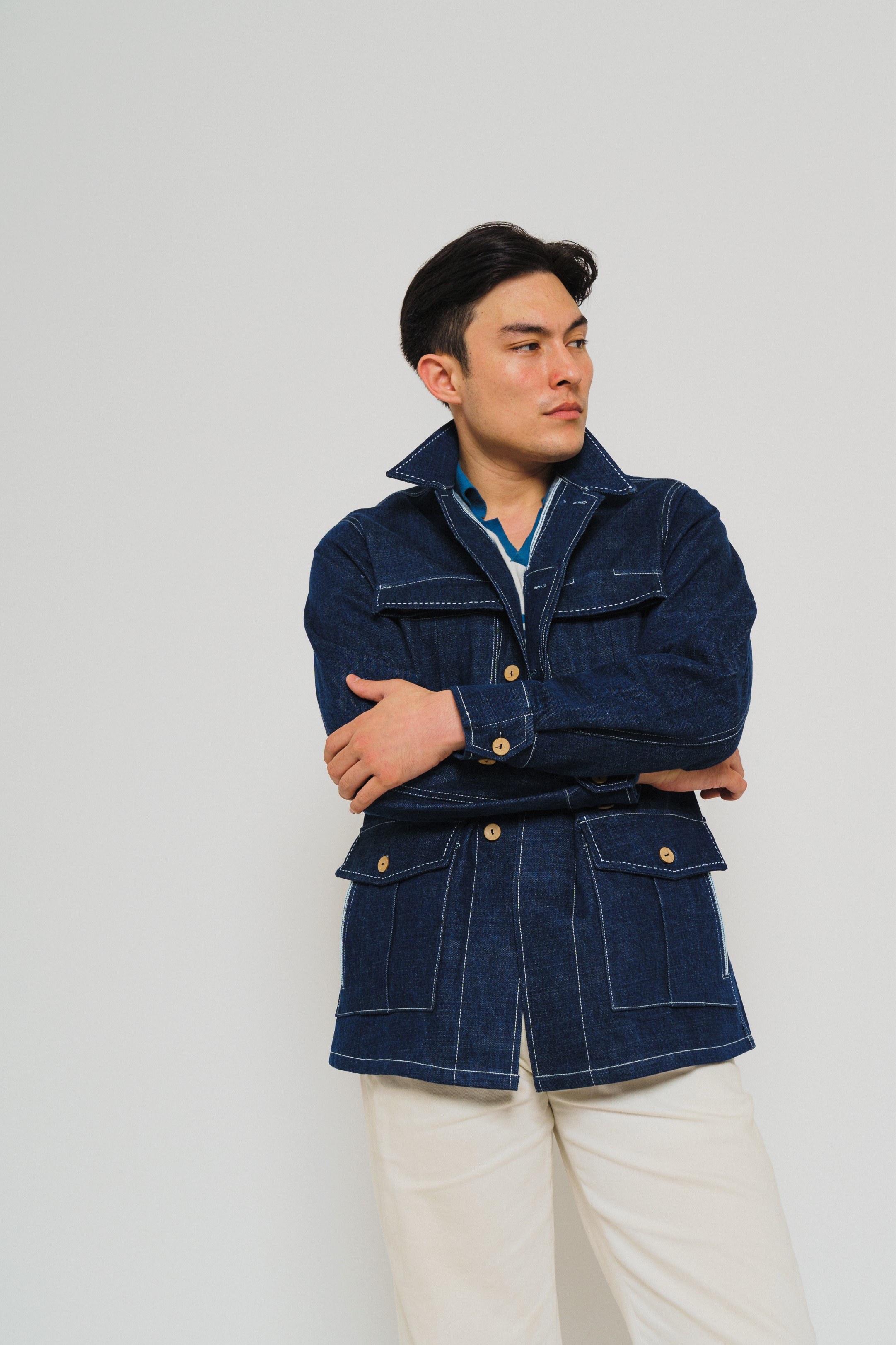 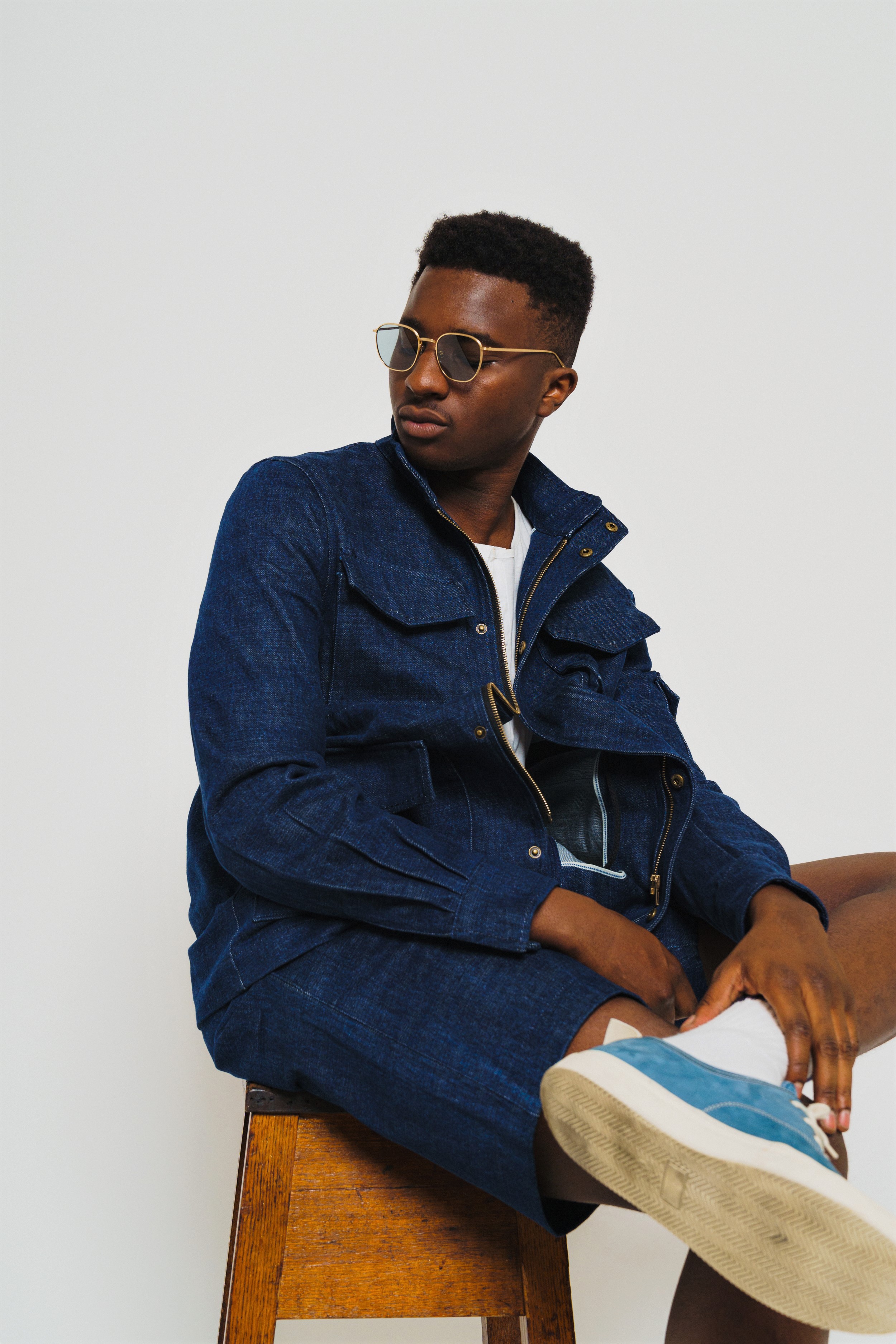 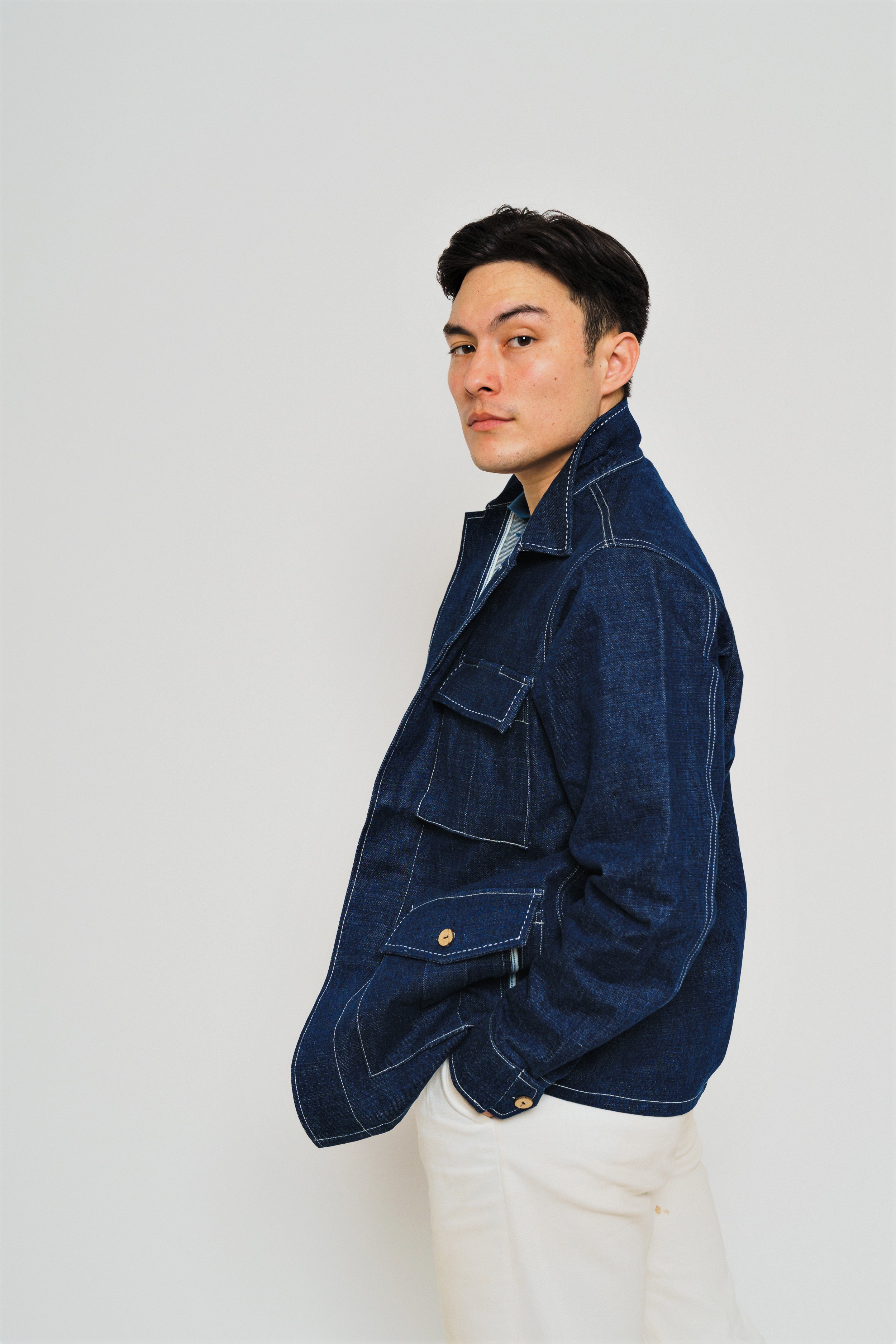 As such, we’ve also made the jacket completely unlined for the soft cloth to have it’s full effect.  Bar tacks and hand picked stitching are then done to emphasize this new, sartorially elegant take on a military jacket. You could even make the jump and get the matching gurkha shorts to make a summer "suit" that you’ll actually love to wear in hot weather. 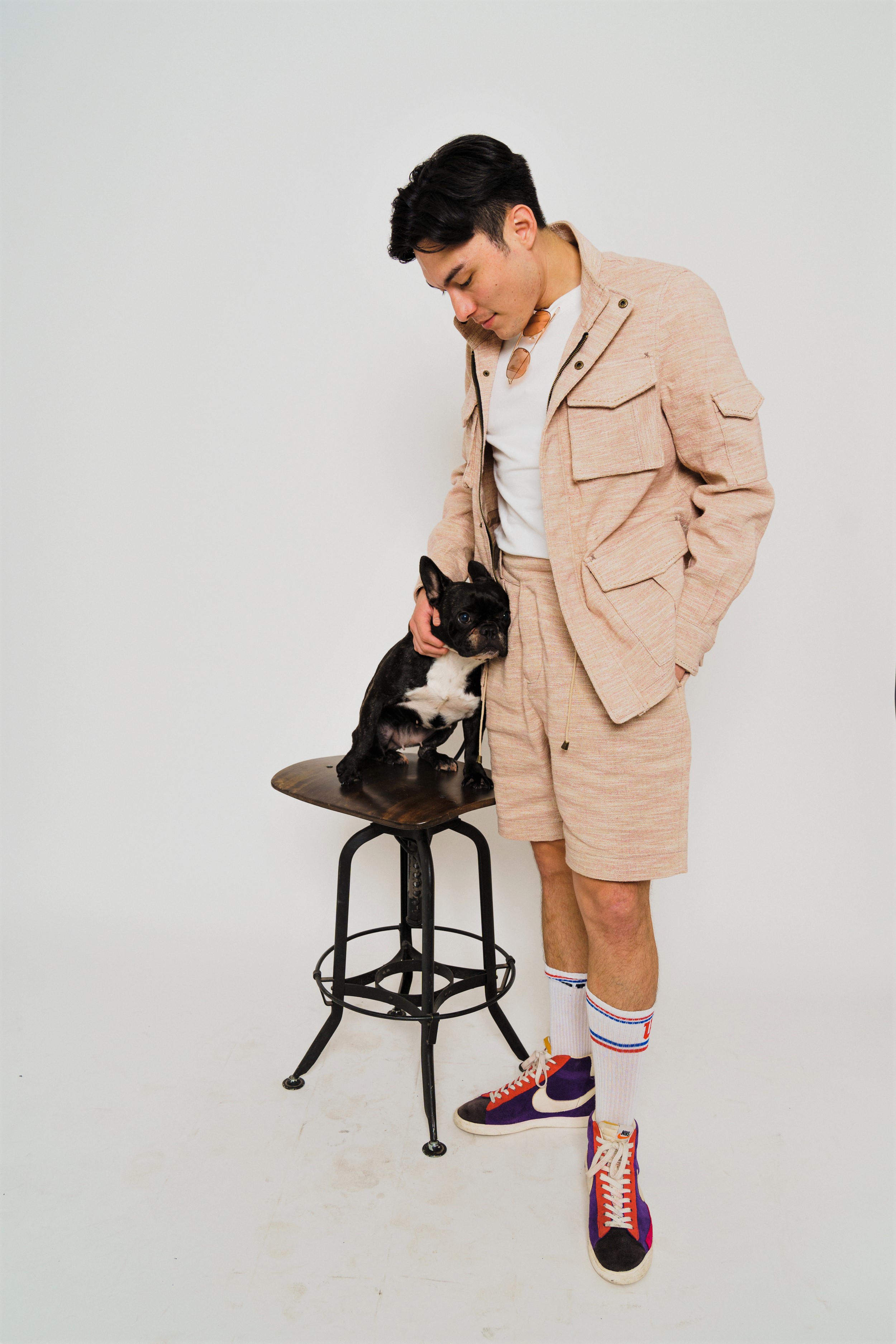 All of these qualities, from the textured silk-linen to the luxurious finishing make our field jackets something special. Taking inspiration from the past and updating it for a new generation of classic menswear enthusiasts is our goal, and we think we’ve accomplished something special with our summer field jackets. So go get one and get that true war vibe this summer.  I’m just glad that there's finally a field jacket that isn’t in drab green for once.