Denim jackets. A rugged piece of outerwear that some men struggle with adding to their classic wardrobes. But what if I told you that the King of Rock & Roll wore one? And that we’ve produced a special version in our trademark MTO suede?   Pretty soon you’ll be wearing yours with both your jean/boots looks and your dressier trousers/loafers.

Almost as cult-like as the A-2 but not as rare as the A-1, denim trucker  jackets are one of the coolest things a man can wear.   While denim jackets have been made all around the world for workwear, it wasn’t until Americans produced theirs (and wearing it with everything) that it started to become an all around staple of casual men’s fashion. 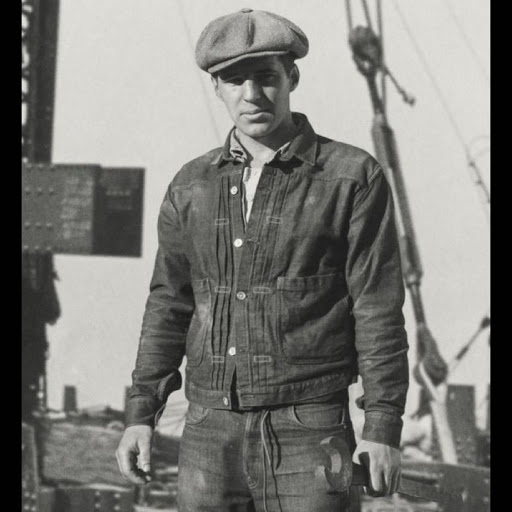 Unlike the other pieces we’ve talked about before, like the safari jacket or the shearling bomber, the denim trucker jacket does not have its roots in military clothing. Instead, it was developed as workwear, meant to be worn by railworkers, handymen, mechanics, and the like.  It wasn’t even considered casual wear!  Guys would wear it with matching denim pants when doing work around the house and then change into a sportshirt and slacks when they wanted to be truly casual. However, this soon changed. 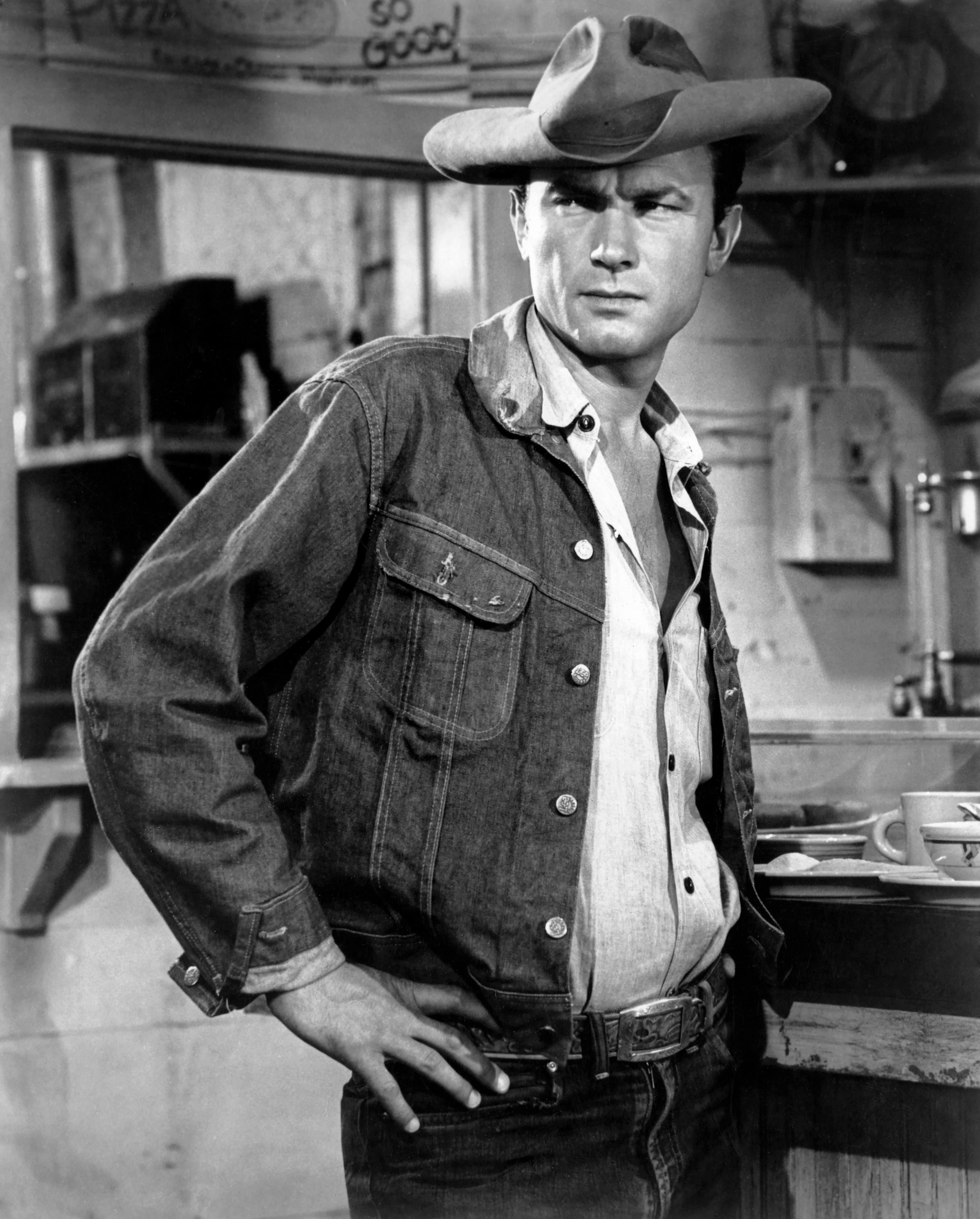 During the 1950s, we started to see a change in menswear. With actors like James Dean changing the image of leading men from a fancy, suit wearing gentleman to a multi-faceted guy who was just fine in casual clothes and even workwear, Americans began looking at casual menswear differently. Soon, white tee shirts, jeans, and a rugged jacket became the uniform of youth. For that rugged layer, some went with leather jackets. Others went with windbreakers.  But many, deciding on to wear the same fabric as their favorite everyday pants, went with the denim jacket. Soon, the whole world went casual, and the denim jacket followed. 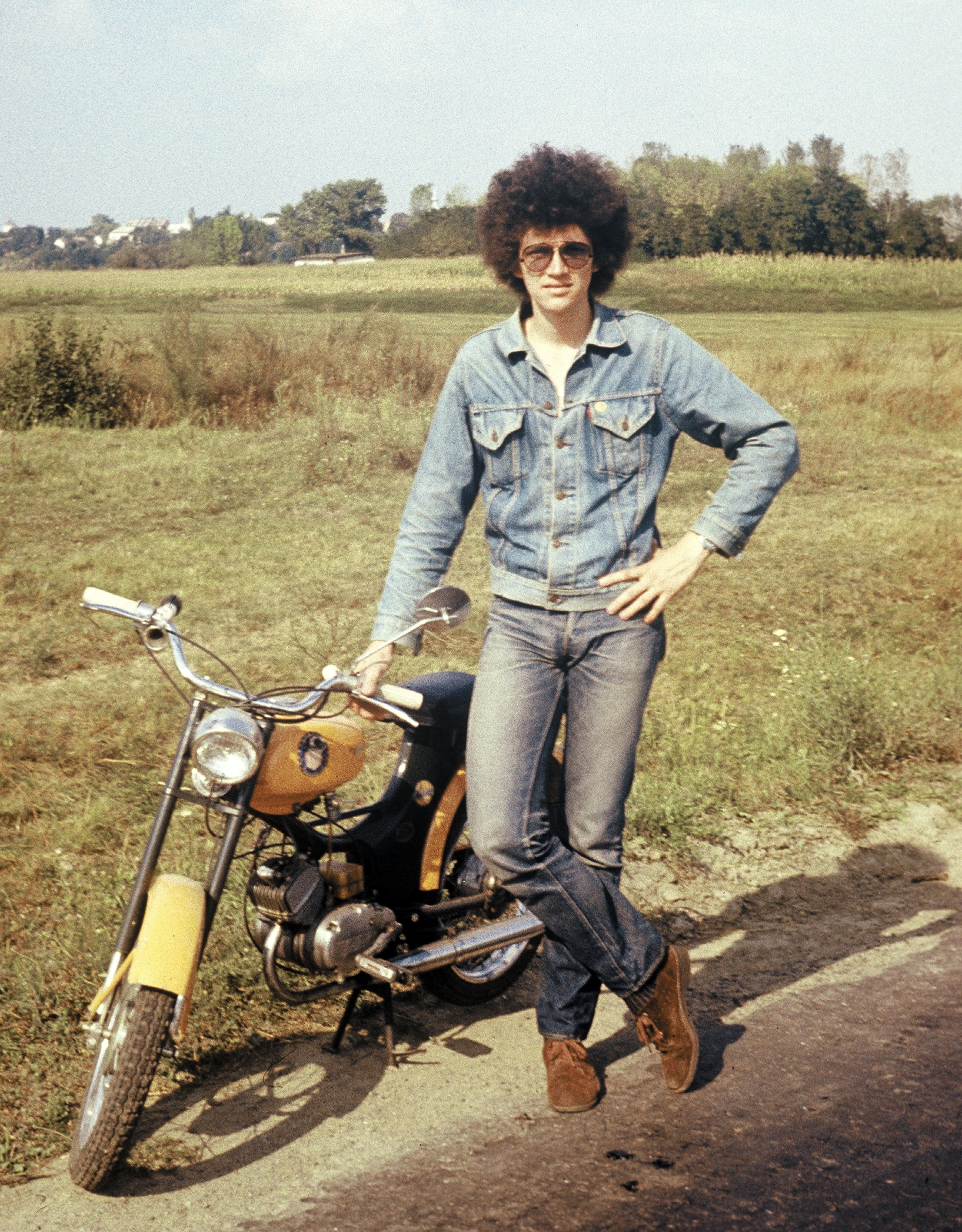 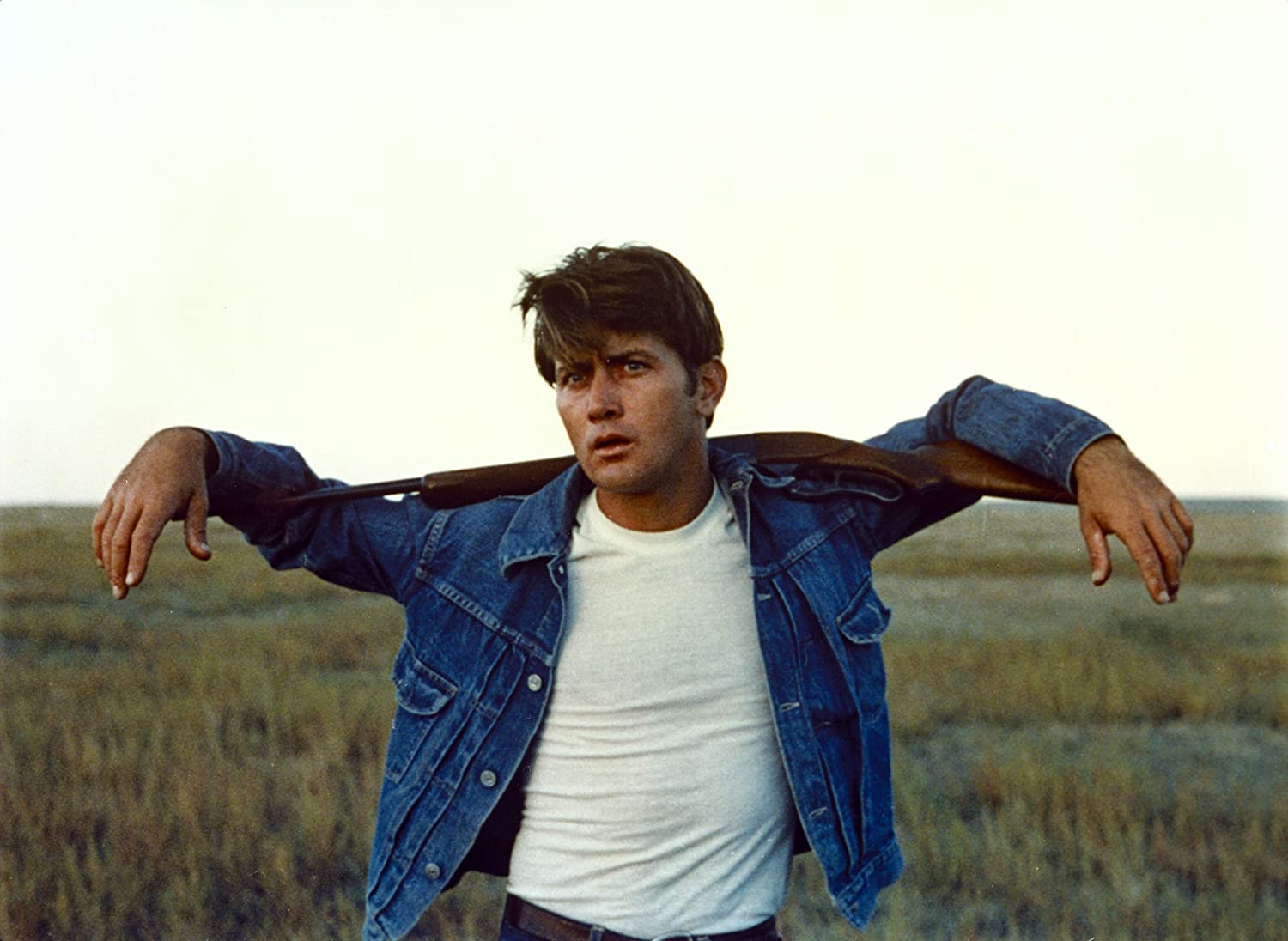 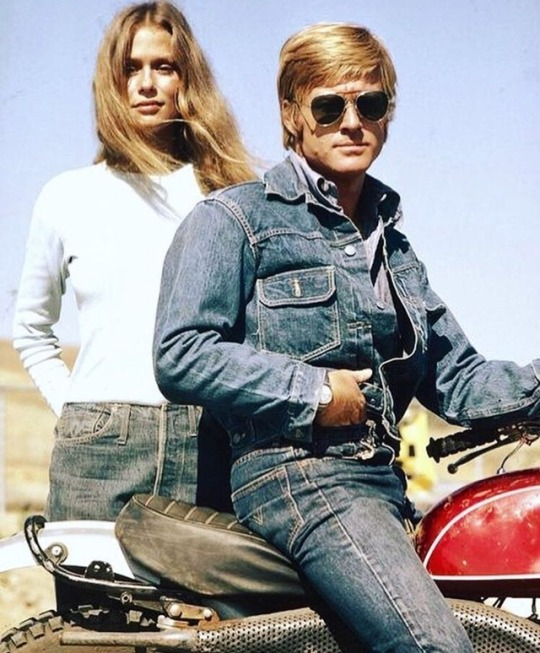 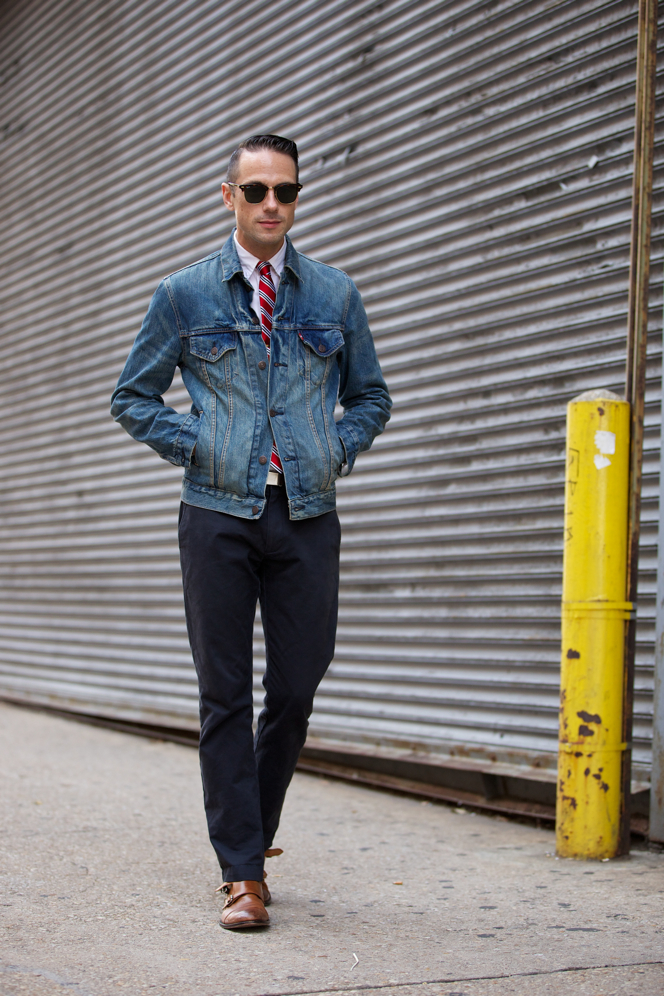 He Spoke Style mixing a denim jacket with trousers. 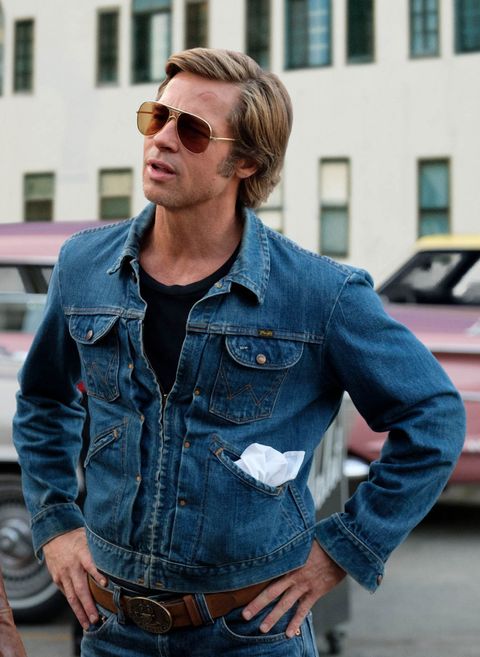 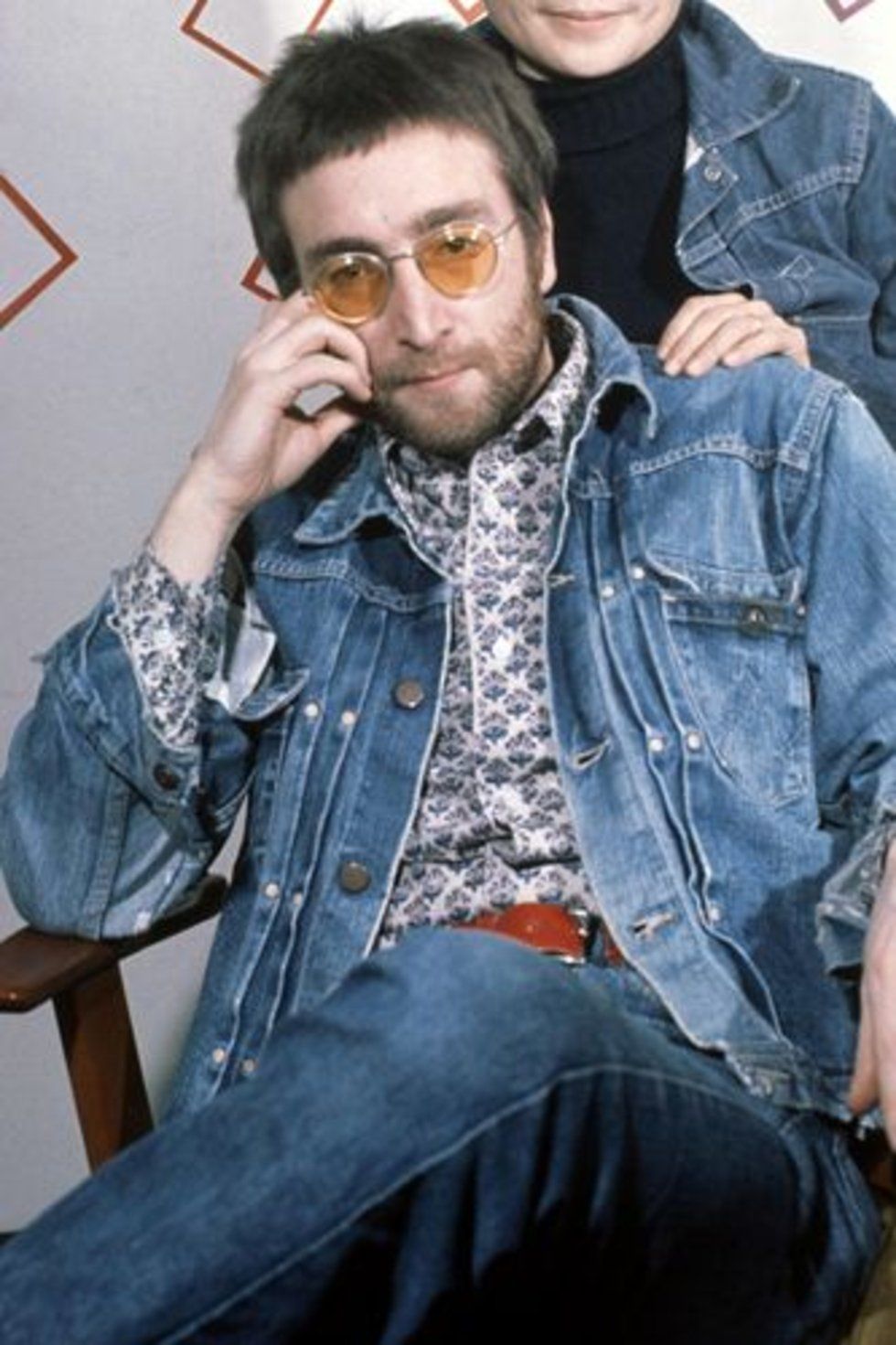 With all the different makers of workwear, there were many variations of denim jackets to choose from. Lee and wrangler made some great ones that were mainly for the workwear or westernwear crowd, which are still worn today by niche groups of menswear. However, as you could expect, it was Levis who created a monopoly on the denim jacket and their designs are worn (and copied) by countless men the world over. 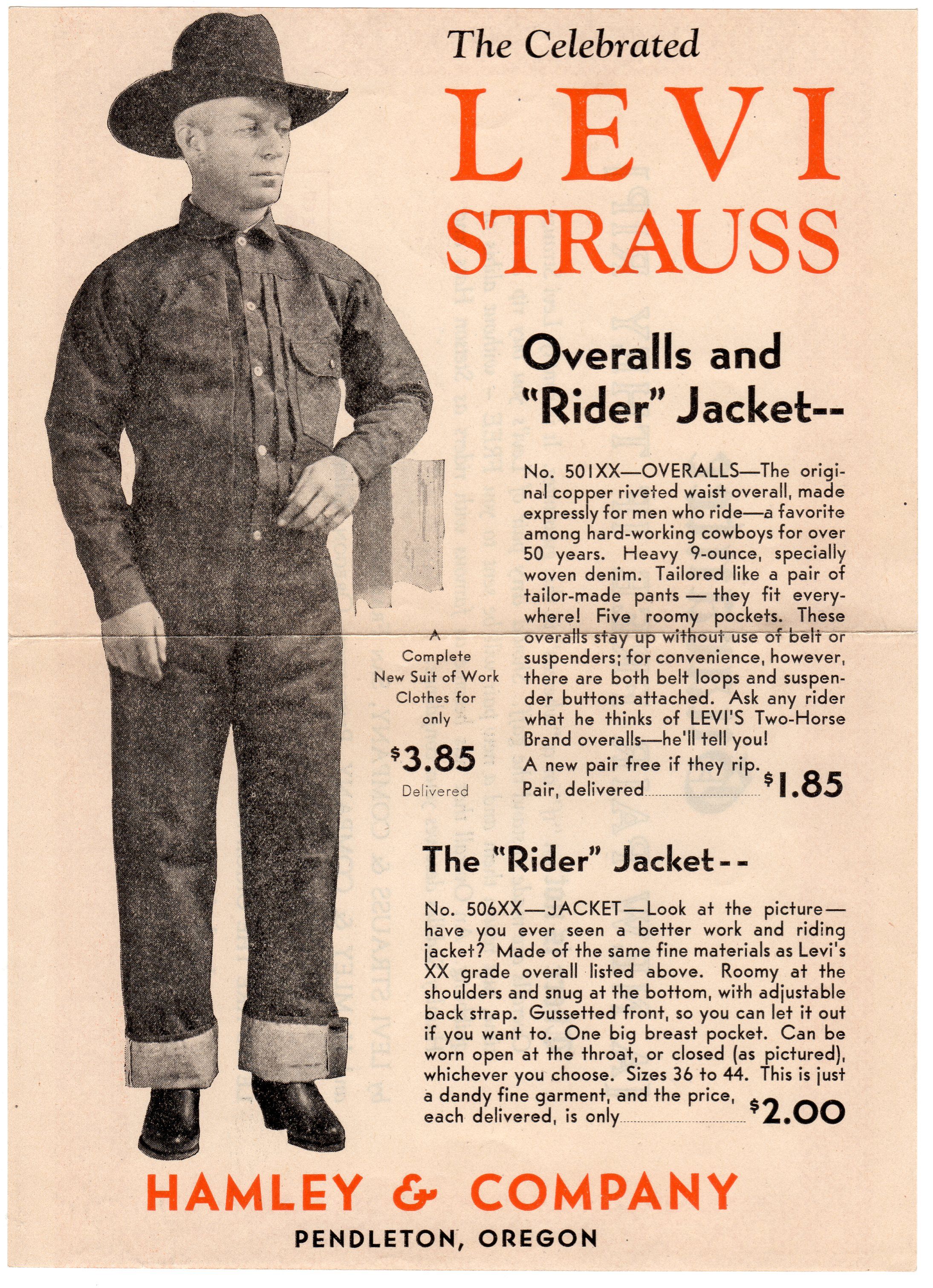 Levis made three iconic models of denim jackets, which you can read more in depth by our pals over at Heddels. The Type I was very typical of workwear in the early 1900s, featuring a pleated front and a single button flap pocket; it also had a pleated back with a belt to adjust for the size.  The Type II came in the 1950’s and now had two front pockets! Instead of a belt back, they now started using button side adjusters.  And lastly, there was the Type III which became the most famous one.  This model was developed in the 1960s and was completely different than the Type I and II.  The Type III became known as the trucker jacket and did away with the pleated fronts and workwear designs, utilizing a slim fit to go along with the changing times. 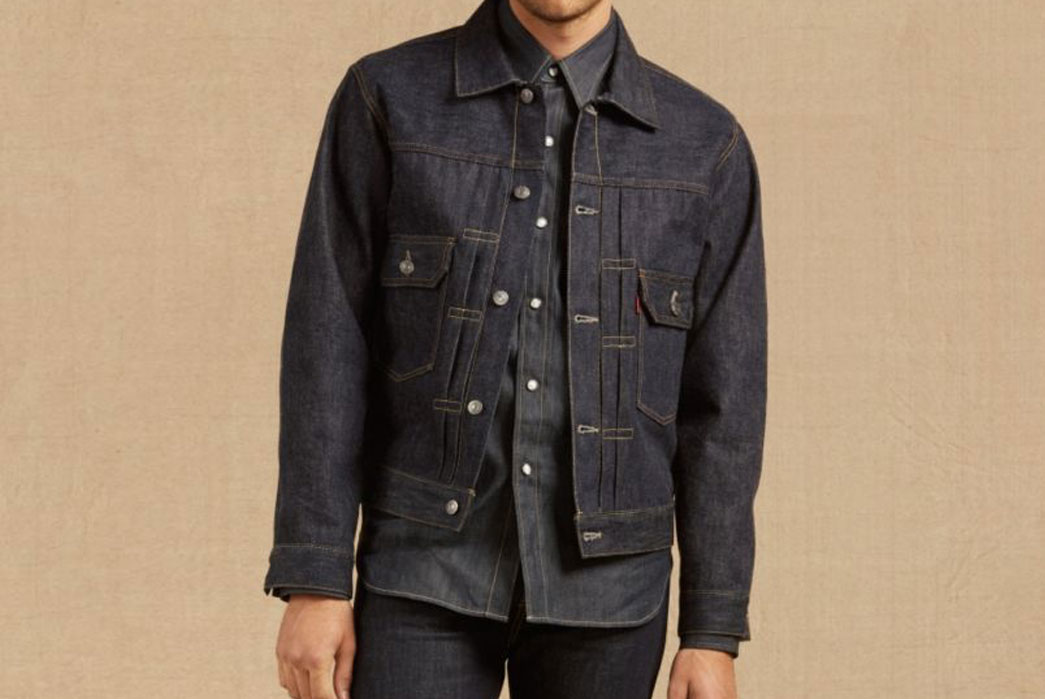 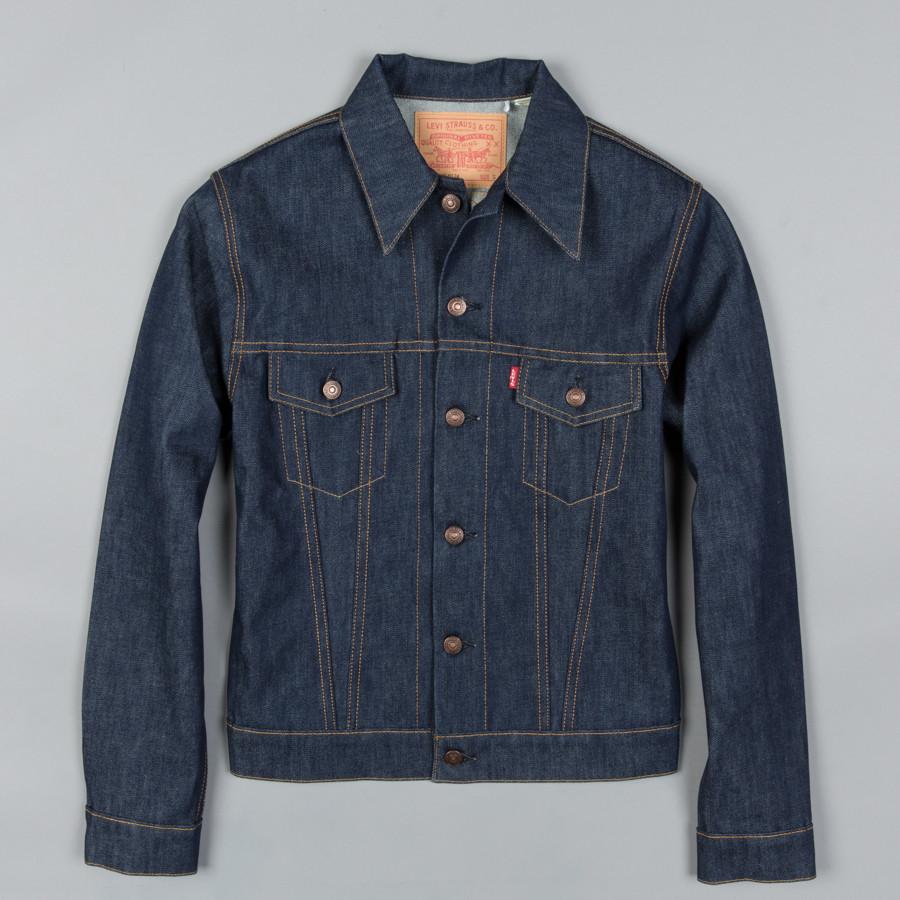 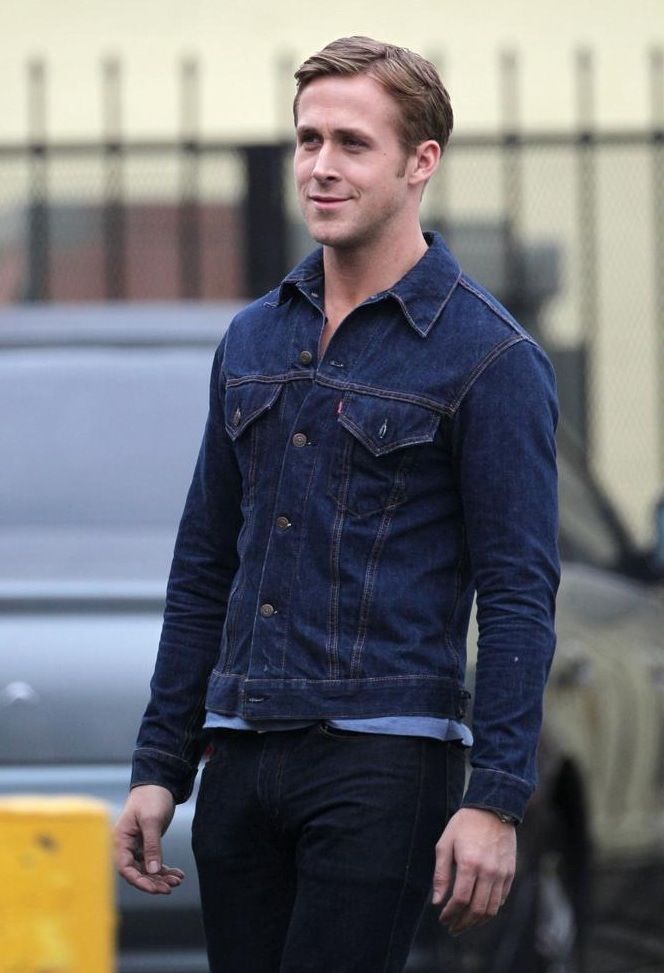 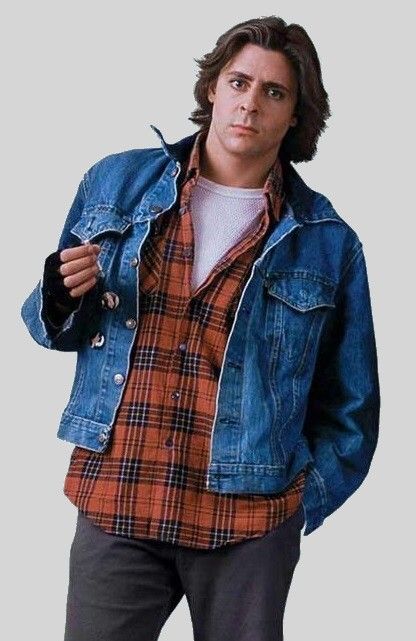 Despite the Type III being the most famous, notable for being worn by countless hippies and punks to movie icons like Judd Nelson in The Breakfast Club or even Ryan Gosling in Drive (yes, we know he also wears a sukajan), we at Craftsman have always been drawn in by the older, more vintage designs.  It’s why we’ve brought back grizzlies and safaris. So when going after inspiration, we were actually attracted to the Type II.  More specifically the one worn by Elvis Presley. 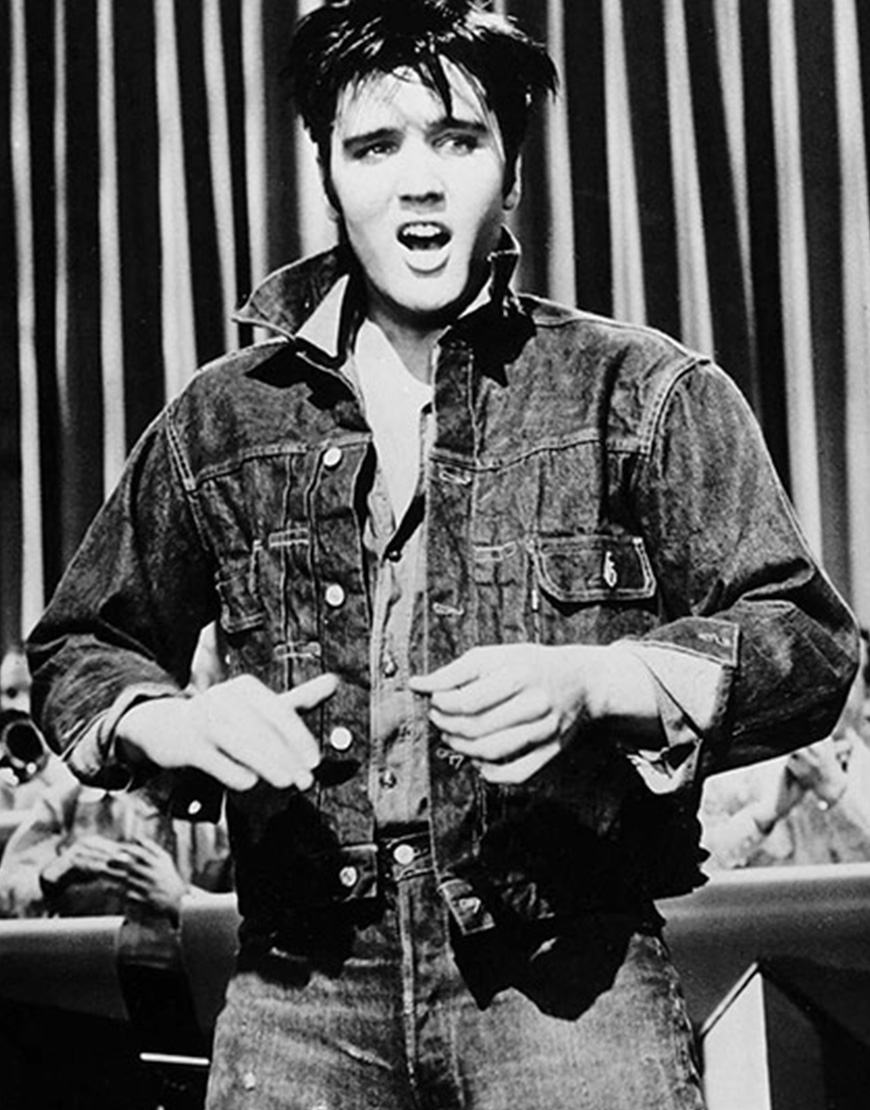 There’s just something interesting about the Type II that we just love.  With it’s pleated front, cropped silhouette, and chest pockets (there are no hand warmers), the Type II has a unique vintage charm that sets it apart from the rest of the denim jackets worn by everyone else.  I think that’s why Elvis looks great in it; despite being a star in an era of suits, he opted for the outfit of the working man, pairing the Type II with some nice blue jeans and a chambray shirt.  It’s casual, but it looked so good and certainly contrasts against all the other denim jackets we’ve seen in recent history. 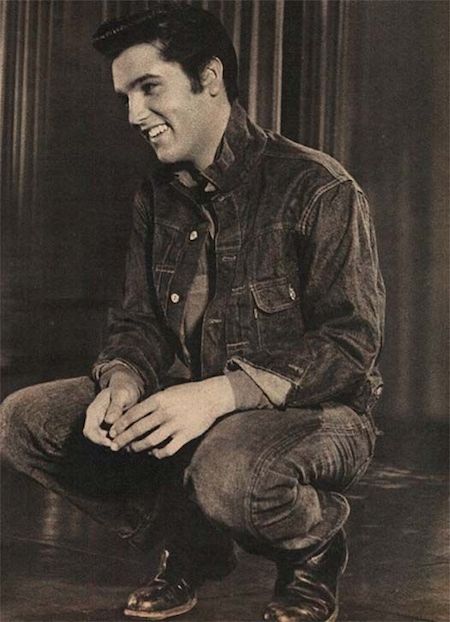 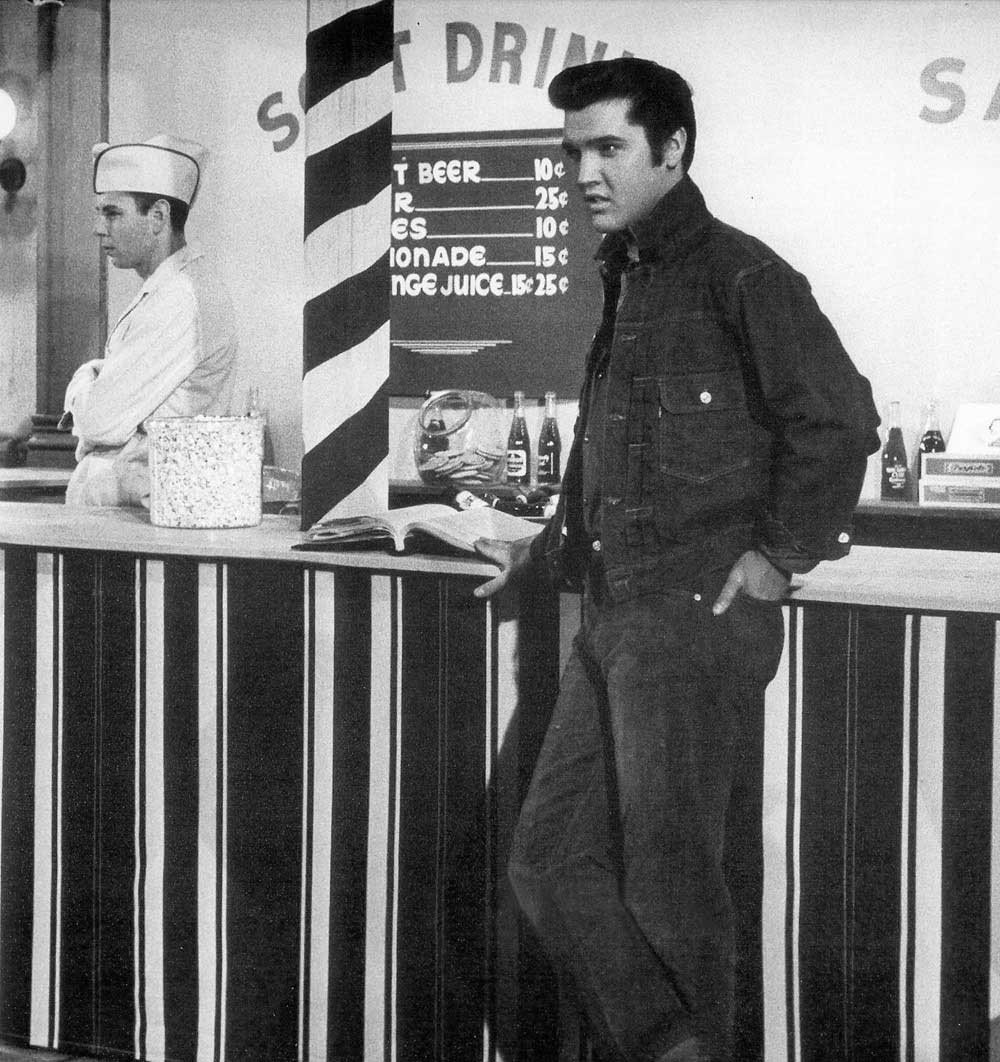 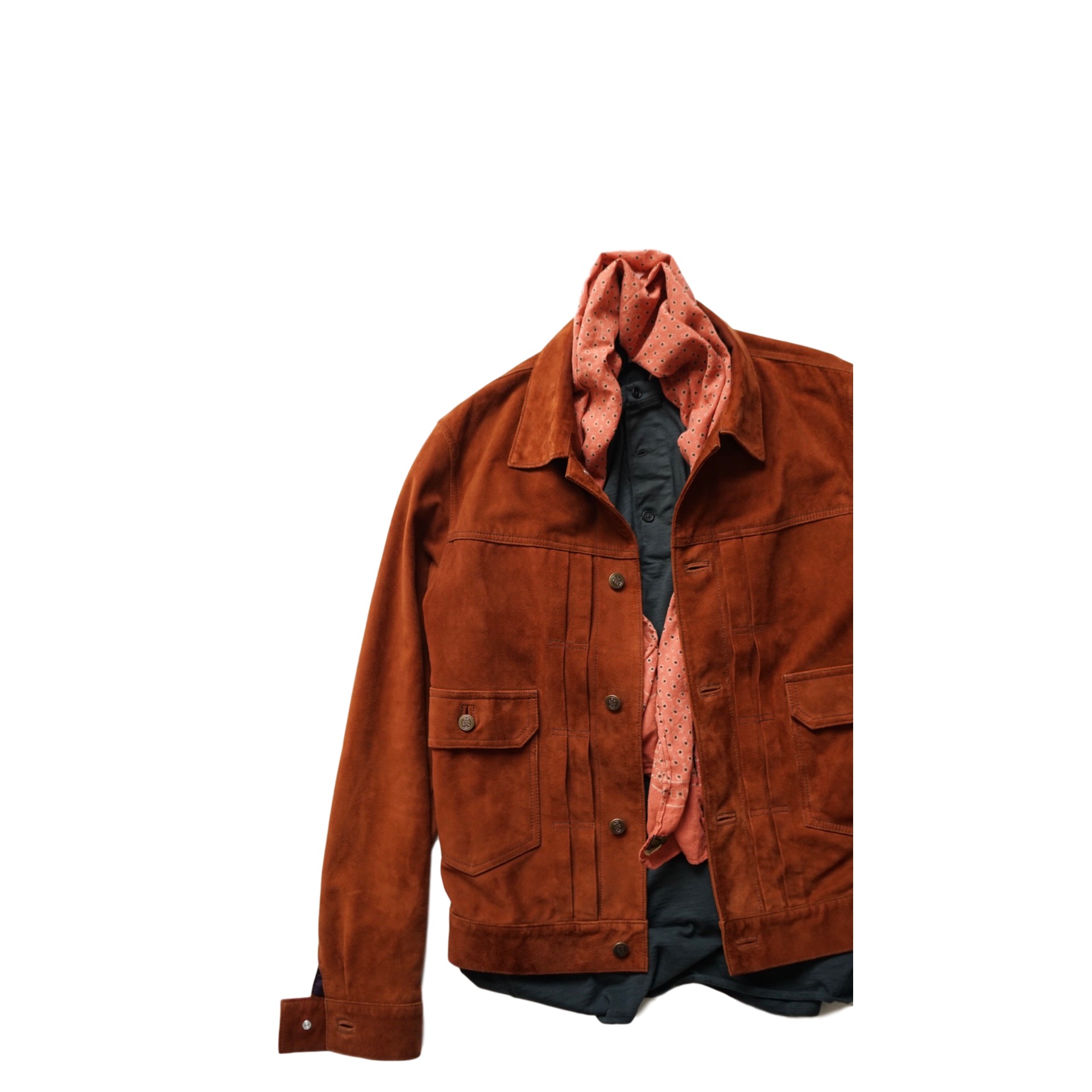 Obviously, we had to give this denim jacket our own Craftsman spin with the Presley Trucker. And since we don’t want to compete with Levi’s, that meant doing away with denim and putting the jacket in our favorite fabric:  suede.  Doing this in suede gives this workwear jacket a refined spin, making it much more appropriate for young gentlemen who want to look rugged while retaining a sartorial spin.  The best part is that this combination of a casual design with a louche fabric is that you can wear it with jeans and your pleated trousers or even your boots and your belgian loafer.  Gurkhas are also a great choice too, though you probably expected that. 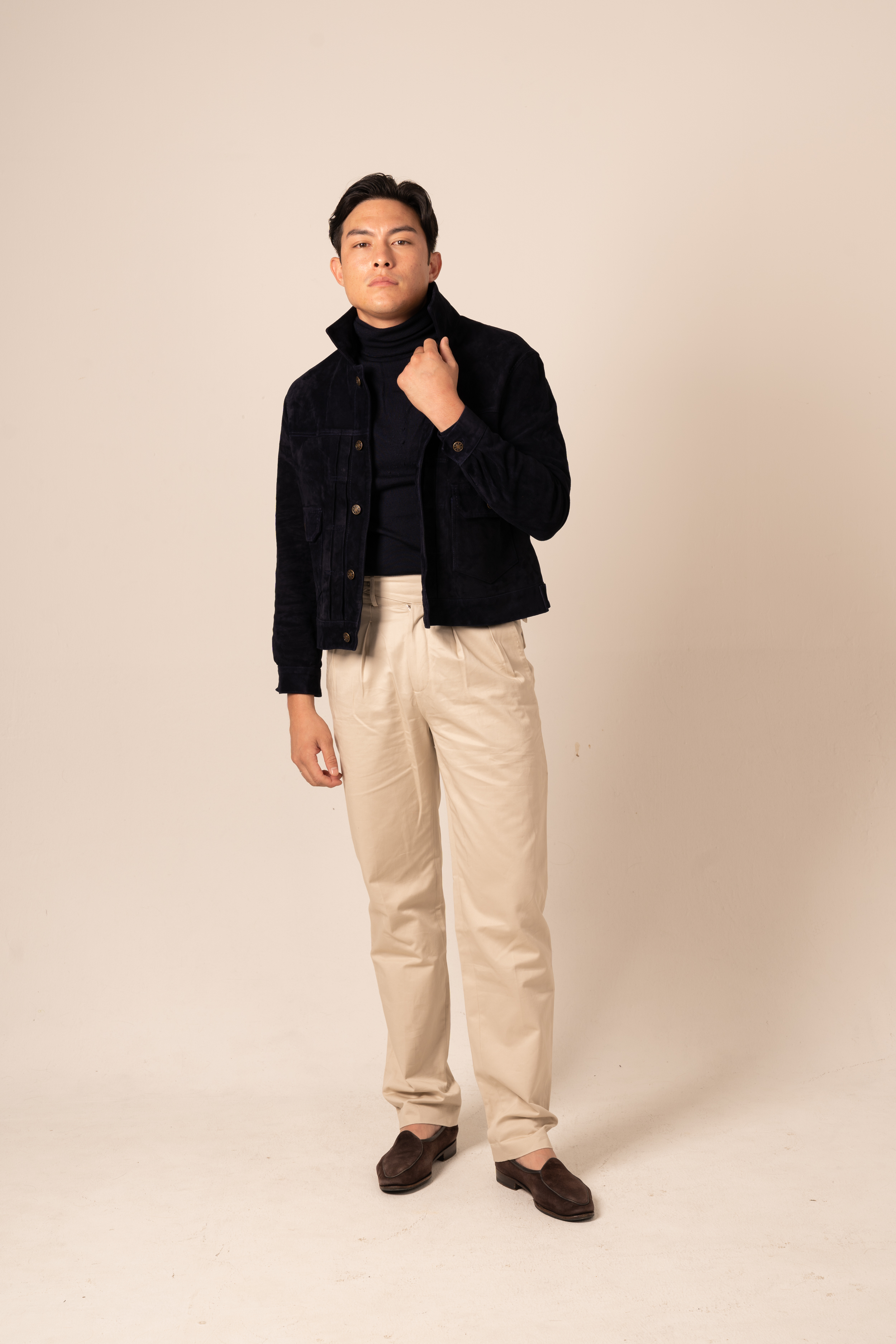 We certainly think our Presley suede trucker is one of our most underrated garments, as most of our customers tend to buy the A-1, A-2, or the Rakish/Hemingway models of safari jackets. But we love seeing our custom MTO truckers worn by those who do own it.  They have a different vibe, whether through its pleated fronts or the use of metal buttons (instead of zippers).  The Presley jacket is definitely #macho, but not overly boastful. It’s a modern version of masculine that is understated and easily wearable by anyone. 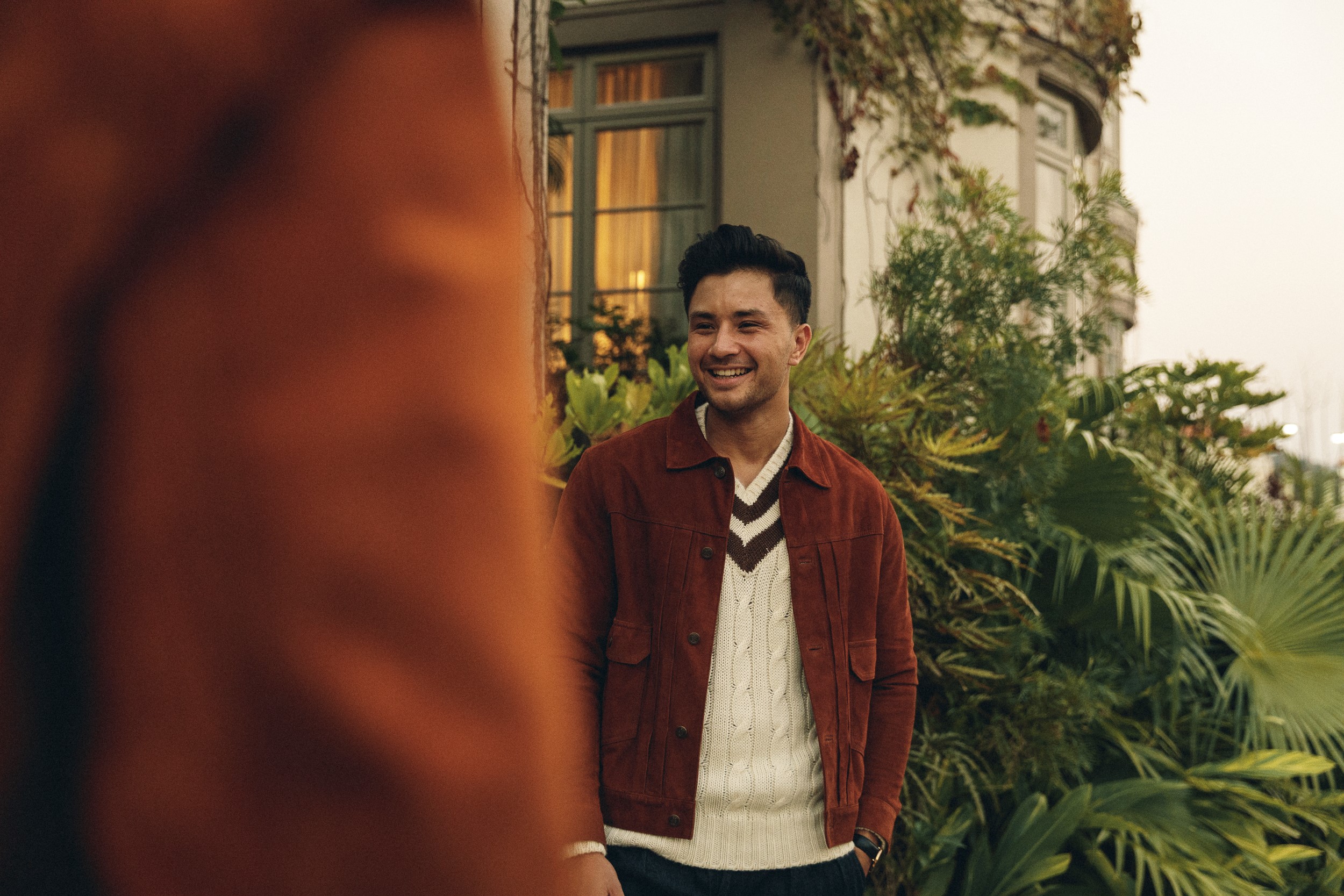 Like always, tobacco or polo suede are two of the best choices to go with since it’s quite literally the refined version of the traditional brown leather.  However, we do recognize the charm of blue denim, which is why we also recommend dark navy.  It provides a sleek, minimalistic tone that even seems a bit formal! If you can’t tell, we’re obsessed with putting rugged and refined together in all of our garments.  What can we say, we like breaking the rules. 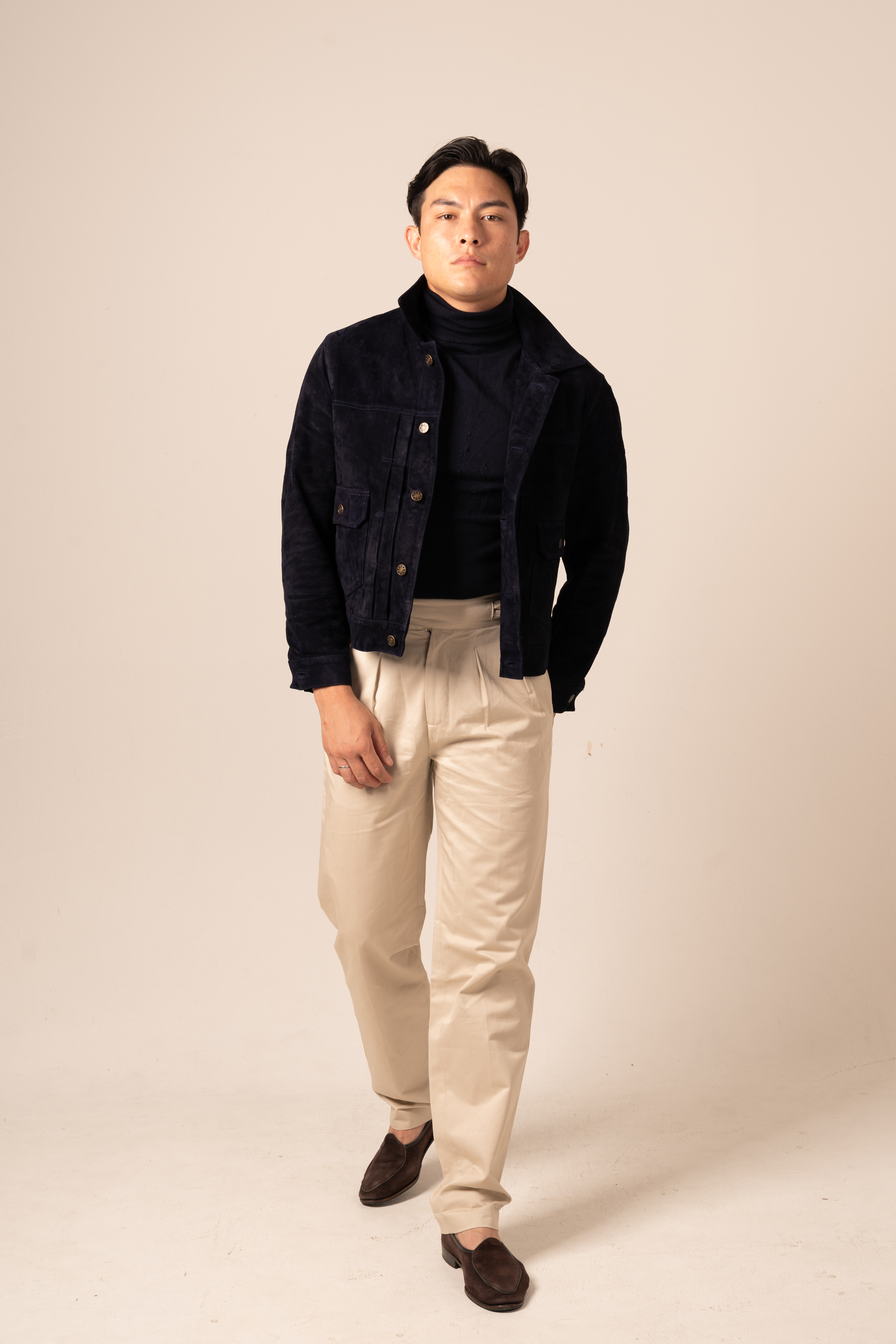 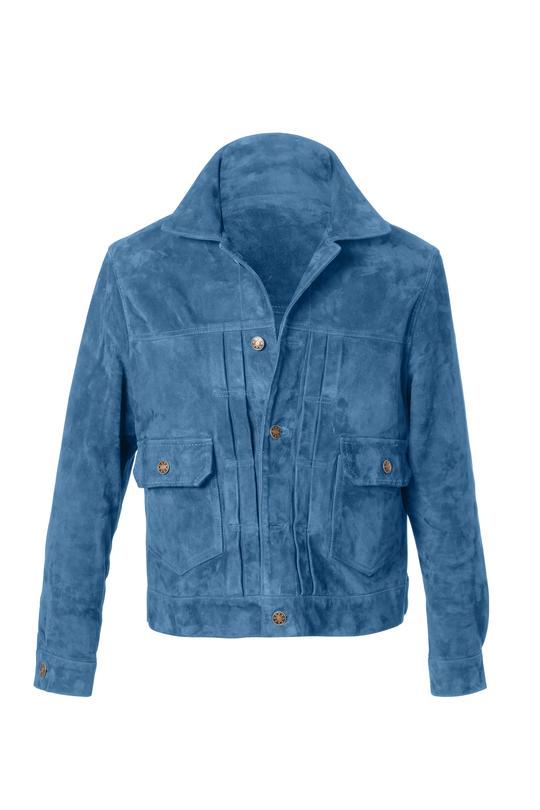 Maybe try light blue for those denim vibes, if you're bold enough!

So after you’re through being a flyboy or a huntsman with our the other Craftsman Products, why not get even more rugged with our Presley Suede trucker jacket? You don’t have to go full workwear- instead, bridge the gap between rakish and macho with our suede Presley trucker jacket.  The pleats and pockets provide character that even The King couldn’t resist.  You shouldn’t either. Just give in!