If you’ve been following us on social media, you’ll know that we like to feature a lot of people.  Not just guys who like to rock our products, but a whole manner of stylish gentlemen who we think look great all the time!  In this post, we’re going to highlight a few of them and see what kind of inspiration we can gleam off of them. After looking to the past for inspiration, it’s also nice to see what people are doing today! 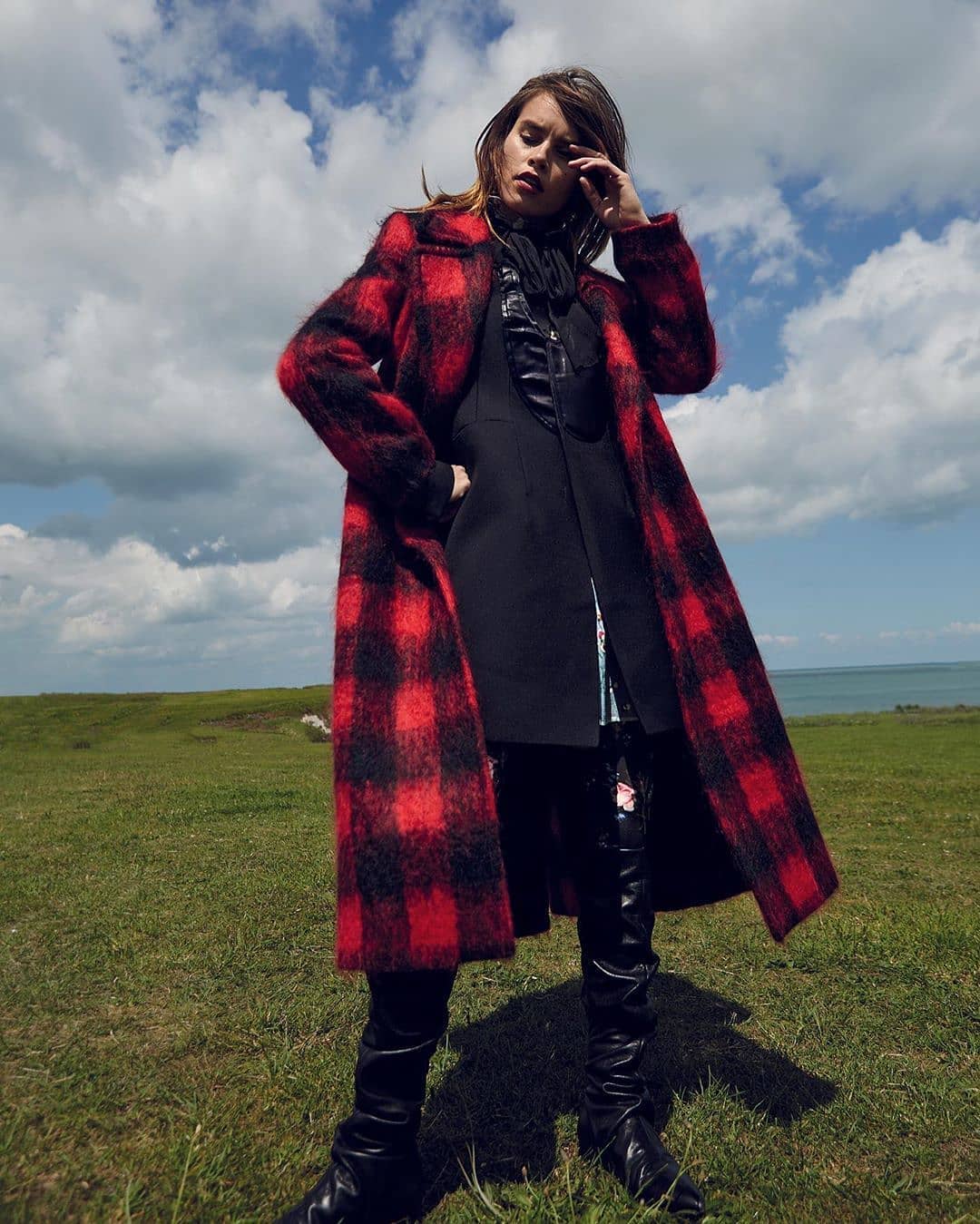 If you don’t know, Tagliatore is a storied Italian tailoring brand that produces great pieces for men and women. Even though this photograph is of a woman, it’s incredibly cool and striking, mostly because of the epic oversized buffalo check coat.  Like the coats we talked about in our 1920’s article, this one is long with a wide collar, making it different that the slim/cropped coats we saw in the 2010s. There's simply so much to grasp in this photograph that I had to include it in this post.


Buffalo plaid is also an interesting choice, as it’s a fun pattern that has been around for a long time. The red and black check could first be seen on heavy wool work jackets back in the 1920s then it was co-opted by the punk scene to be used on flannels; now it’s fun to see it used in a luxury, fashion aesthetic, yet juxtaposed against an all black (punk-esque?) look.   We certainly love rugged attire as well as a nice red jacket, so maybe we’ll have to explore buffalo plaid for ourselves here at Craftsman.. 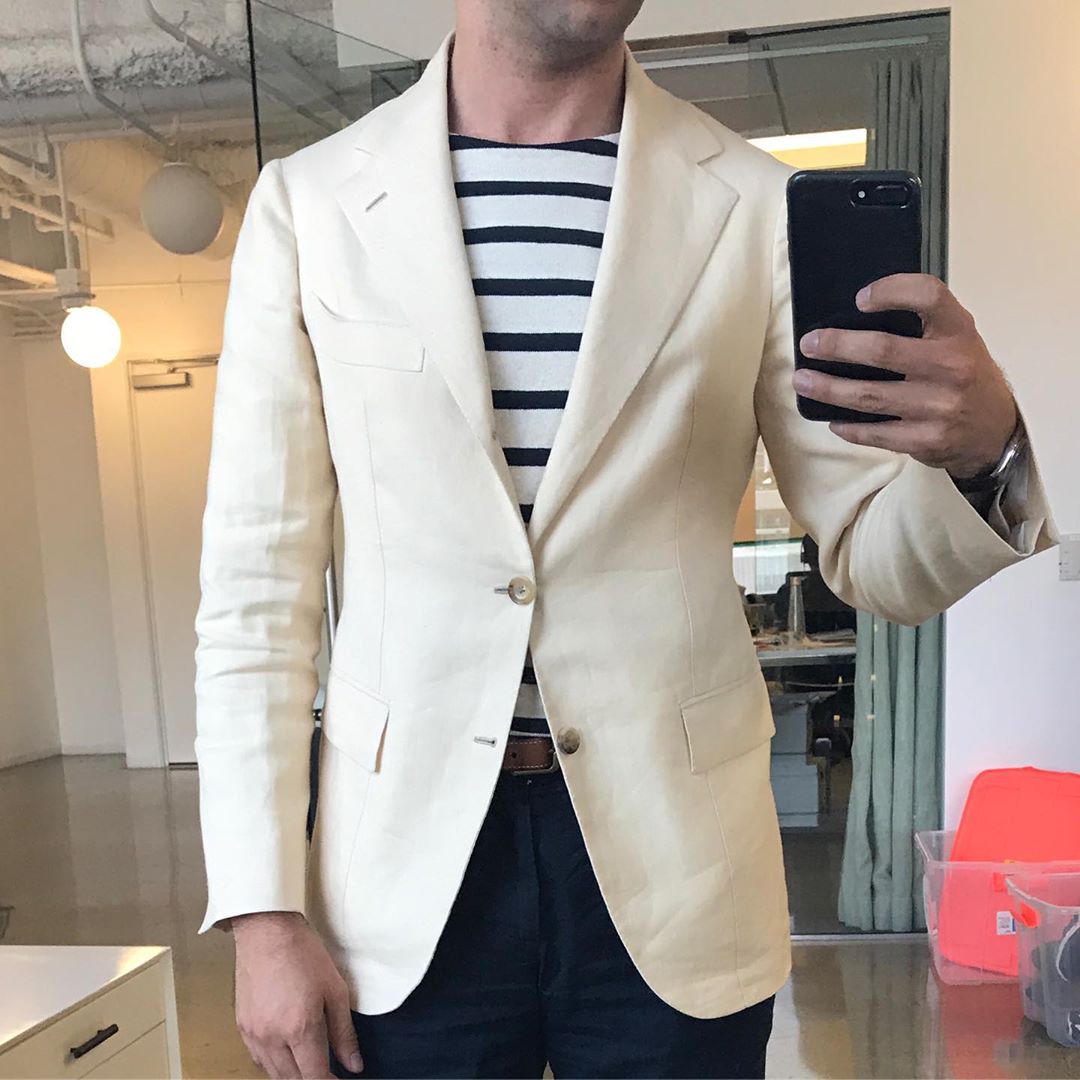 Paul is one of the most stylish guys around and it’s no wonder that he helps contribute to the Rake, a great publication, in his free time.  Just by going on his feed you can see a plethora of fantastic sartorial outfits, though he’s been known to dress down. He even rocks our A-1 and Rakish belted safari, both in the iconic tobacco suede.  If you’re not following him, you’re certainly missing out on some good sartorial FOMO.


The look that I enjoyed most was an interesting one, as he wears a breton stripe tee under a Sartoria Dalcuore linen jacket. It’s something incredibly casual and a bit rebellious, since to most people, a tee shirt and a tailored sportcoat are incongruous. But that’s only if you’re a corporate guy and we certainly aren’t! If you look at our own pictures, you know that we love wearing tee shirts; swapping a safari for a blazer is right up that alley.  It makes something that is a bit smart and has a small vacation vibe that shows you dress for yourself.


A tee under a sportcoat is so good and definitely appropriate for all you young gentleman out there who want to skirt the line between formal and casual. 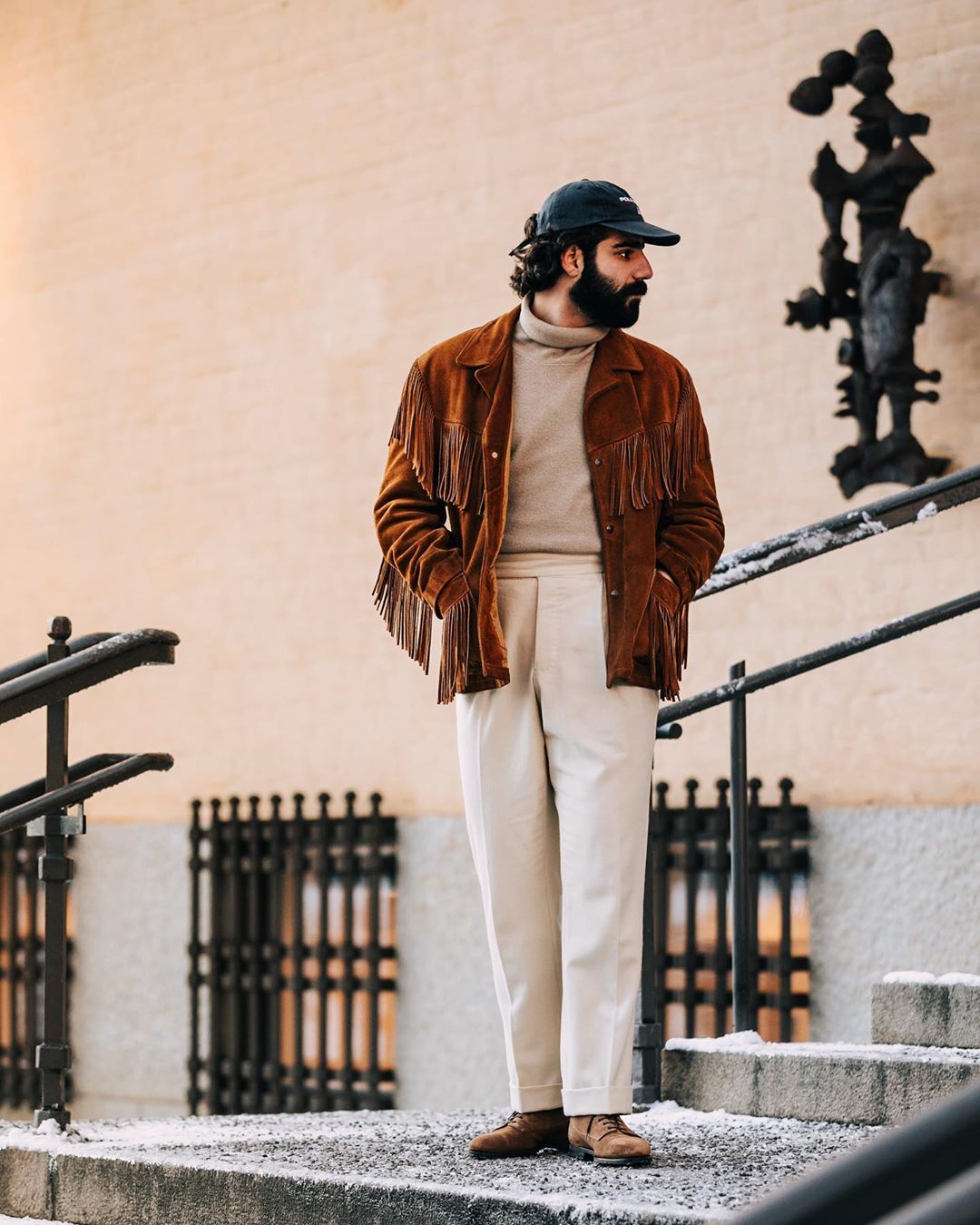 Milad Abedi is one of the best menswear photographers around and a stylish guy in his own right.  You’ve probably seen his work for Berg & Berg or for one of the various menswear publications that we all enjoy reading.  He’s a good mate of ours and has been seen rocking our safaris and gurkha trousers quite a few times!


The outfit I included from him is badass, unique, and clean all in one! Before we get into the pieces, just take a look at the color palette: the dark orange-brown hue of tobacco, the light brown, the cream, the slightly tan on the shoes, and the navy on top to anchor it down.  Minimal earth tones are always clean and provide a mature yet contemporary look. Then it’s up to the specific items to give the outfit some character.


A turtleneck and cream trousers are things you shouldn’t be a stranger to, but just look at the suede fringe jacket! It’s something that screams 1970’s chic, but it’s certainly removed from band tees and flared jeans here. The jacket is certainly unexpected, however it oddly looks at home with classic tailored pieces, providing a fun casual flare removed from annals of the seventies.  As fans of Americana outerwear, we may just have to produce one for our own offerings..


We also love the use of a ballcap to give it some extra casual flare. 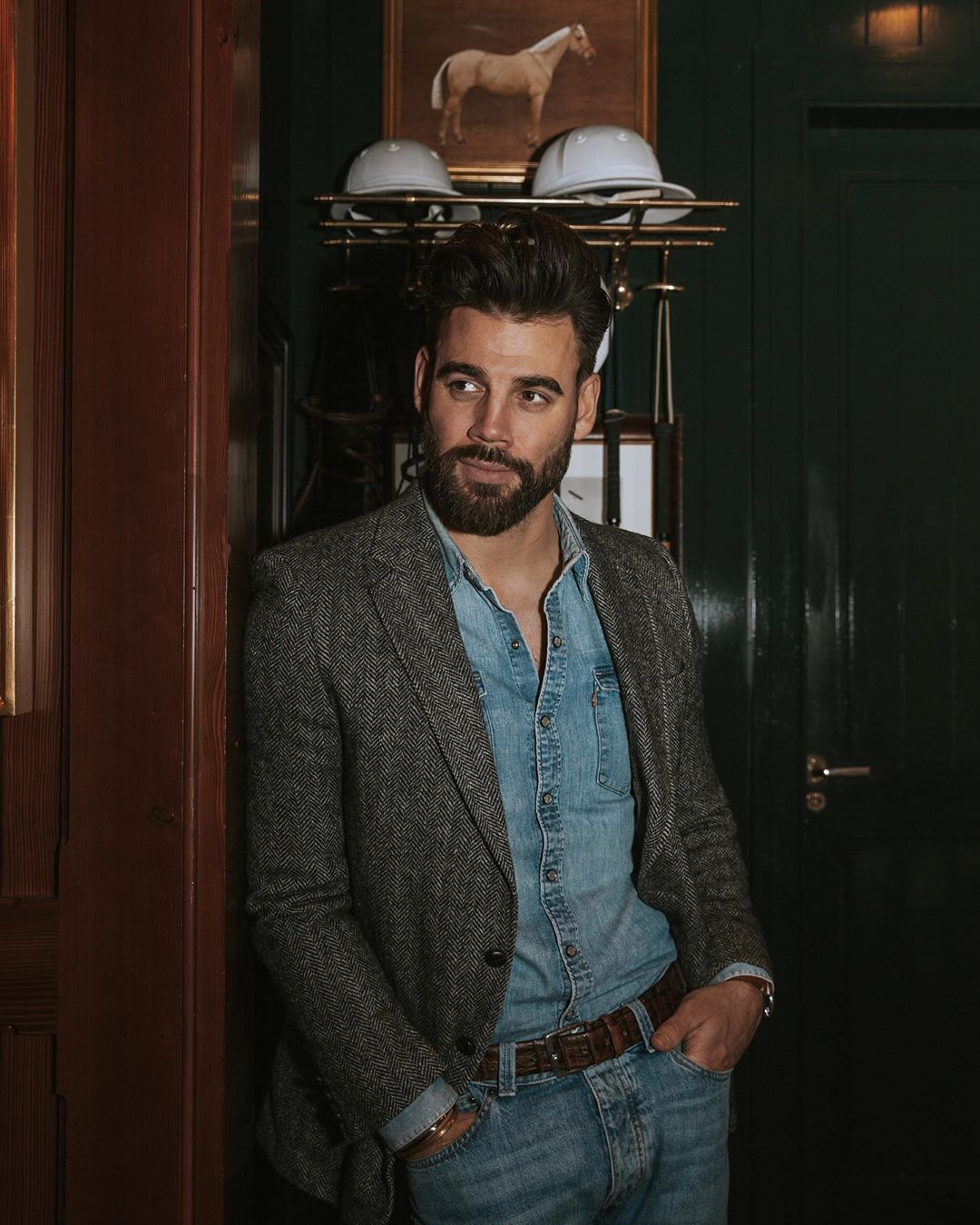 After watching the Ralph Lauren documentary, I’ve been feeling in an Americana mood. And it’s clear that Timothy James has been on that same vibe, taking inspiration directly from the best American designer of all time.  Nothing says that look more than Ralph’s signature pairing of a denim shirt and a tweed jacket, and that’s what Timothy does here.


It certainly is a bit different, with a softer tweed rather than Ralph’s typical broad shoulder look, but it’s still nice and gets the point across.  He also uses a thinner belt instead of the big cowboy ones that RL is known for. Overall, it’s a great interpretation that certainly works as inspiration for us and is in the same vein as Paul, in that it allows us to wear a sportcoat casually without any ties to typical formal attire. Of course a killer beard probably helps too! 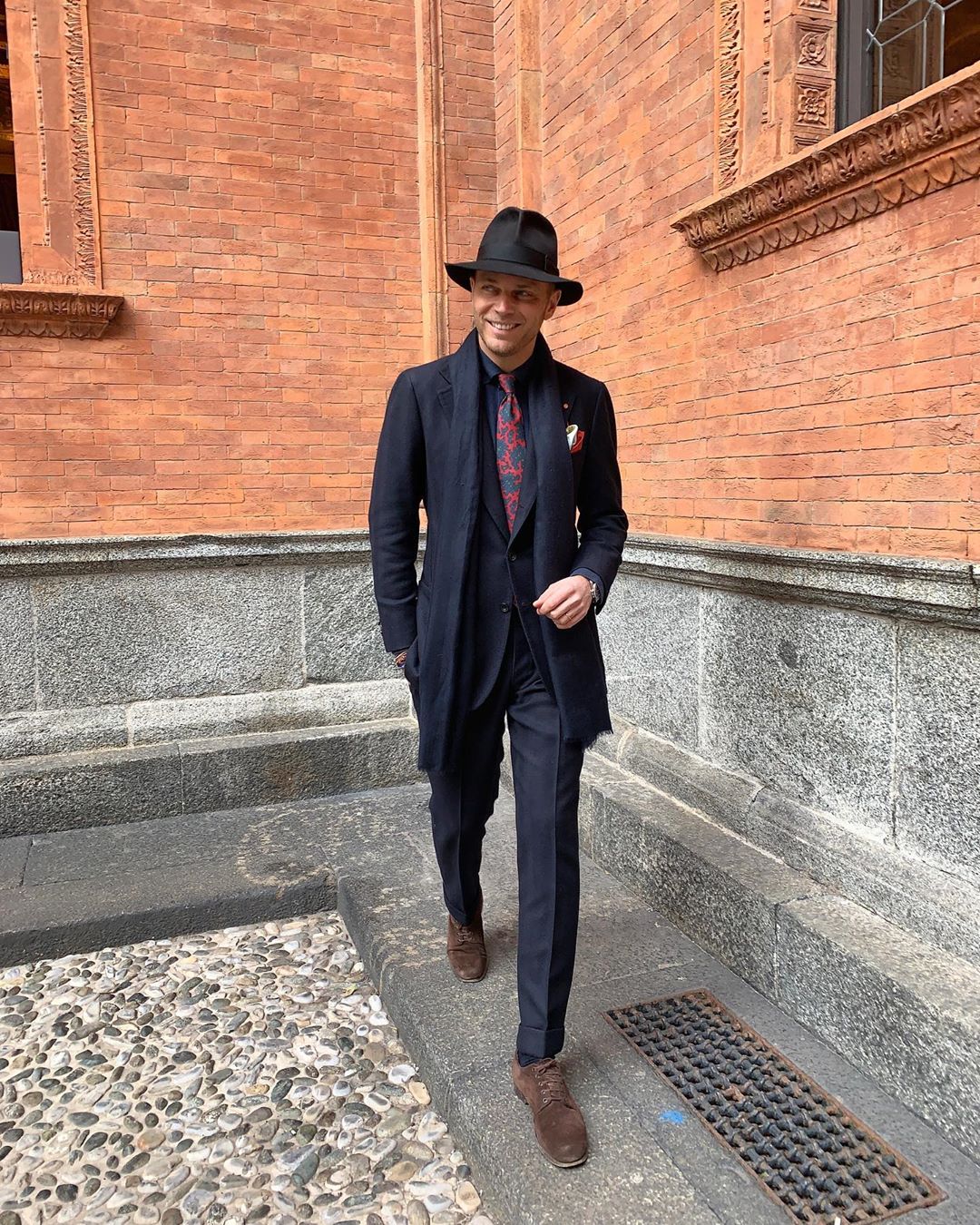 Luca Rubinacci needs no introduction.  As heir to the Rubinacci brand, you have no doubt seen him everywhere, from his great IG posts to being streetstyled year after year at Pitti.  We also love how he democratizes menswear with his frequent videos that are always a hit with people around the world.


It appears he might have read our article on vintage inspiration, as he certainly has that vibe in this outfit.  The wide brimmed fedora and long coat definitely harken to the Prohibition Era of the 1920s, but it doesn’t appear costume-y in the slightest. In fact, he looks right at home with the look, smiling like he always does.


Minimalism and monochromatic looks are certainly a theme across many of our inspirations and Luca takes a ride on the dark side by opting for a dark suit, coat, hat, and scarf.  With the darkness surrounding the bold red paisley tie, it’s almost a reverse of the Tagliatore look that put red on top of a black ensemble. We typically like wearing monochromatic earth tones, but with all this great inspo, we may just have to get a bit punk with it for 2020. 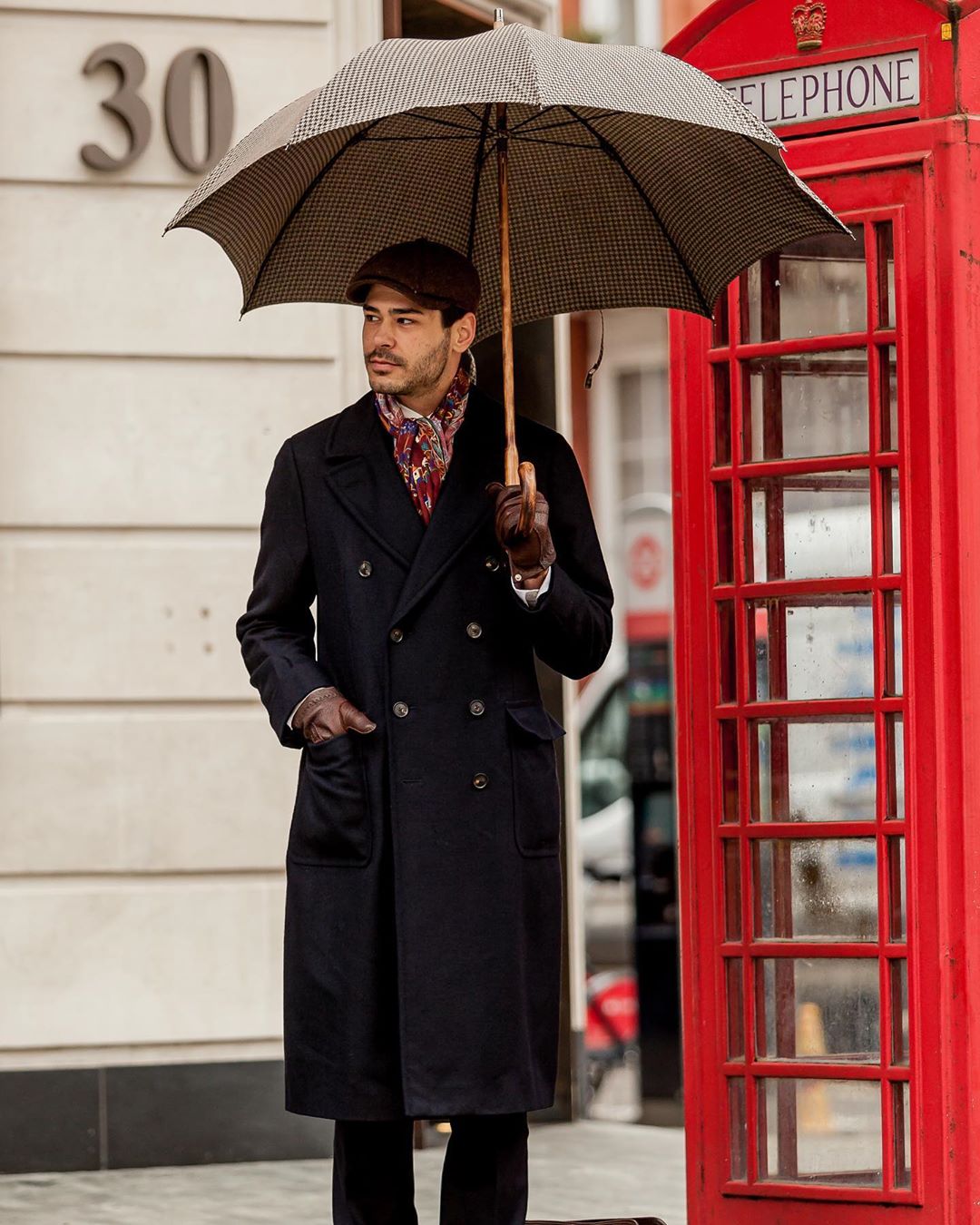 Gabriel Cohen features a look that takes after what we loved from Tagliatore and Luca Rubinacci: a big dramatic coat.  Unlike the single breasted variations of the previous two, Gabriel instead opts for a double breasted polo coat yet still maintains the dark color. We’re unable to see if he’s in a suit or separates underneath, but we at least know that his trousers are also dark!


A polo coat with its double breasted closure, wide lapels, and patch-flap pockets has an inherent vintage style to it already, and Gabriel leans into it by wearing a newsboy cap.  He also accessories it with dark brown gloves and a checked umbrella, turning it into a very elegant ensemble. As you can see, vintage style inspiration doesn’t always have to look costumey.


I also love the use of a fun patterned scarf to break away from the monochromatic look.  It’s very similar to Luca’s bold paisley tie, except the scarf is much more functional and has more of a rakish vibe to it that we can certainly try in our own outfits.  We’re probably gonna be wearing fun scarves and dark coats (or rather, safaris or shearlings) as much as we can here in 2020. 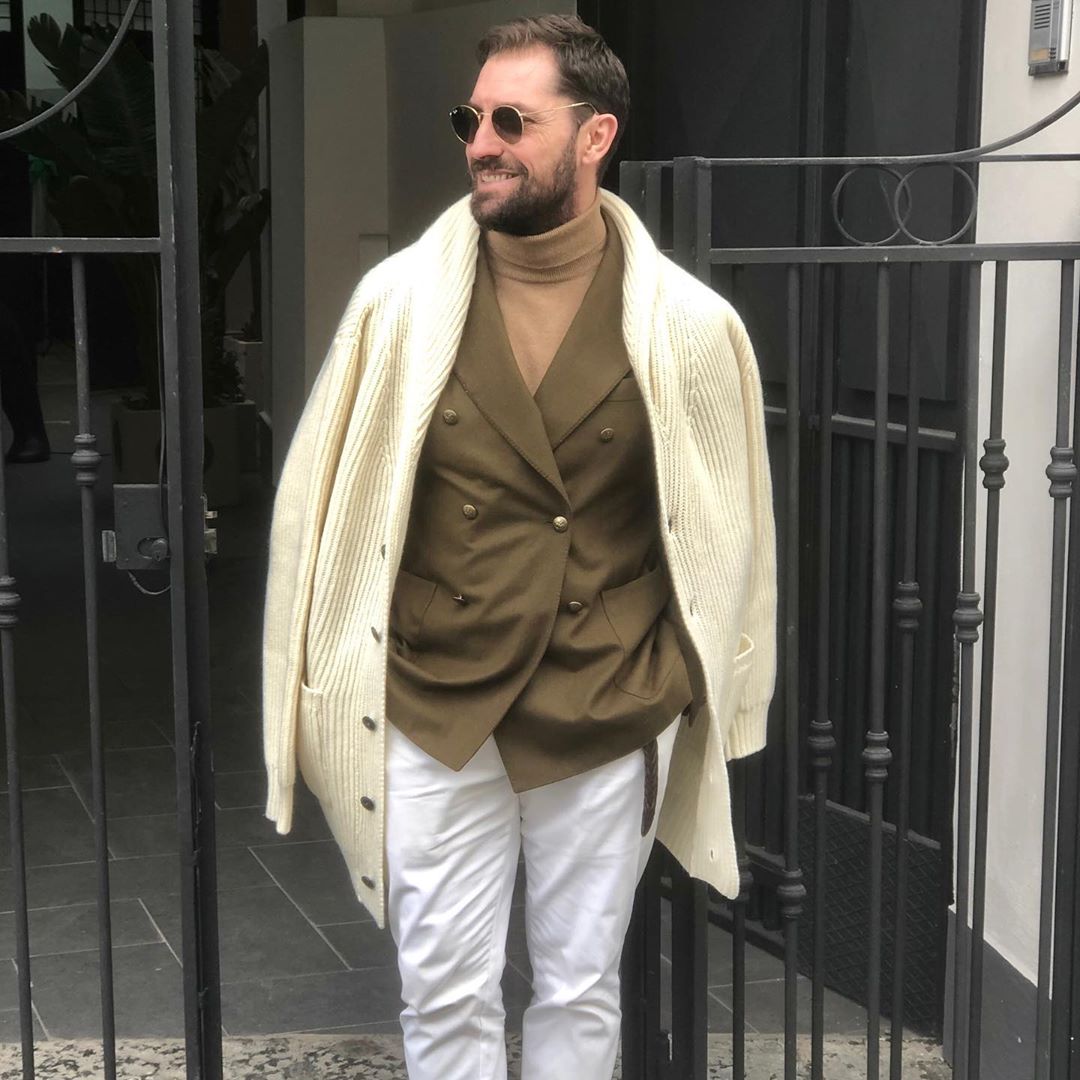 We finish off with a look from Falco Boutique Caivano, an independent menswear store in the North of Naples. The IG account is filled with great inspiration, pulling together different pieces that are sold in his store. Some are rather understated while others are bold and provide innovative ways of doing classic menswear.


The outfit we highlight here is no exception. At first glance it’s a nice, yet typical look, utilizing a turtleneck under a DB along with some cream trousers.  It’s in the same vein as some of the other looks, as we love wearing turtlenecks for minimalism and earth tones are easy to pull off in an elegant way. However the true, unexpected star is the oversized cream cardigan.


We’ve seen guys wear big overcoats (we’re looking at you Peaky Blinder stans), but cardigans? That’s an inspired move! It really is a simple shawl collar cardigan in a cream wool that’s just done in a bigger size.   It’s probably just as warm as an overcoat, but with the added bonus of being much more cozy and soft (especially since overcoats are traditionally structured and more formal). Wearing it draped over the shoulders adds to the louche nature of the outfit and is a little unexpected, but you know that we like that. It’s not exactly appropriate for lawyers or finance guys, but if you’re one of the growing demographics of creative entrepreneurs, then breaking out this move might be for you!


I hoped you all liked this little feature of stylish people that inspire us. It doesn’t always have to be recaps about the past or deep dives into our products; we like being personal and sharing what gets us excited with you guys! Leave a comment below which one was your favorite and if you’d ever do the moves that we’ve shown here.


I know I will be taking these cues and adding it to my style arsenal.