Today we’re discussing a seasonal take on one of our most popular items using a cloth that is currently trending in menswear: corduroy. 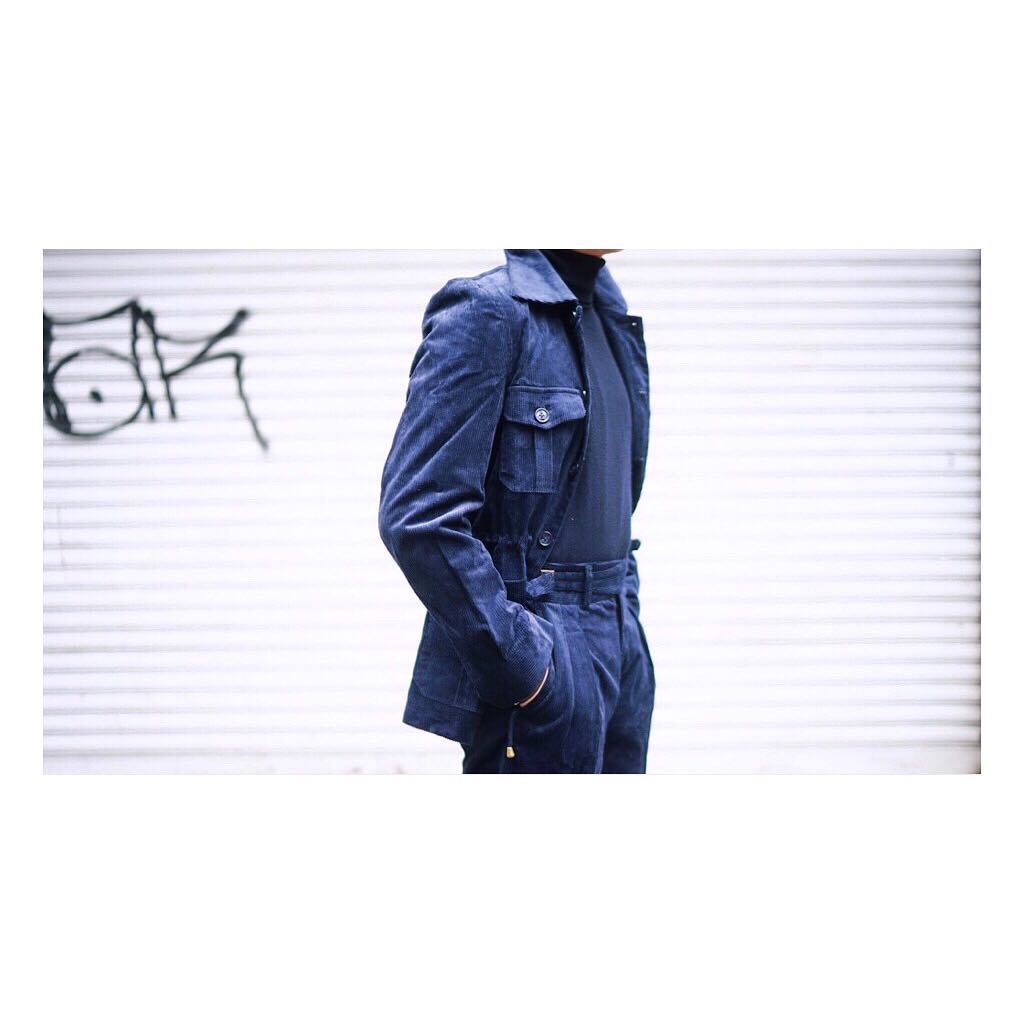 After our extensive blog post on the safari jacket, you should no doubt be familiar with the piece.  If not, here’s a brief run down: it used to be a British military shirt-jacket that soon was adopted in casual wear in the 1940s.  It reached its peak in the late 1960s and 1970s, where it came back into the lexicon of men’s style and even helped inspire leisure jackets and disco attire.  However, it’s seen a bit of a revival today where it’s wide collar, functional patch pockets, and rakish belt have been seen everywhere from your local menswear influencer to some of the big boys at Pitti.


One of the reasons behind this revival is the ability of customization, which has helped bring the Safari out of it’s khaki drill (or polyester) history.  It’s the forefront of our philosophy and why we created our company. And ever since our founding, custom made Safari Jackets have been extremely popular, not just for the fit, but because we’ve provided them in linen and suede, both in numerous colorways.  It was a great way to breathe updated life into a classic garment!


Suddenly, safari jackets were full of character and men around the world could capitalize on that. They could get the louche suede Rakish jacket or the olive linen as a nod to militaria.  No longer would they have to hunt vintage (of which colorways are rare) or find a designer one; we had proved the much needed customization. But we’re not stopping there. 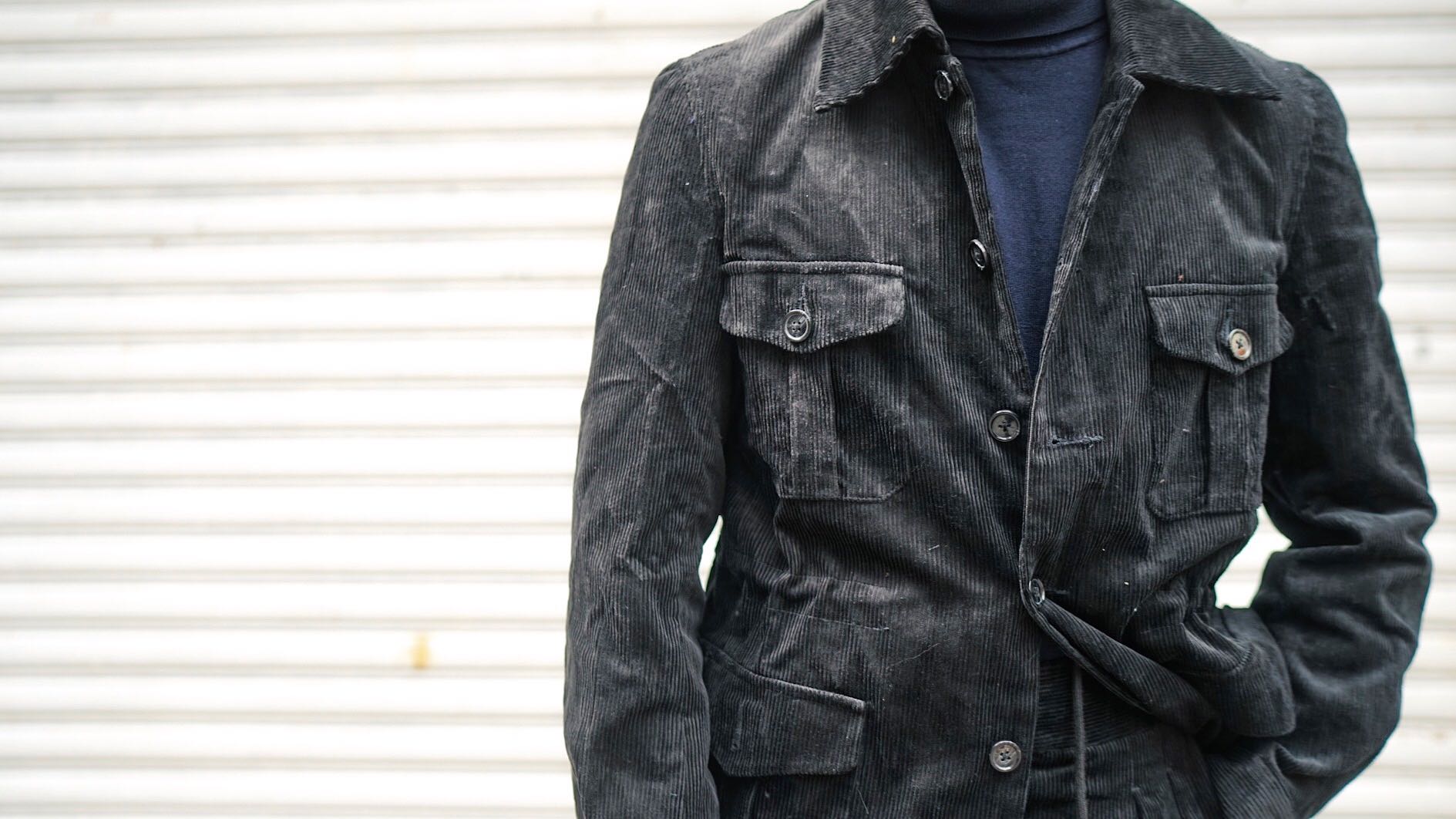 One of our recent projects was bringing in corduroy as a cloth for our safaris. It’s a bit of an odd choice for some, but one that fits right in classic menswear. Corduroy is 100% cotton and has a brushed texture that is added to by its wide wales. It has roots in workwear but was soon adopted by the ivy crowd as a hearty alternative to chinos that wasn’t as warm as flannel or tweed! It's meant for shoulder weather, but depending on your individual client, it may even be able to be worn for three seasons!

All of these qualities have resulted in the cloth being a popular choice among the menswear crowds, especially when it's done in a fun color, as a way to break it from its traditional background. And that’s what makes it perfect for our safaris! 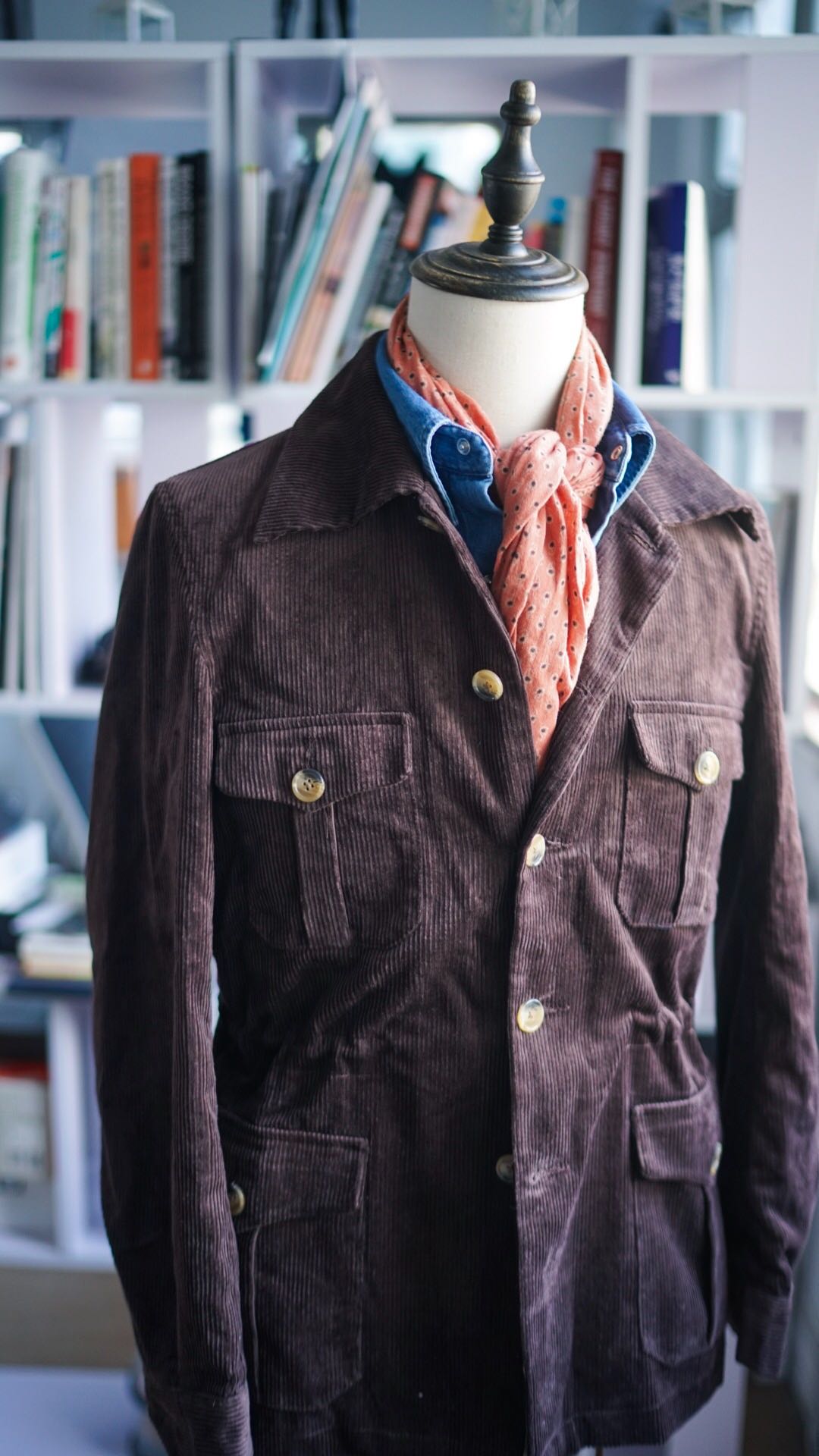 
We’ve picked a few different colors that we believe bring out the best of corduroy.  Almost all of them are dark, from the coffee and navy to the epic noir. Don’t think of dark as being formal though; the brushed, waled cord gives them a dusty appearance, making them look just as cool and casual as a well loved suede jacket.  And then we have the cornflower blue which features a vibrant shade that the cord does so well. It’s a bit on the heavier side, but that's how you know it'll be sturdy and will break in softly over repeated wears. 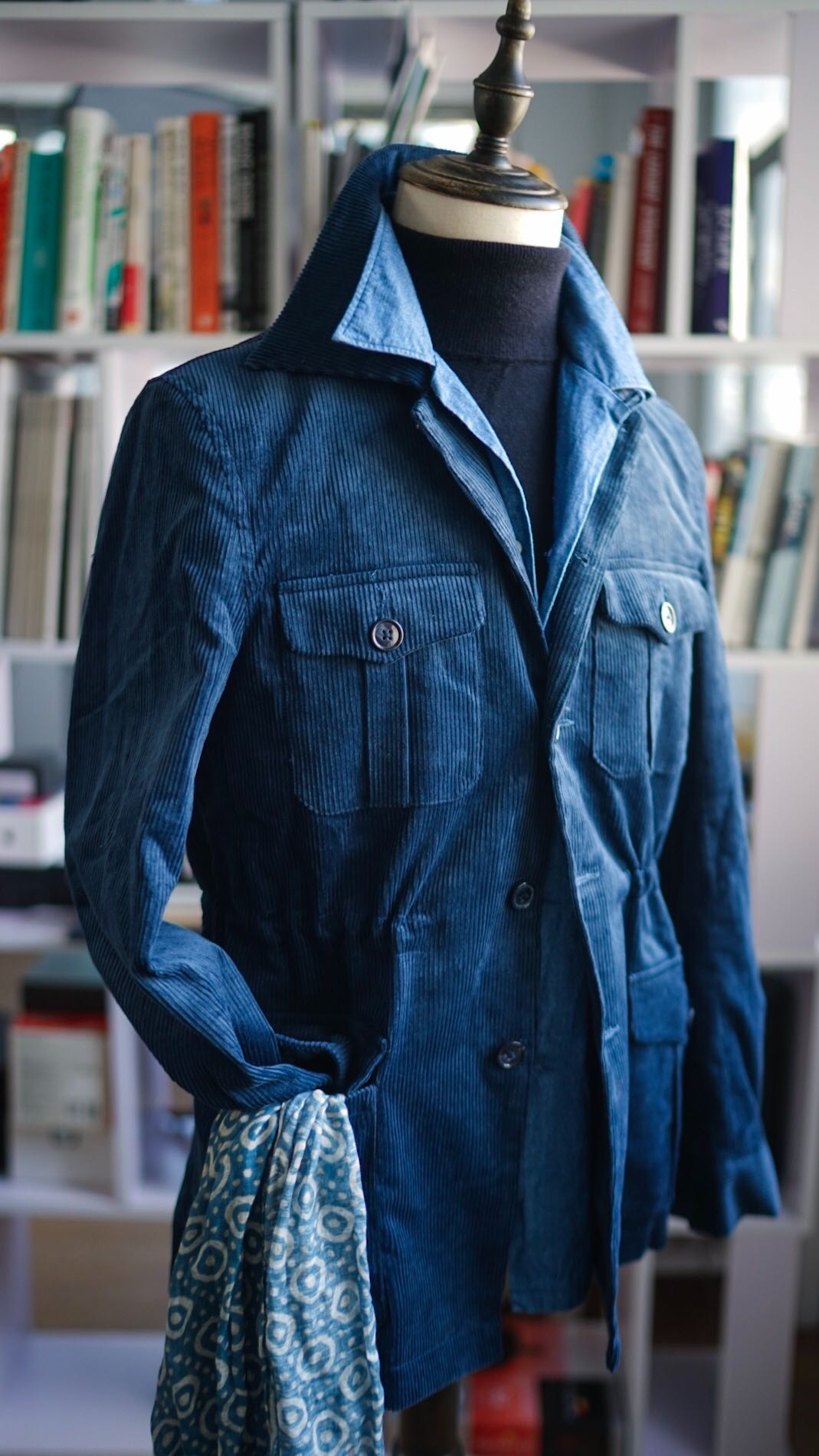 In any case, it’s a great way to stand out. Corduroy, especially in these colors, are a bit unexpected and subversive but it’s an important quality to have when developing personal style. It helps that our cord safari model is slightly different than the ones we currently offer for MTO.  It’s still made up in our Hemingway model, but you’ll mainly note that the collar is wider and dramatic (as a nod to vintage style), which is fitting for this great cloth.  A new decade means it's time to put a fun spin on the classic menswear piece. 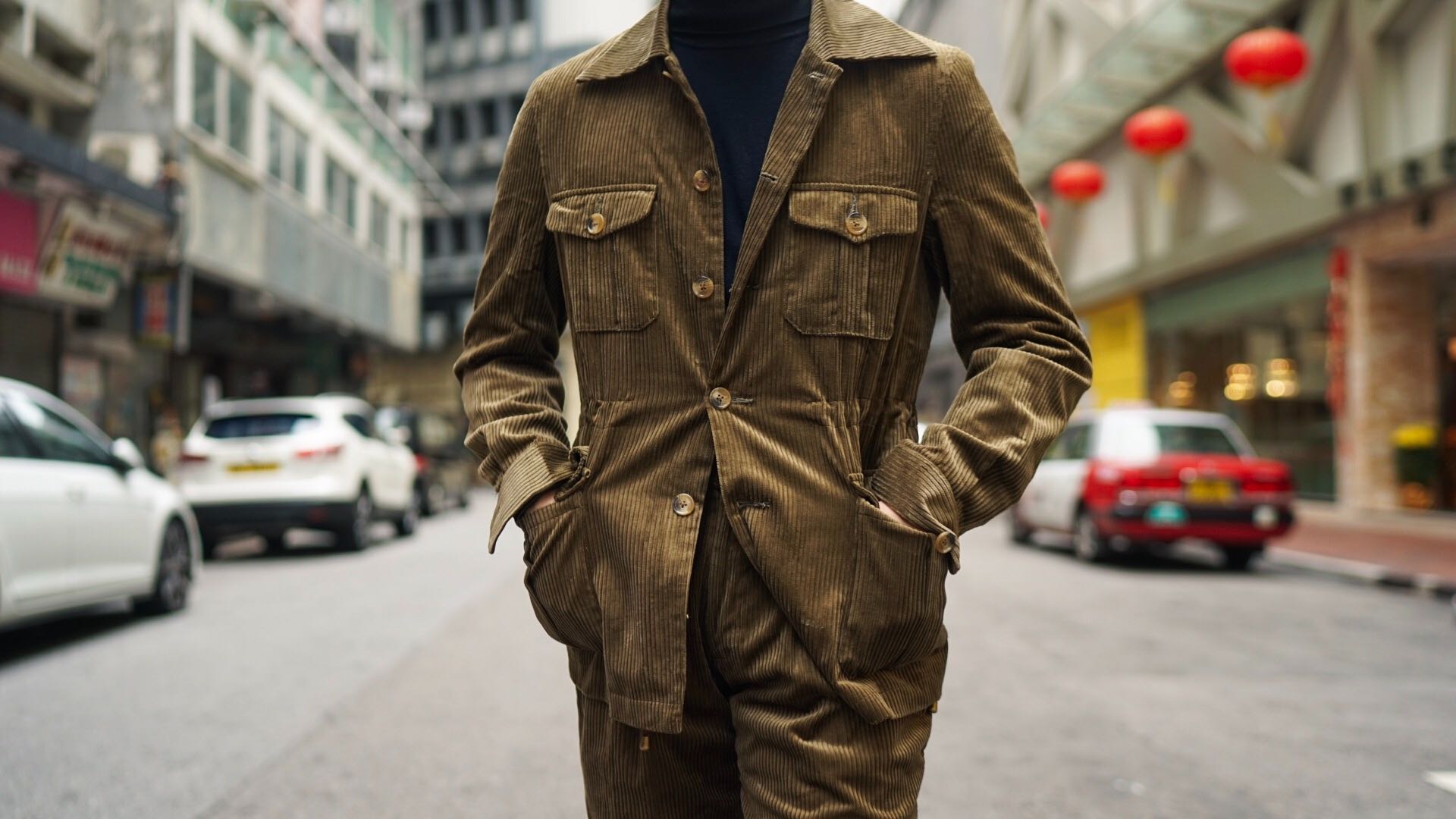 Break the mold, be an individual,  and grab one of our RTW cord safaris today! It has a such a distinct character that provides a different vibe than the suede or linen ones we're famous for.  And as you can see, a corduroy safari jacket is just as smart and rakish as any of them.

Don't forget email us for custom options, as well as the opportunity to get a full cord suit with matching corduroy gurkhas like the pictures suggest.  We're also going to be stocking some great new gurkhas in new cloths, so stay tuned... 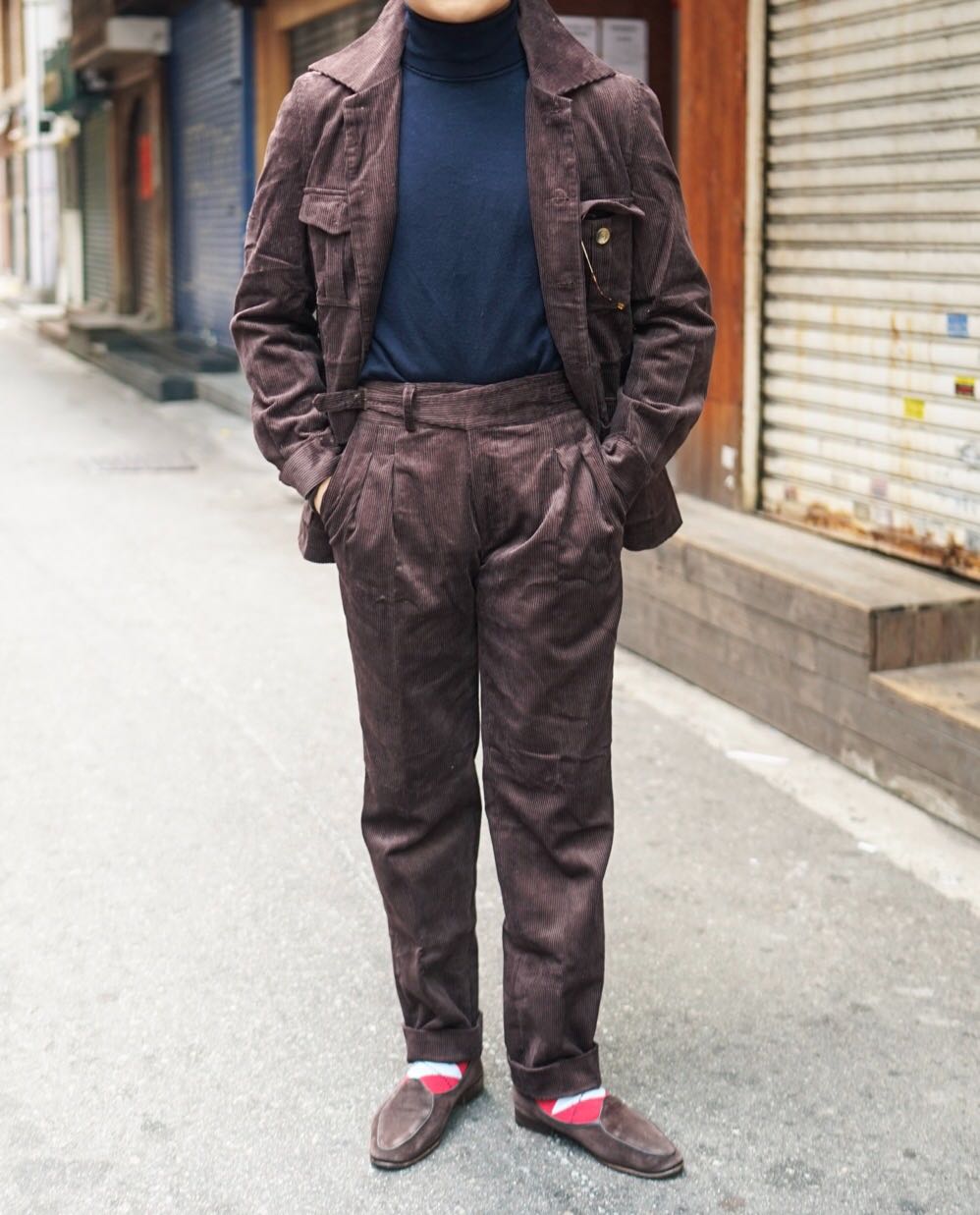