Many writers and bloggers out there have decried their love of the safari jacket.  It’s hard not to agree with them, because it really is a versatile garment, with its roots in both vintage militaria and casual wear for decades.  Because it’s such an essential part of our DNA (rivaled only by our fetish for gurkha trousers), we thought we’d do a deep dive onto this indispensable piece of outerwear. 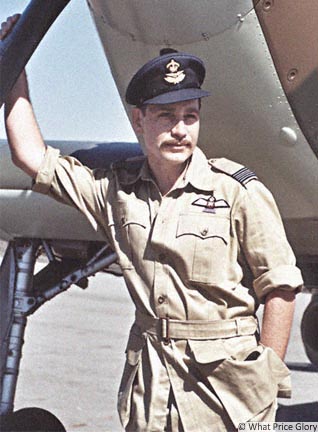 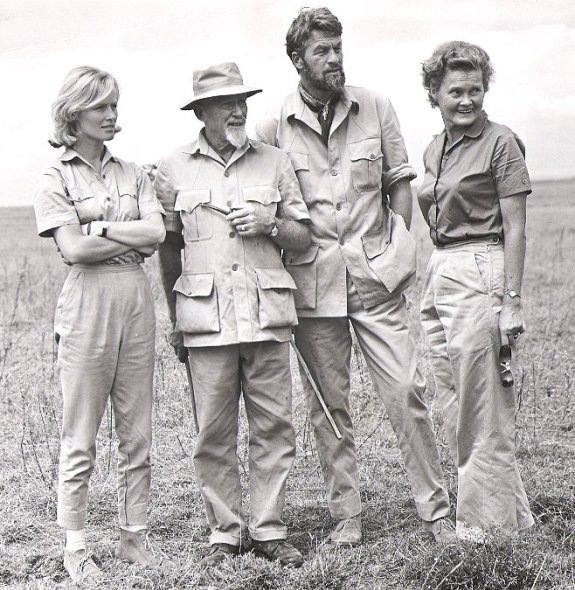 As many of you already know, the safari jacket comes from old British army uniforms.  You can probably picture it now: a mustachoed man clad in khaki wearing a pith helmet, boots, and a khaki garment with epaulets, lapels, four patch pockets (with flaps no less), and belt.  It certainly is a striking appearance, being a perfect meld of masculine style and over utilitarianism. Pockets were meant for ammo, cigars, or game pieces. The lapels meant to be buttoned up if it ever got cold. And the belt was meant to give yourself at least a bit of a figure, as this military piece was mass produced after all.   It was definitely something worn by a man's man, from on-screen heroes like Clark Gable to a real life, hard-boiled gentleman like Ernest Hemmingway.  It was almost like you could get a piece of their life through this jacket. 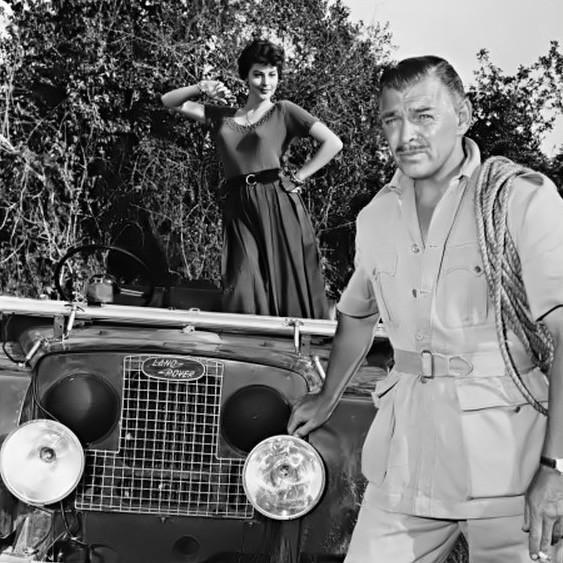 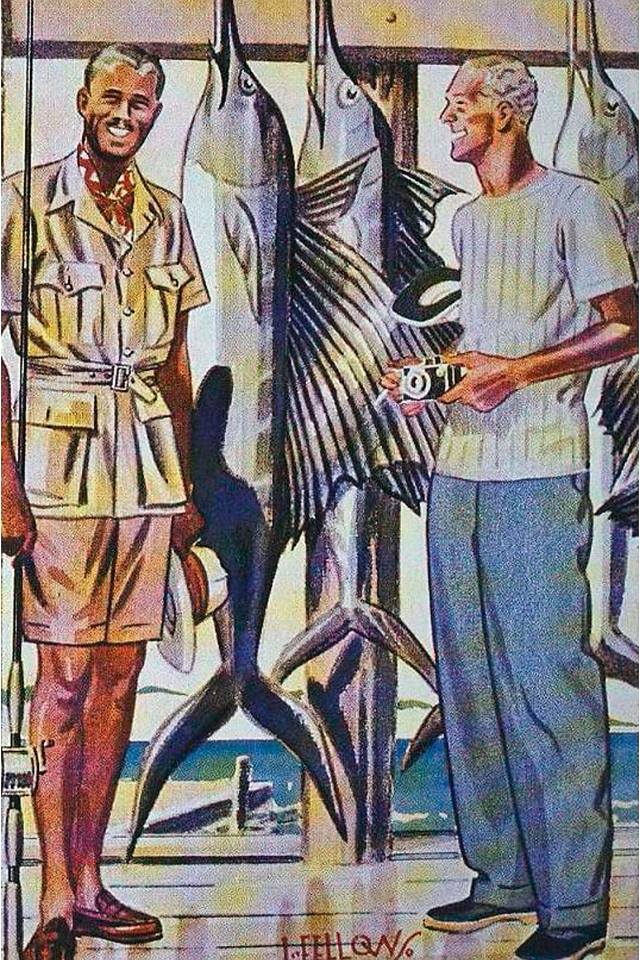 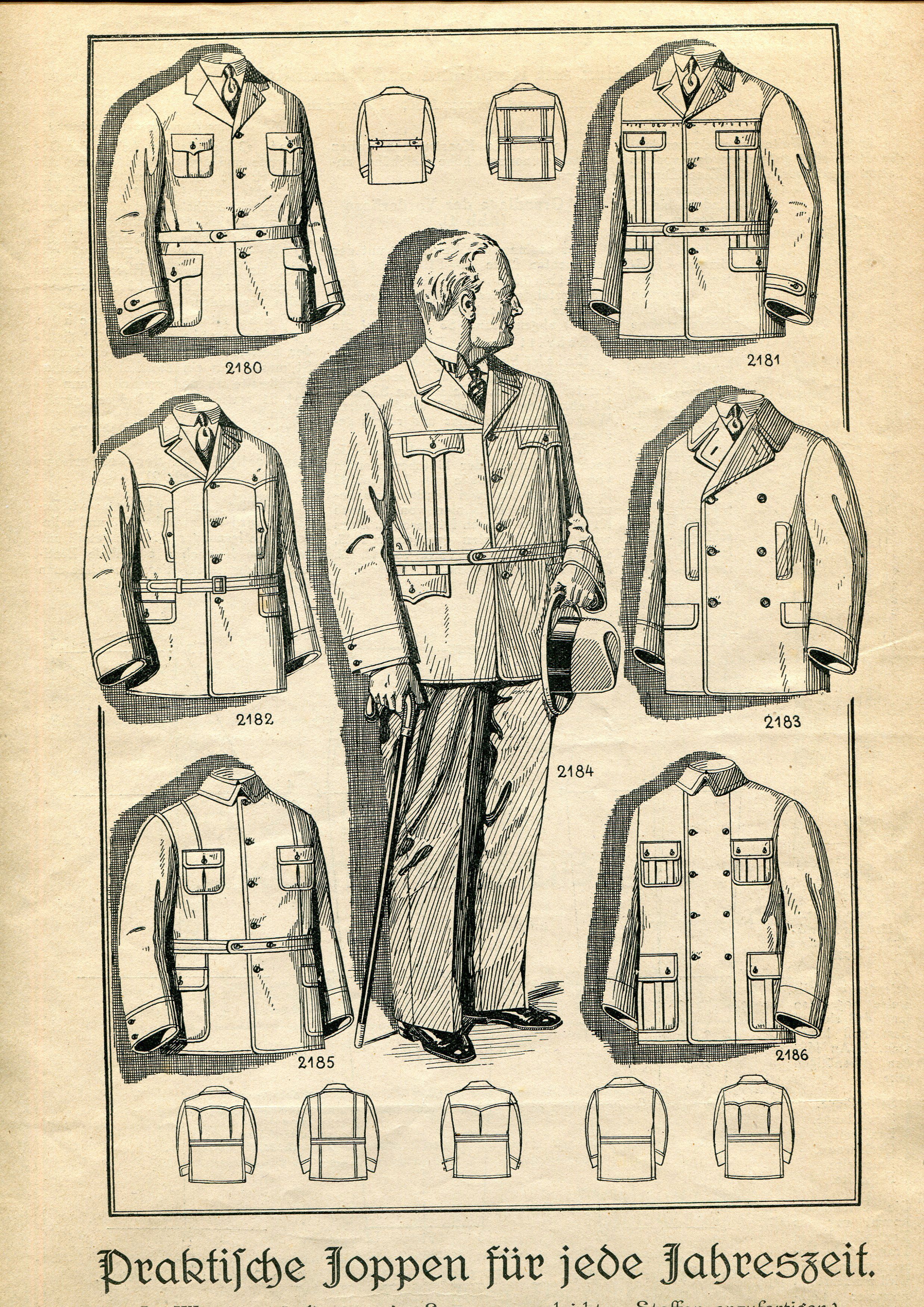 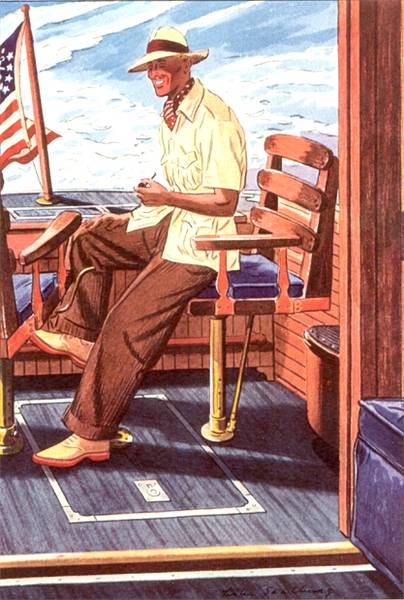 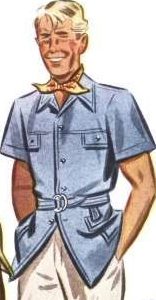 It eventually found its way to civilian use, being a popular sportcoat replacement for many discerning gentlemen.  The belt and utilitarian style wasn’t too odd for the period, as it echoed sports jackets that came before. At a time where American casual wear was still in its infancy, the safari jacket paved the way for a more dressed-down approach to jacketing. It was later cast aside in the next subsequent decades in favor of denim and leather jackets (which we also love) until a brief stint in the 1970s.  Some men opted for straight Sahara vibes like the sophisticated Yves Saint Laurent while others took the design as the basis for their disco ready leisure suits, ready to take the clubs by force.  Even Roger Moore's Bond gave it a go, showing us that MI6 agents could pull off this rakish piece.  Then it disappeared again, until the Classic Menswear Renaissance brought it back! 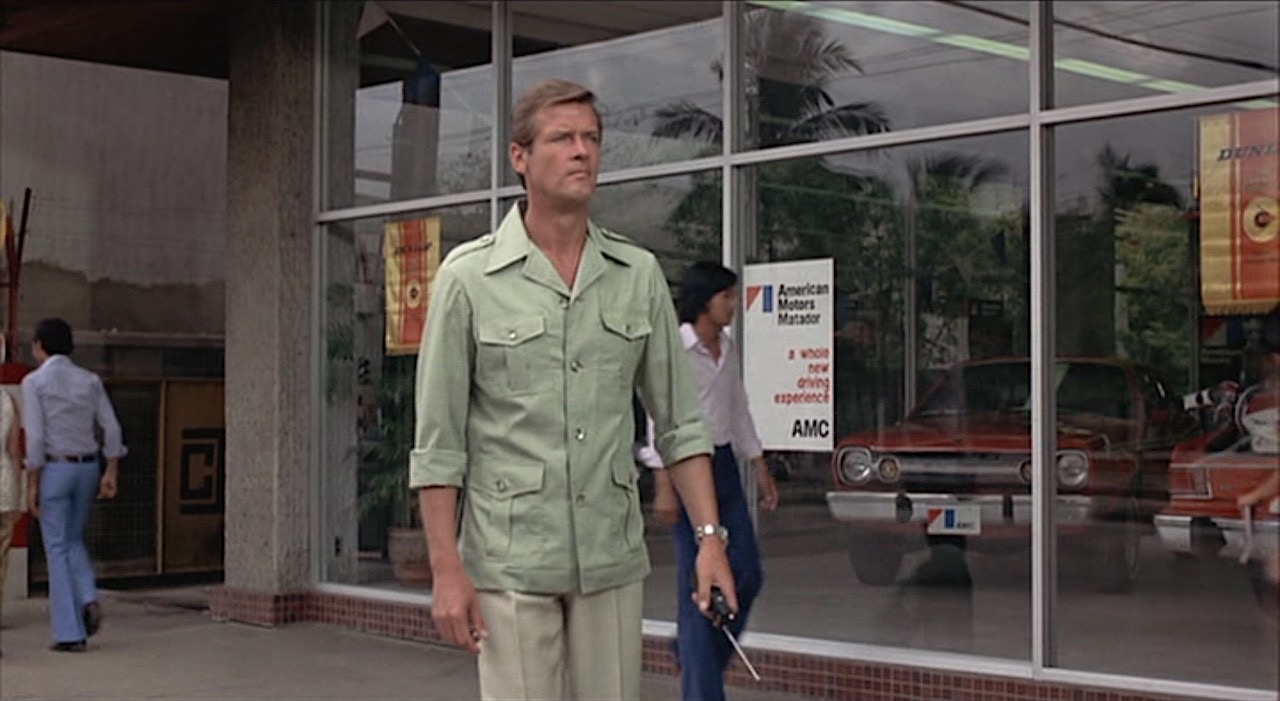 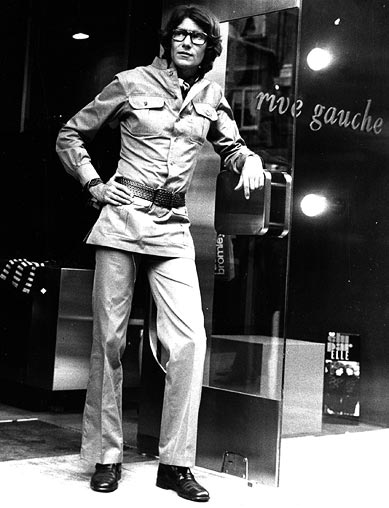 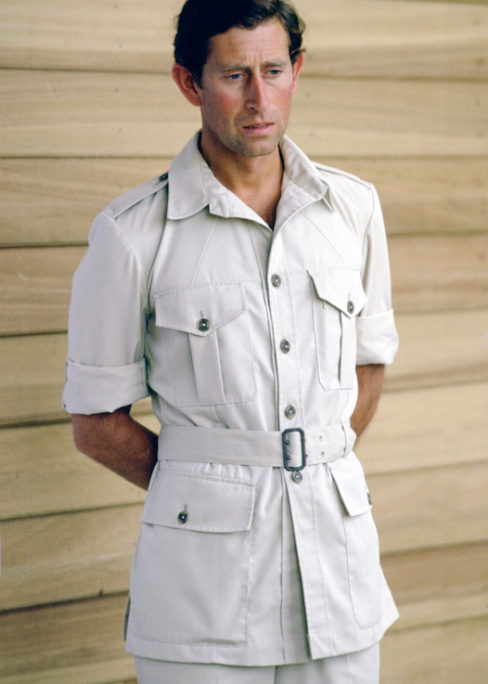 More utilitarian than a sportcoat and more dressy than a french chore coat, the safari jacket really has captured the minds of menswear enthusiasts everywhere.  It’s returned at a great time where it’s appropriate to break the rules a bit and have some fun with style! It’s completely versatile, being a great match for tailored trousers, gurkha chinos, and even jeans which makes it perfect for the businessman on his day off or a young entrepreneur searching for his place n the world. 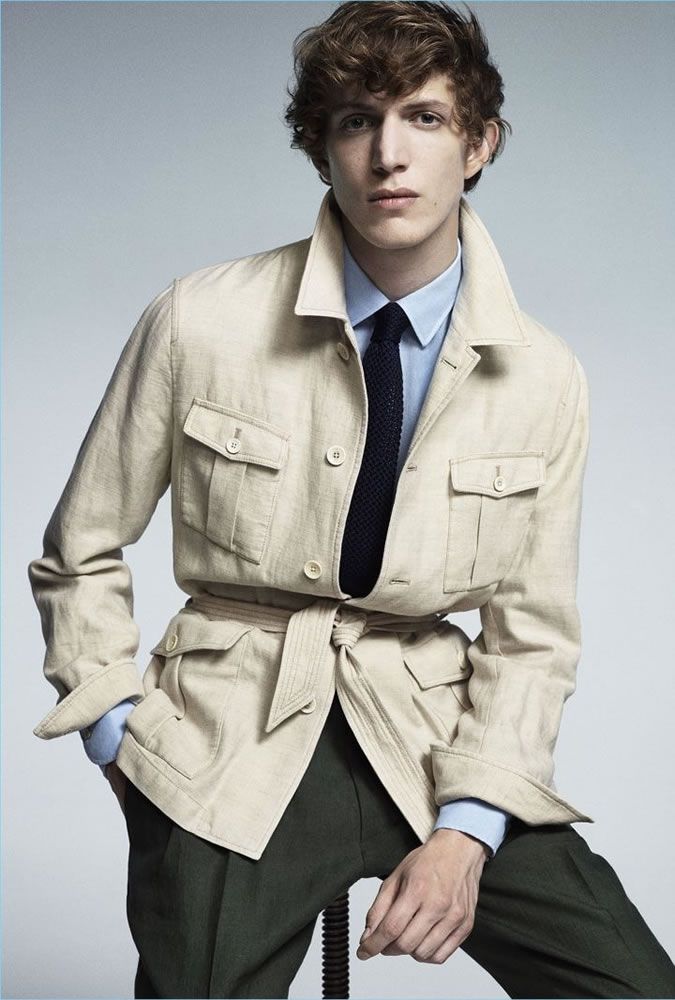 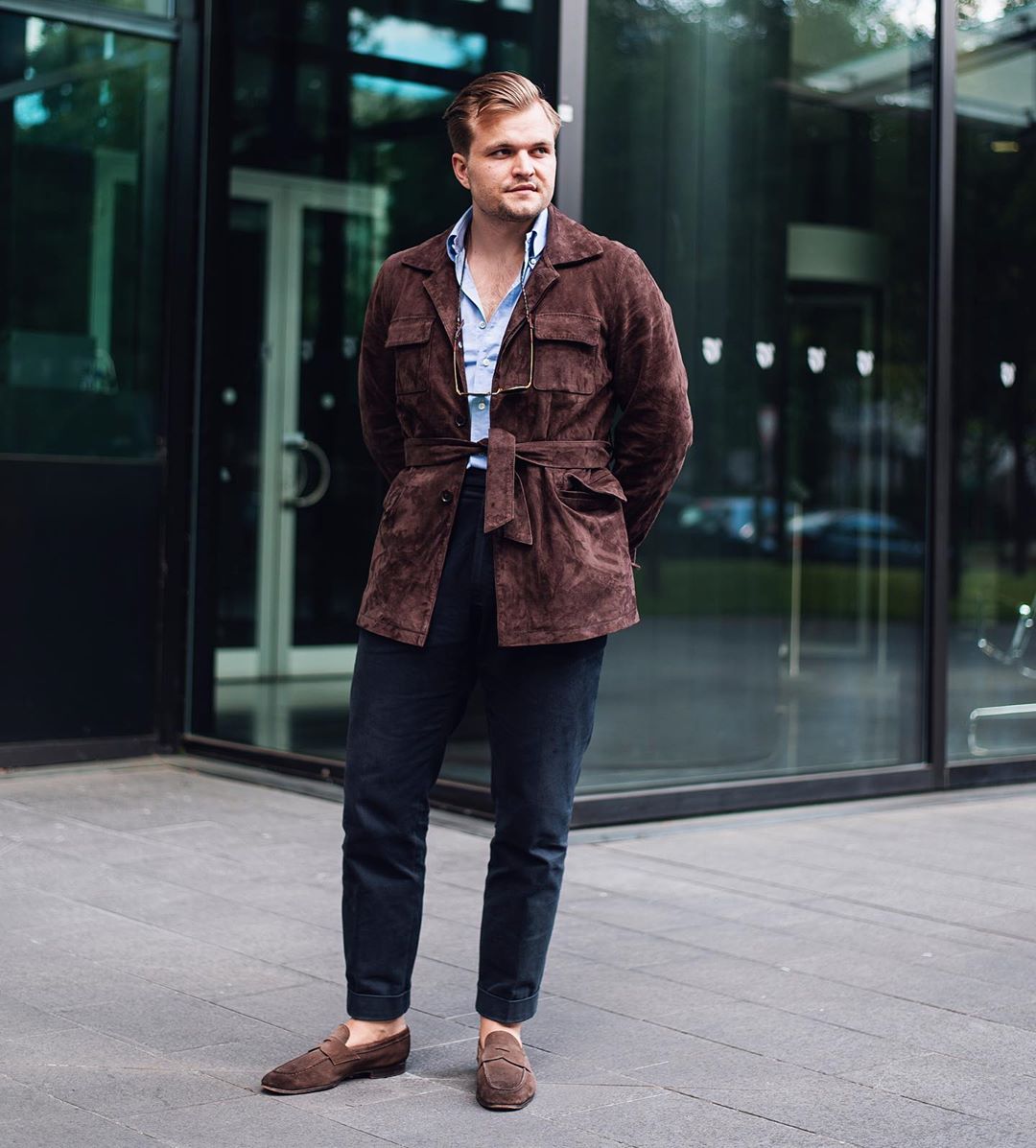 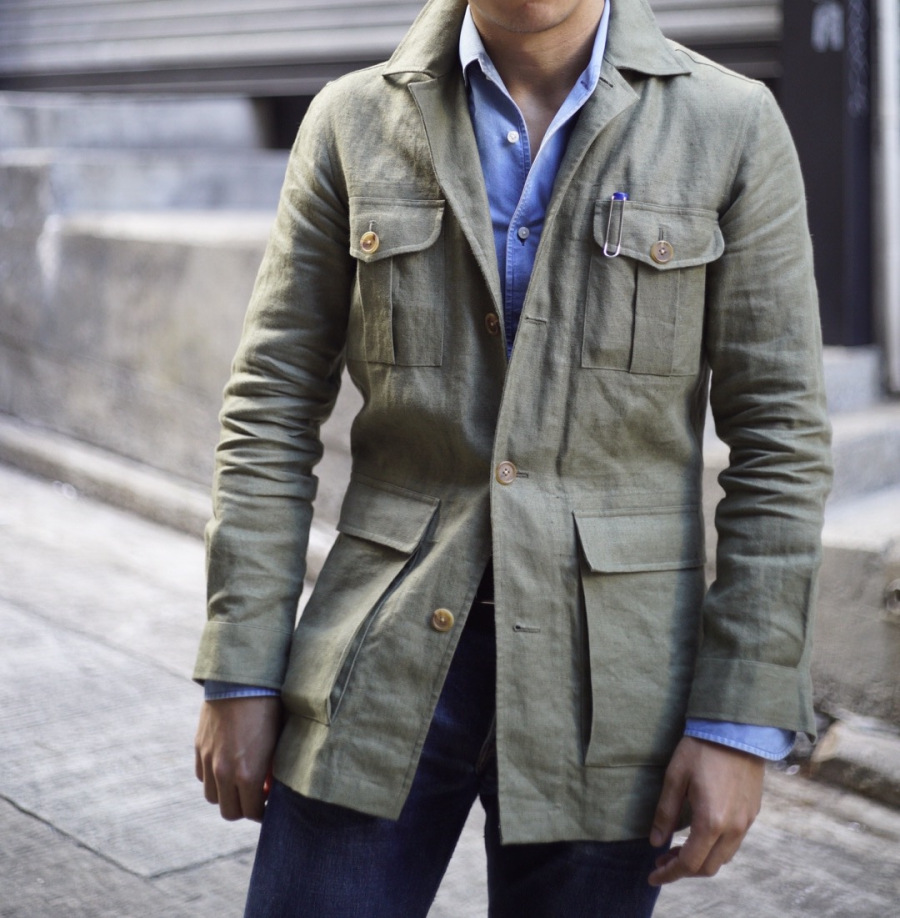 It seems that every brand has their own version of it and we’d be remiss if we didn’t take the opportunity to show off our own special entries in the market; the best part is that we make them available as MTO and Bespoke, customizable to your preferences.  This way you could grab a piece of that old school hunter charm for yourself. 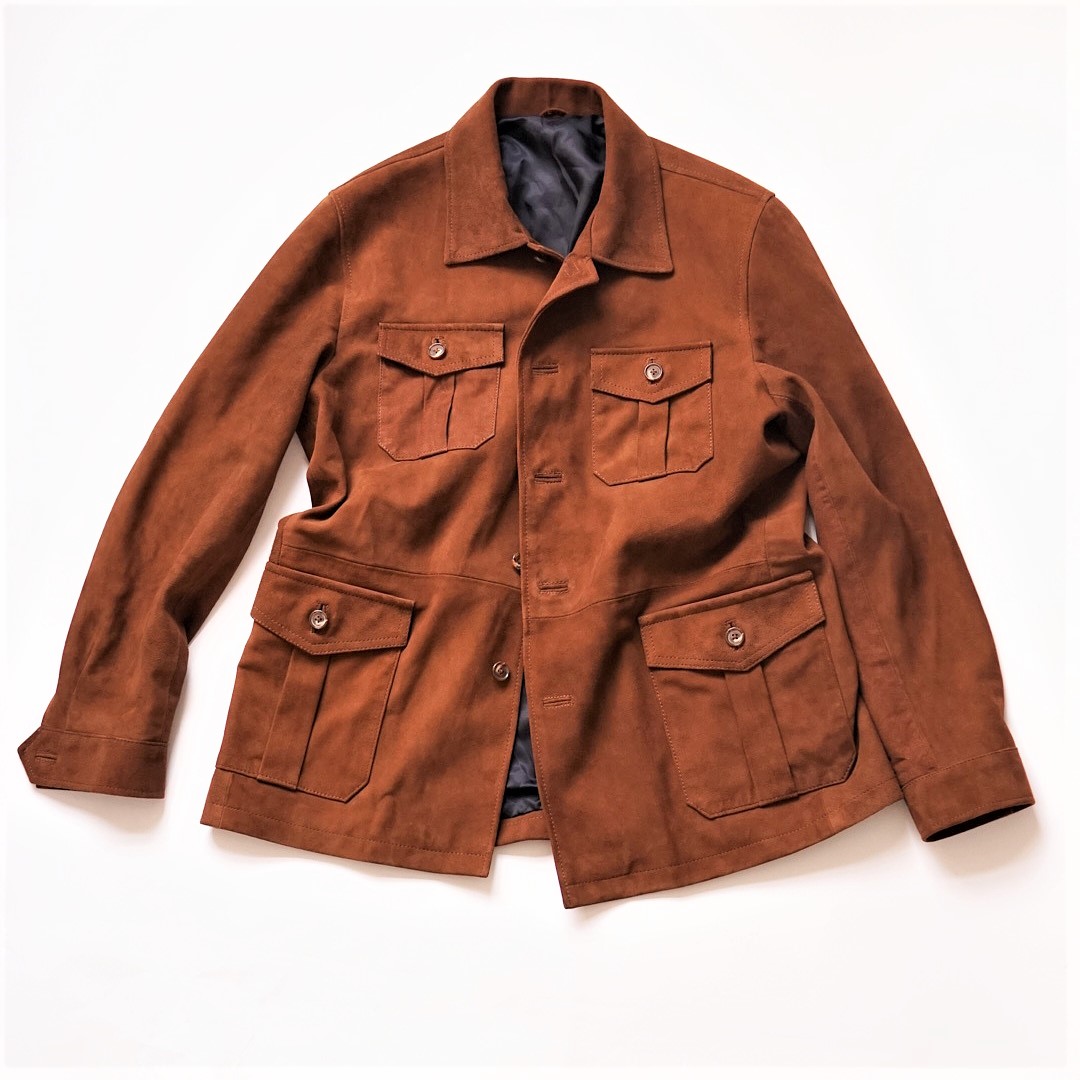 Our main safari jacket was named after the writer himself, who would wear it while hunting game. To keep its roots alive, we’ve kept most of the designs the same as the original military one.  Four pockets with button flaps and box pleats are ready to keep your accoutrements for the modern urban jungle, like documents for your business meeting, a well traveled passport, or your smartphone and charger.  Instead of a full belt, we went with a half belt in the back with button adjusters to give yourself a slim silhouette if you desire, as the pleated back will provide you with full arm movement. The only thing we really removed were the epaulets which we felt were a bit too distracting to be an everyday garment. 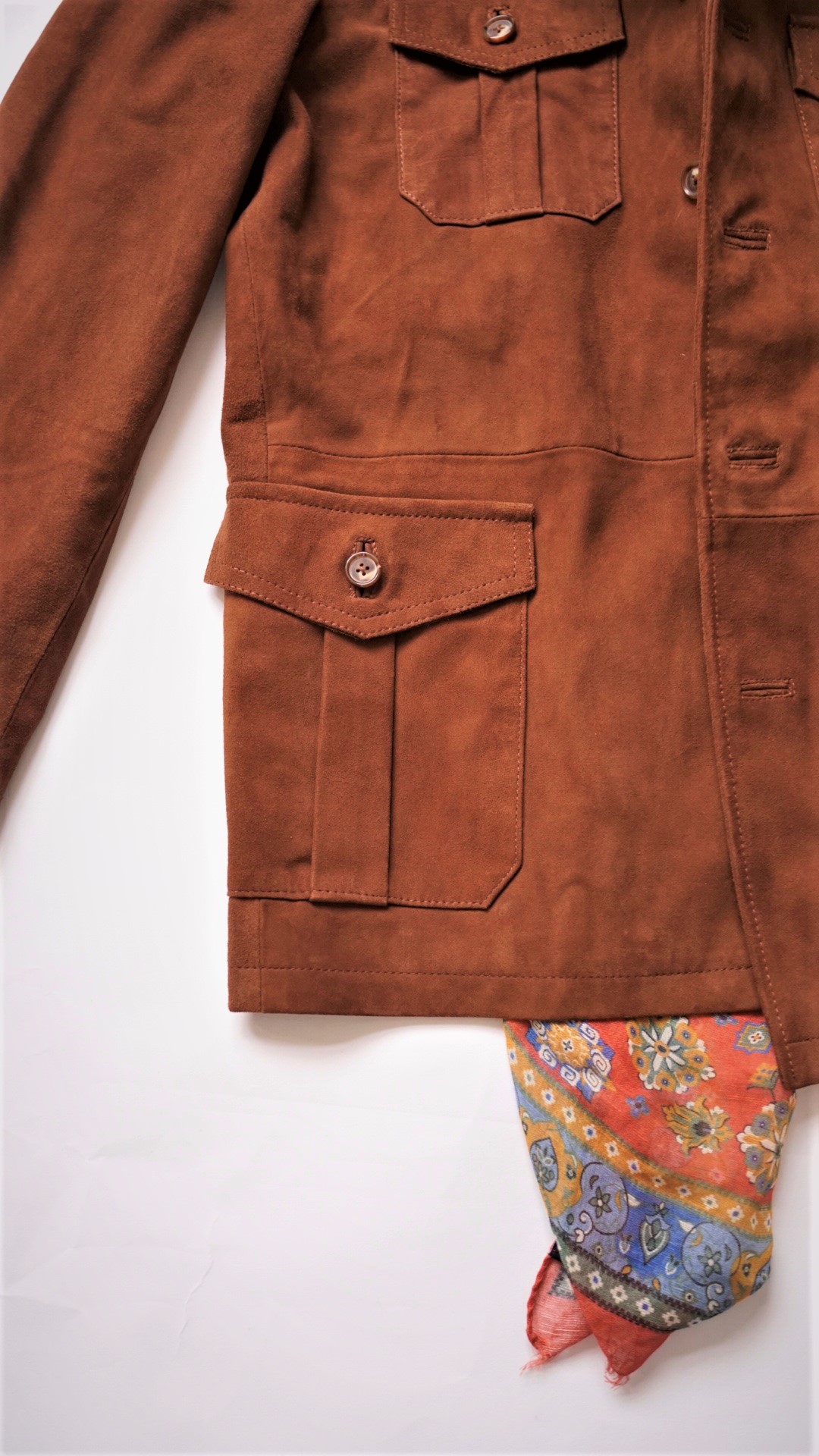 Of course we were able to add a few more details to give more of a sartorial feel, as to separate it from simply being a milsurp piece of outerwear. We’ve given it a bit more of a trim figure, flattering on all body types.  We also half lined the jacket with bemberg lining, to give it a few nods to your favorite sportcoat; pick stitching for decorative elegance; and there’s our favorite genuine horn buttons, reinforced with crow-foot stitching for longevity.  As a final touch, we’ve gone for a wide shirt collar for maximum steeze. It’s practical when it’s propped up for the elements or for just feeling cool as hell. 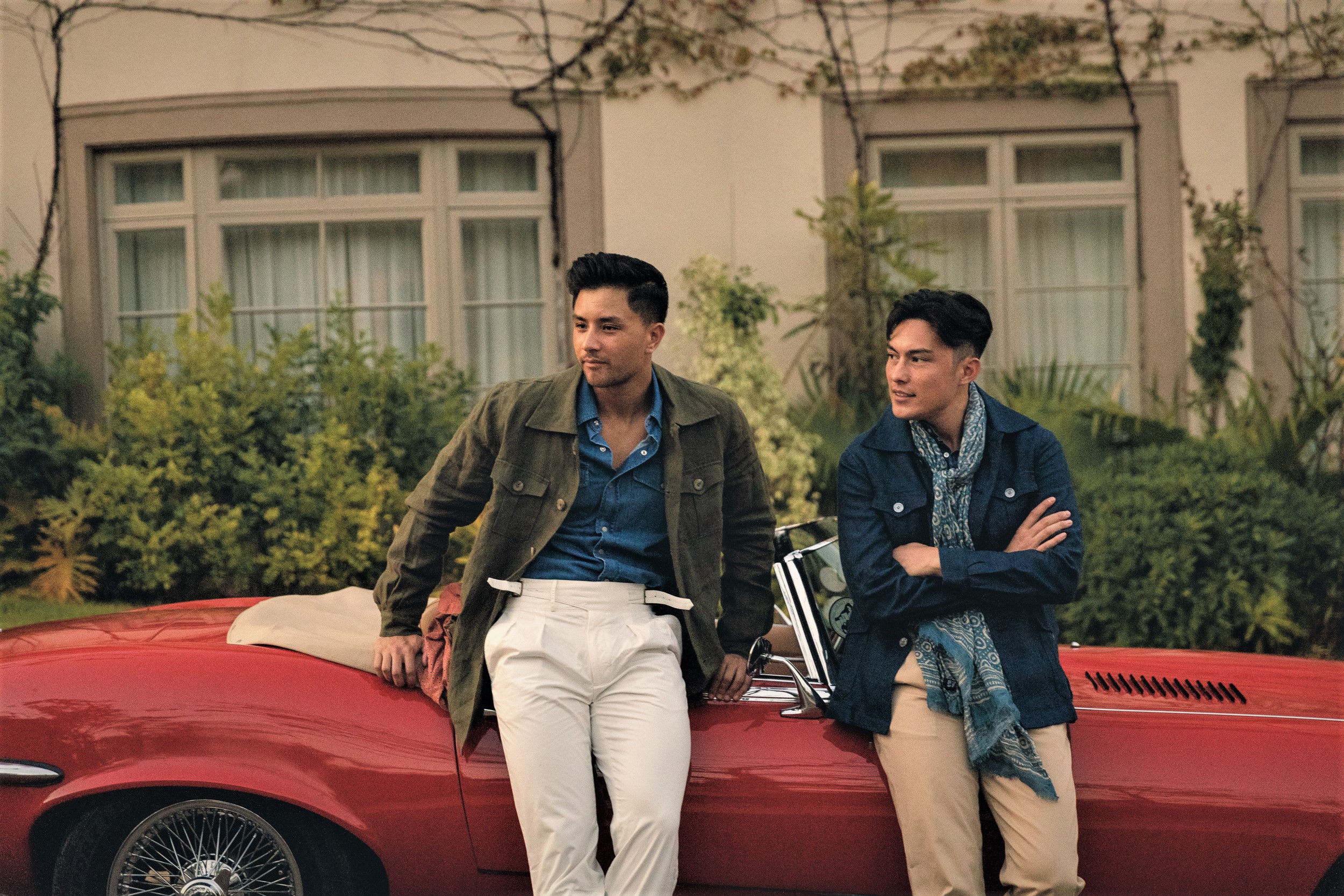 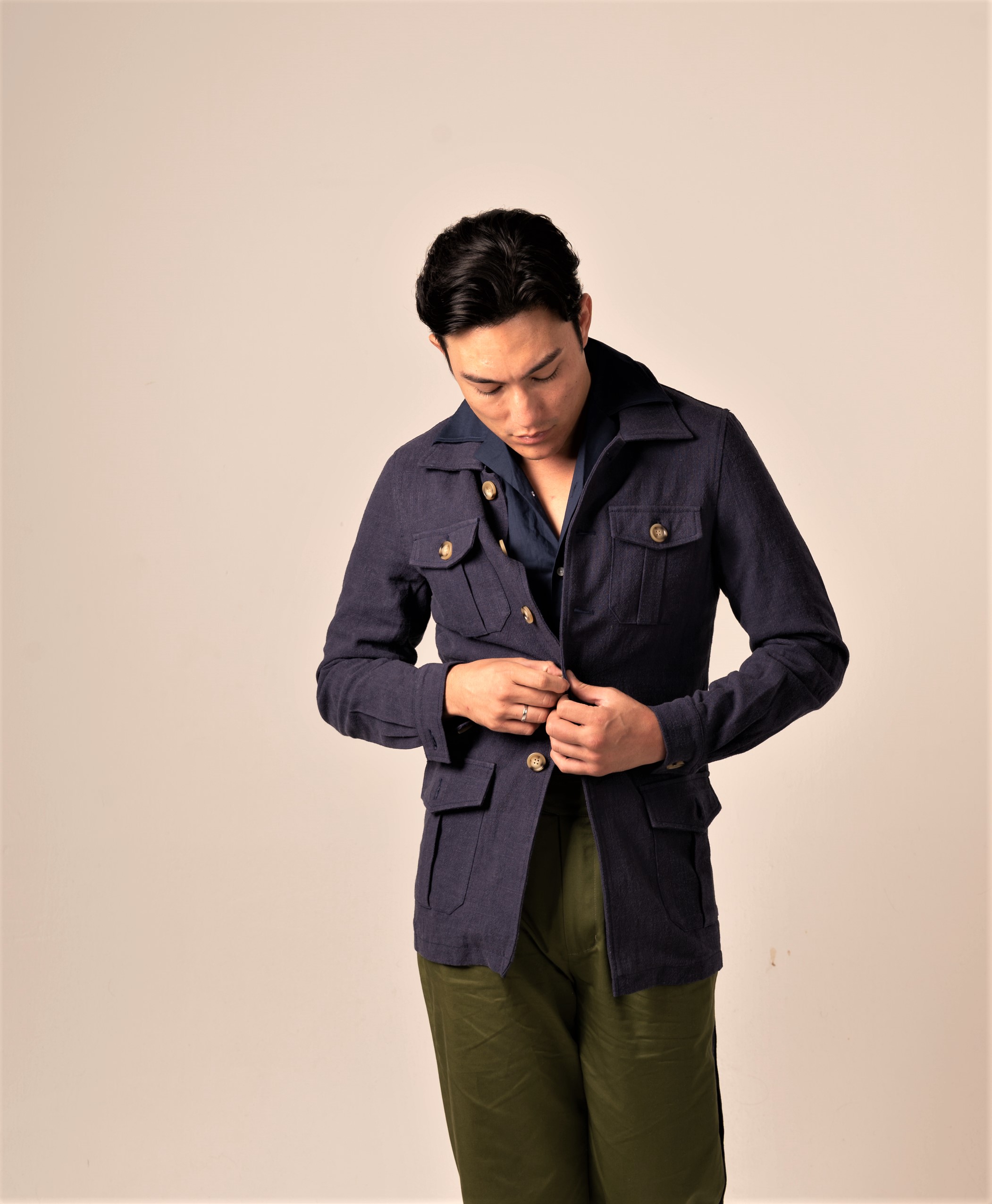 Hefty 380g linen is our preference for the summer safari, being a bit more wrinkly and casual than the original khaki drill it was conceived in, and available in many colors to fit your fancy.  You could even do corduroy if you’re feeling particularly unique, which when paired with a matching gurkha makes for a new take on suiting. 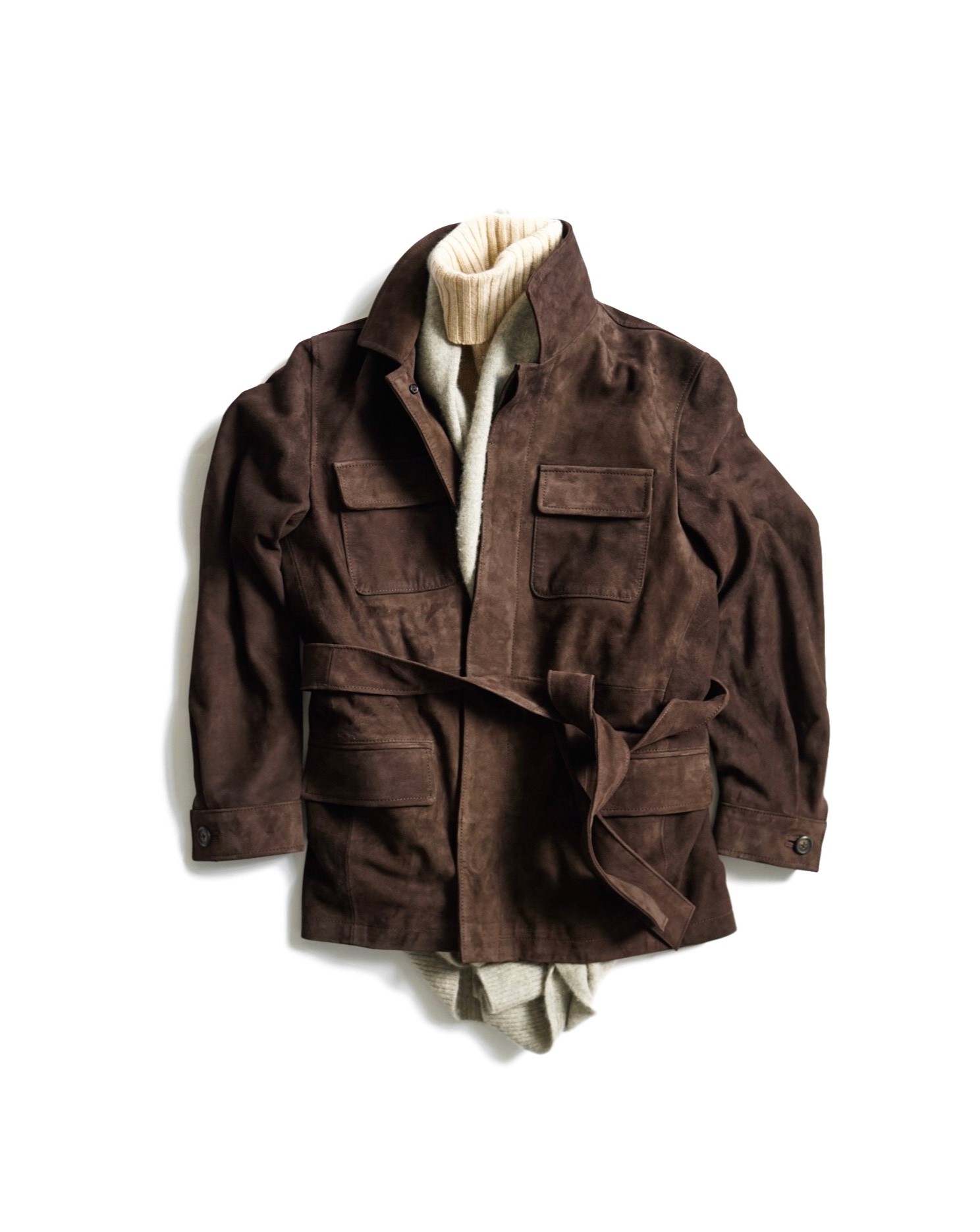 If the Hemmingway was the utilitarian model, then the Rakish one is the lounge version  By removing the buttons on the flapped pockets, rounding out the edges, and going for a clean belt that doesn’t have a cinch, the Rakish Safari was born.   Gurkha trousers, loafers, and a crisp turtleneck will get you through almost any situation. And don’t worry, the back pleat is retained for movement ready for you schmooze your buddies over the drinks you’re no doubt going to have when wearing this out.  Overall, its a more minimal design for guys who want to give off a clean, yet louche vibe with their outerwear. 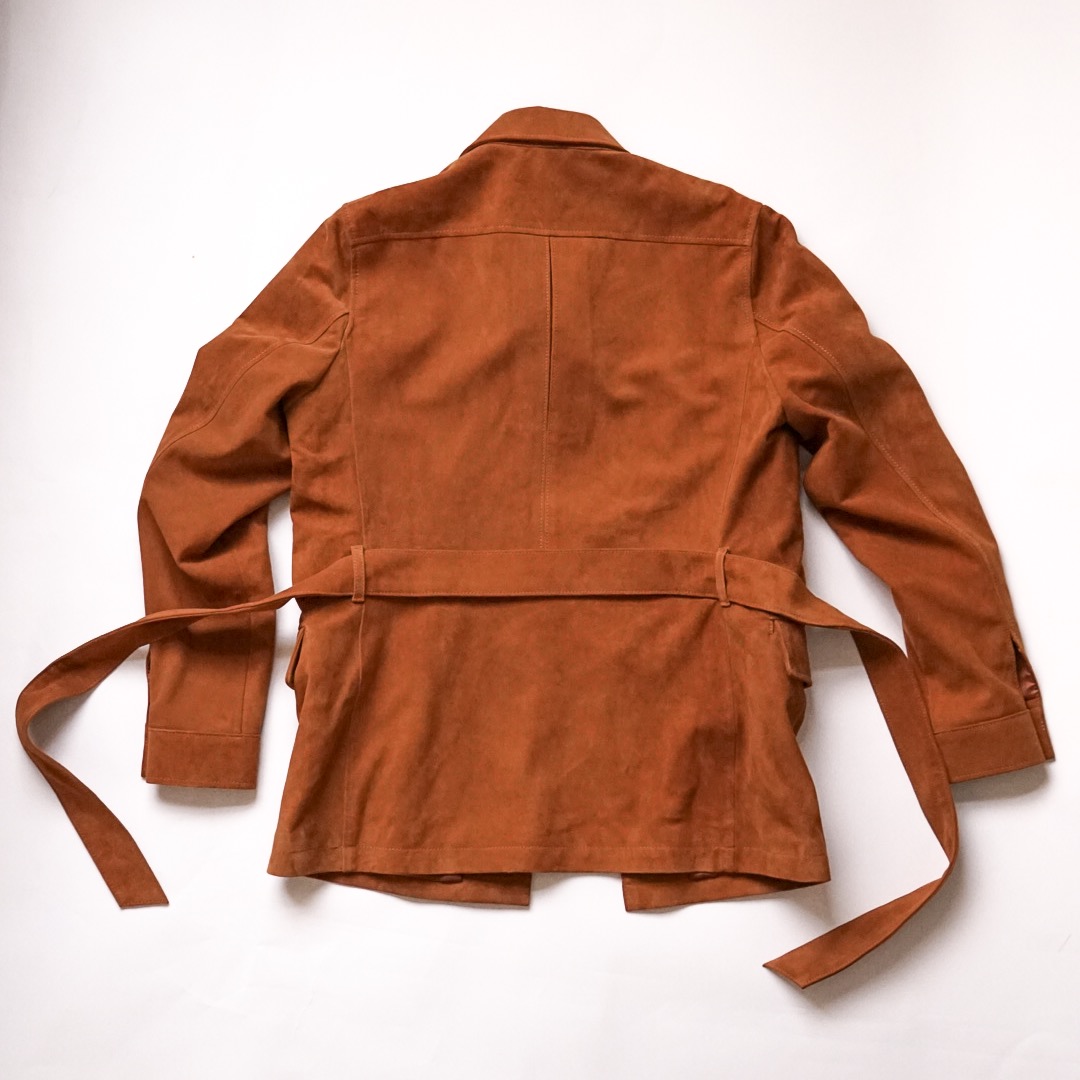 With this version, we definitely recommend suede to lean into that 70’s relaxed vibe. Tobacco suede is the most popular, but we can’t deny the appeal of burgundy or the muted taupe.  In any case, it’s really up to you to customize it yourself on our website. Or you can email us and get that perfect safari made up as a bespoke order. 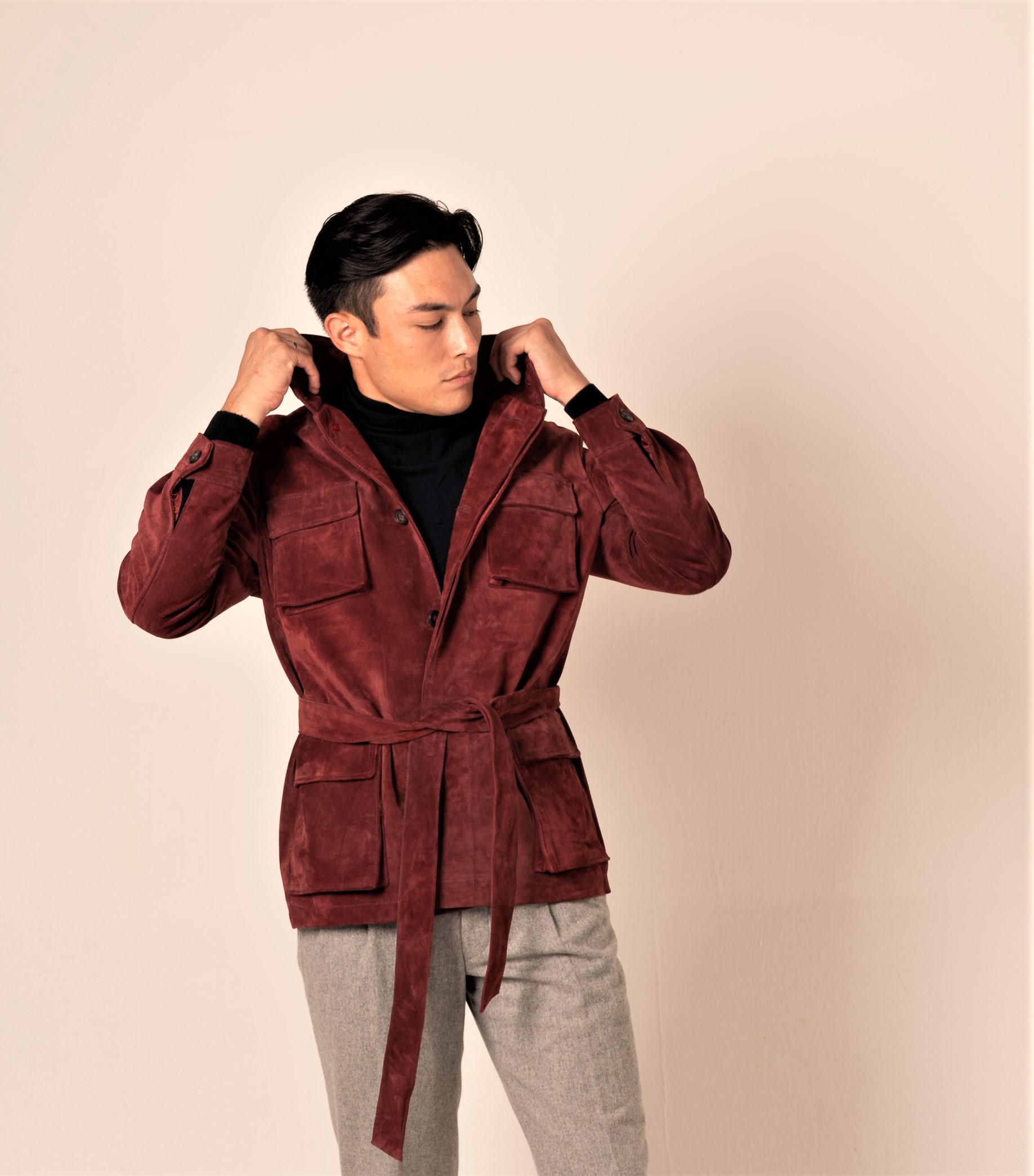 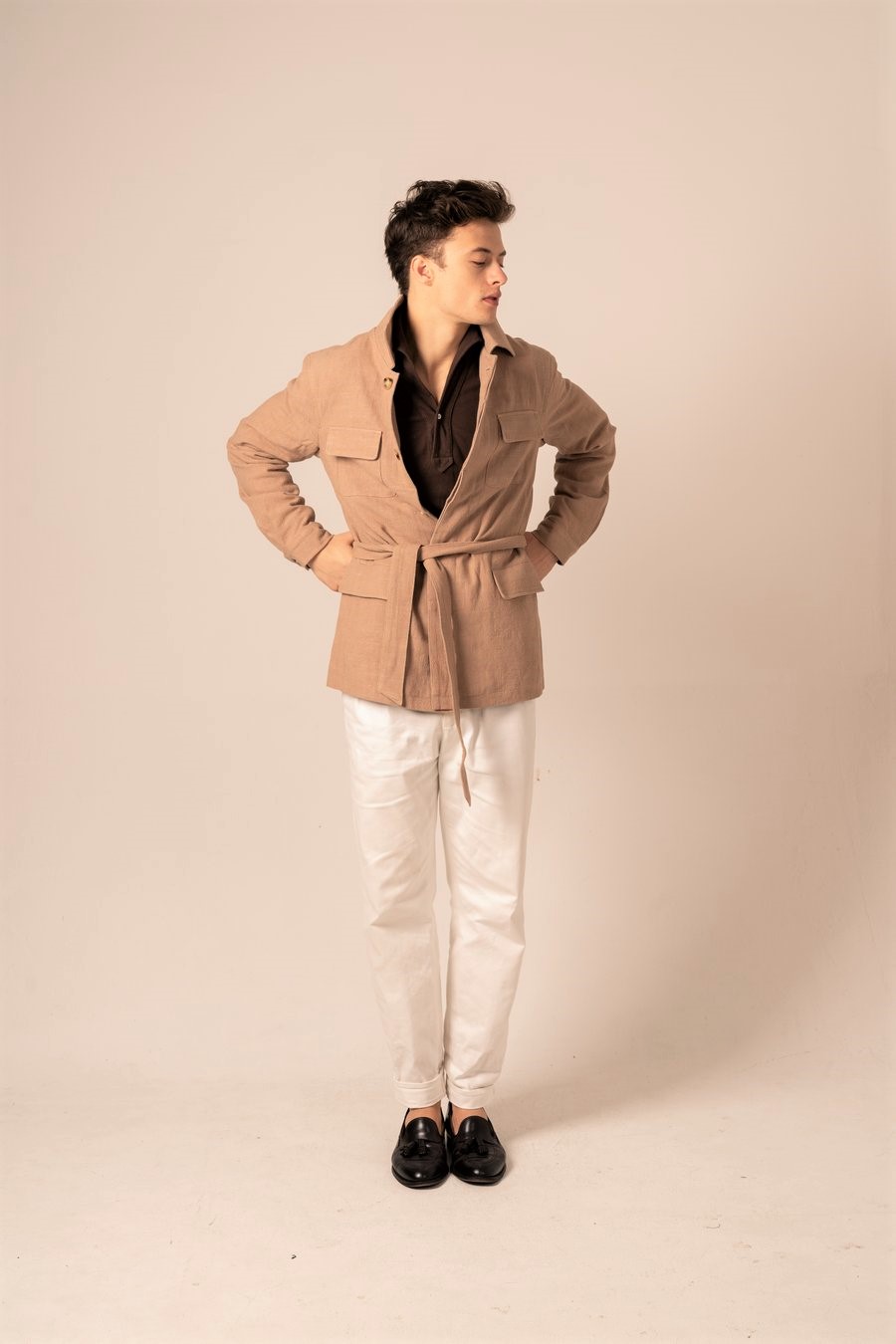 Pretty soon you’ll be ready for the hunt, whatever that means to you.