We all love the G-1 here at Craftsman Clothing. It’s such a classic piece of military-inspired outerwear with it’s iconic shearling collar.  But that’s not the only thing we got that has shearling. We’ve heard your cries and are bringing in two new models for you to order, the Shearling B-3 and the Grizzly Jacket! 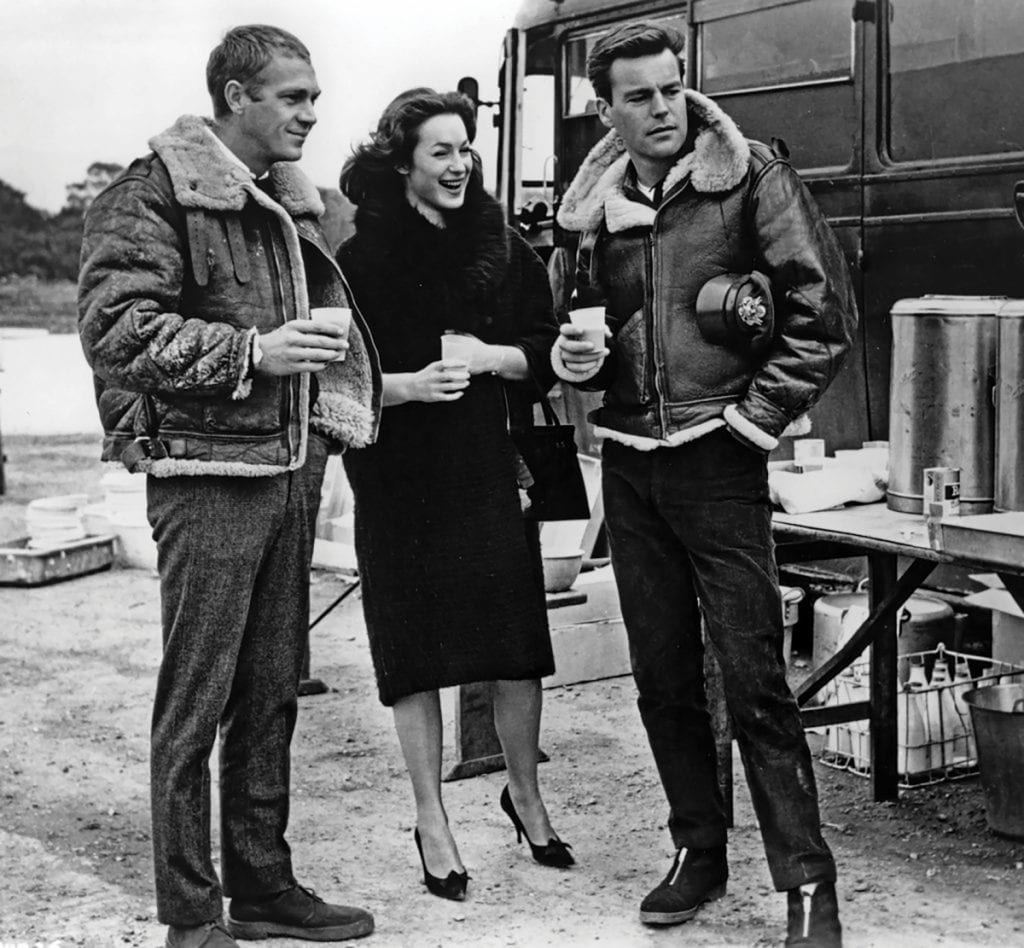 Craftsman Clothing wouldn’t be a true artisanal brand if we weren’t dedicated to constantly innovating new products.  The best thing about menswear is that we don’t always have to look to the future: the best inspiration can come from the past.  And when we looked to the past, we noticed that there were a few styles that we haven’t seen as much anymore. If they were made today, it was done at high prices, not in the same quality, or just not in the style we wanted. So we’re bringing them here as a limited time for you, our faithful Craftsman Clients.  And we’re also going to dive deep on their details. 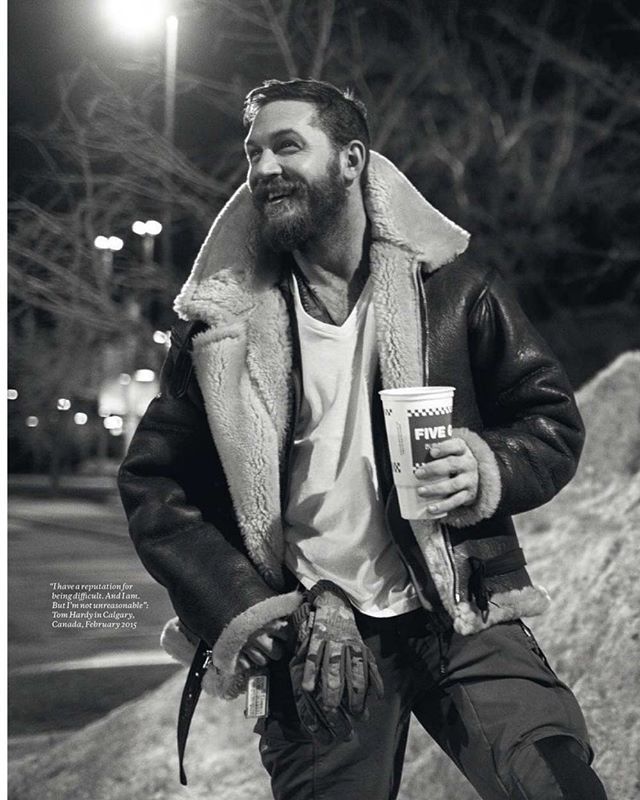 Plus we all know you saw Bane and thought “damn, I wanna look like that”. And no we’re not just talking about the muscles!

Like we said before, wearing leather jackets with shearling collars were absolutely necessary when you were a pilot in WWII.  The metal and high altitudes did you no favors! For bomber crews who were required to fly at an even higher elevation, the cold was even harsher. To prevent hypothermia and simply help these young boys do their jobs, the military developed the B-3 jacket.  It was made of an extremely bulky sheepskin jacket with sheep-furlining, specifically for these Flying Fortress members. There was no waist ribbing or slim fit this time; comfort and room for plenty of layers was the key here. Oversized collars and straps helped keep the warmth in! 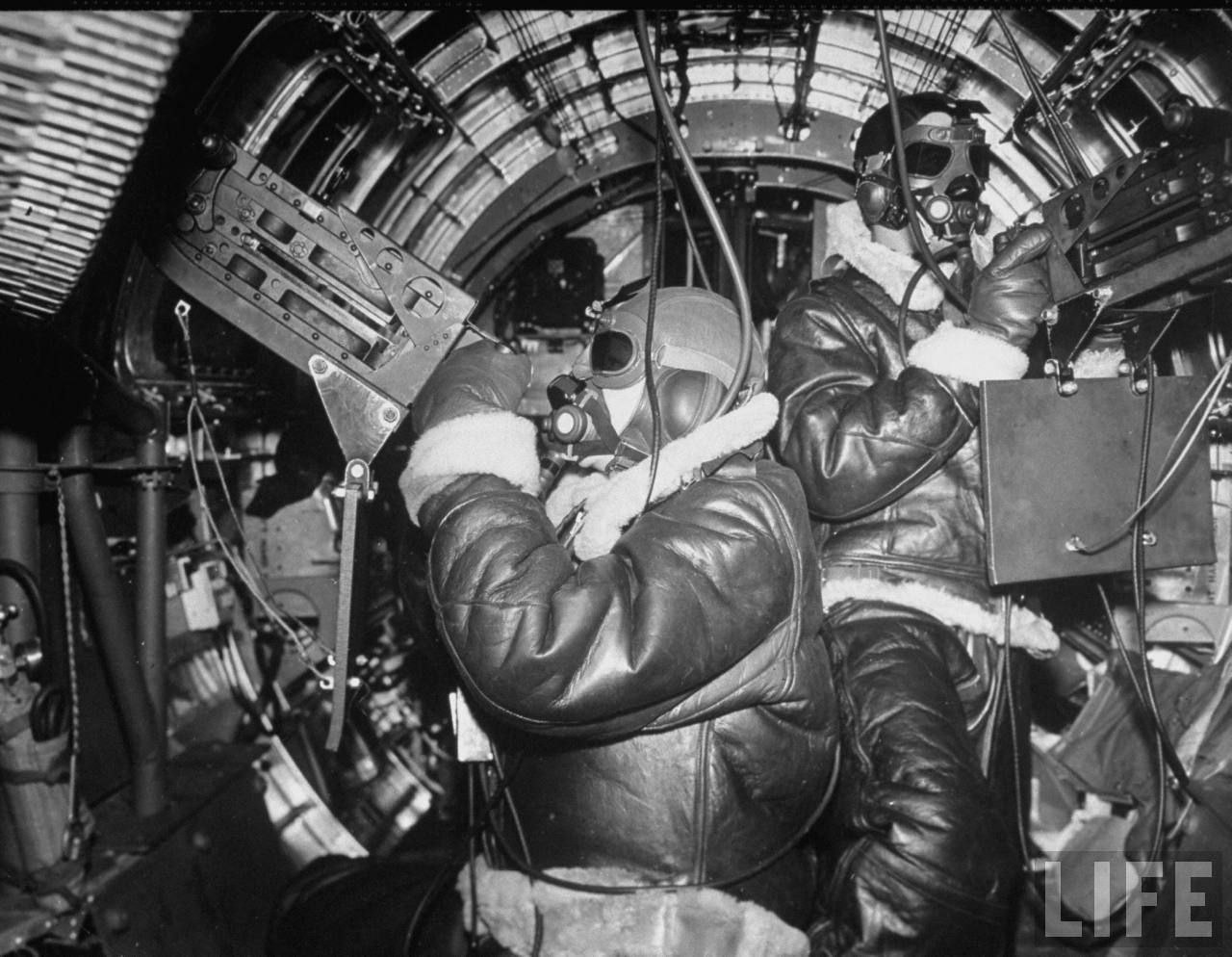 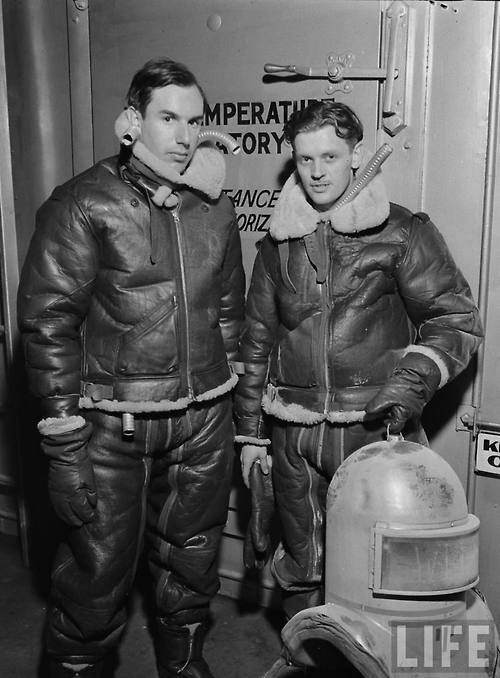 Eventually the military wanted to create a new jacket that was in between the slimmer G-1s and the bulky B-3s, which is why they made the B-6 jacket. It was a bit rarer, only produced in the later half of the war in 1943, and was made overall to be lighter, making more room in the cockpit. When you look at old photographs, you’ll notice that it is more similar in fit to our G-1s and A-2s while still being largely analogous to the B-6 with its shearling lining and throat latch. 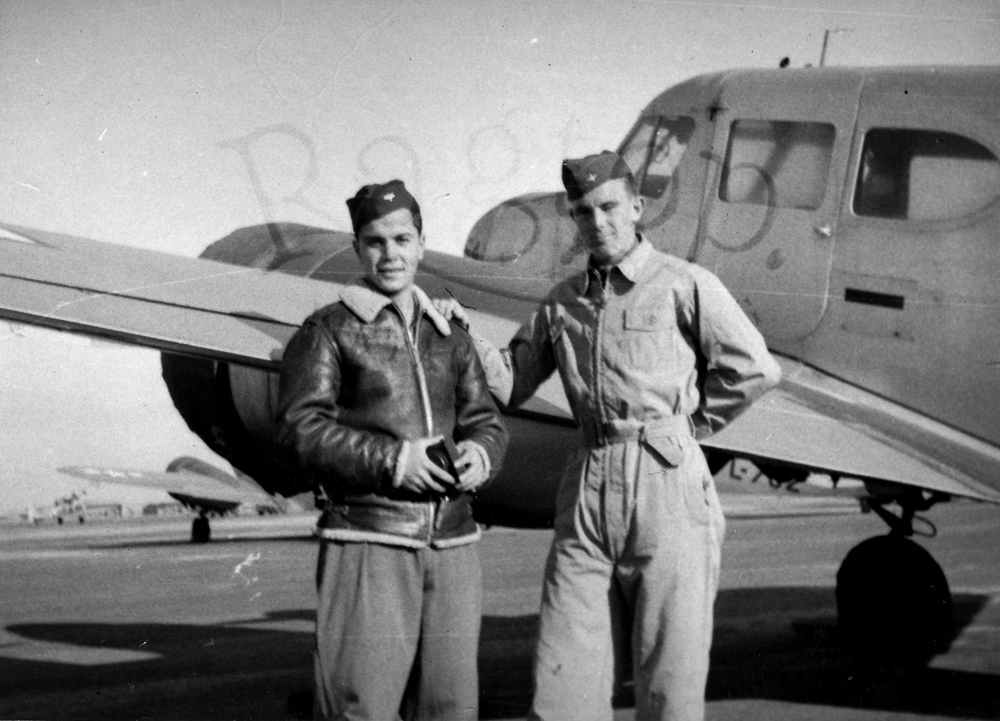 You can’t deny that these two heavy duty shearling jackets look absolutely badass.  Like with most of the other military inspired garment we do, everyone is damn good in one.  Just look at the pilots and gunners; they somehow look simultaneously dapper and rugged. Just look at how Steve McQueen wore it around!  Other than that and a few WWII pictures, seeing these worn isn’t too common today unless you’re Tom Hardy, who wore both a shearling coat as a Bane and a shearling bomber for an iconic photoshoot. We just knew we had to reproduce it our way! 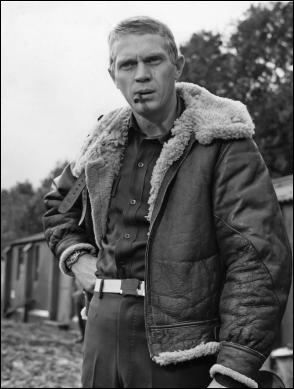 Our version takes the best of both the B-3 and B-6 to create a shearling bomber that is uniquely Craftsman and ultimately customizable for our clients. While you can get it in skin leather, we’ve made it available in supple Italian lambsuede and real shearling, with hand done pick stitching as a luxurious touch. Because it’s our modern take, we’re able to keep it warm and have a nice fit through the body, as we’re more concerned with keeping warm in our fast cars instead of a bomb filled plane. The oversized collar is retained, along with the double throat latch in order to keep things warm.  The angled warmer pockets come out as a patch rather than a welted on, adding to it’s vibe as a casual civilian model. Soon, you’ll be ready for victory! 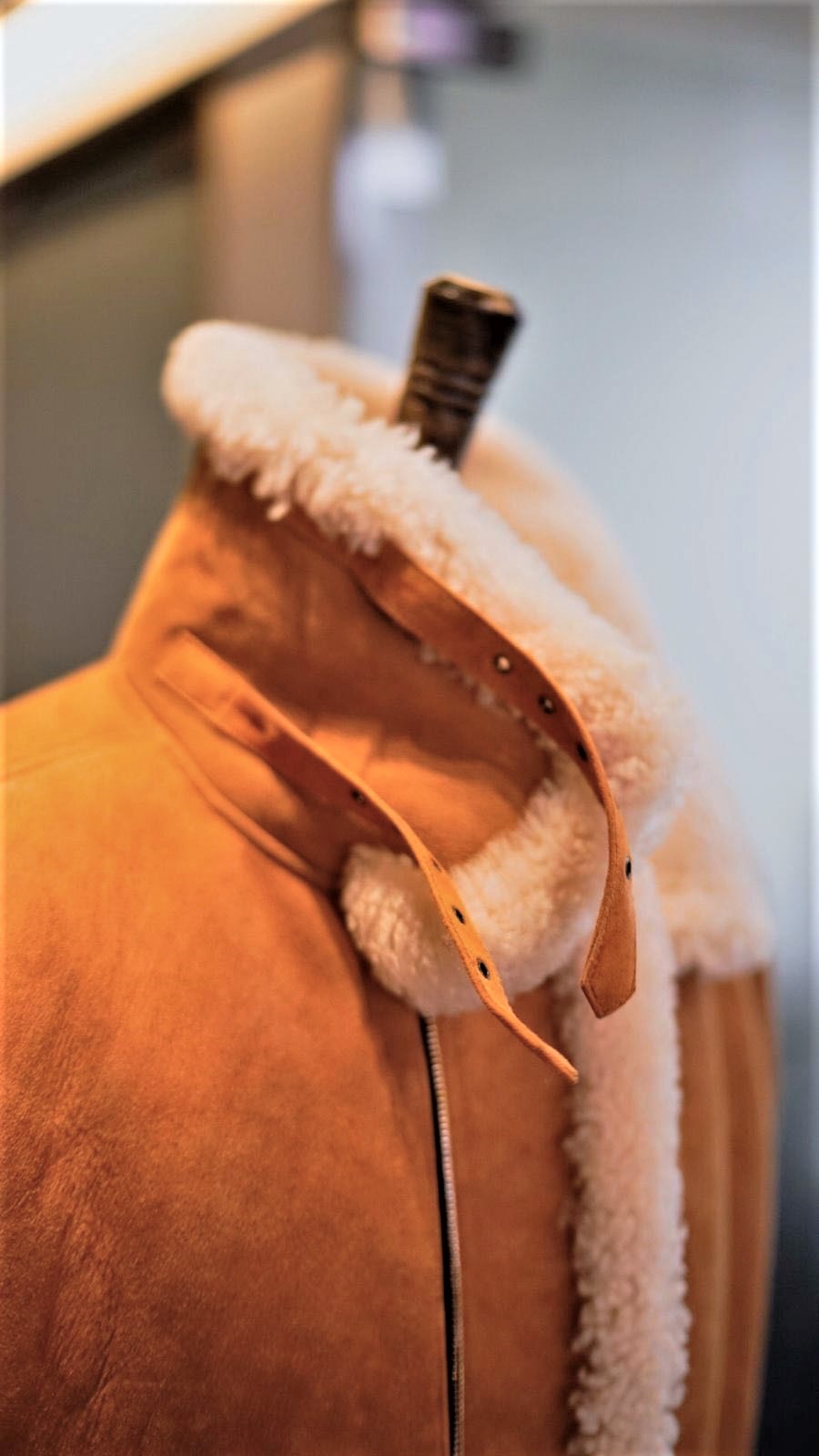 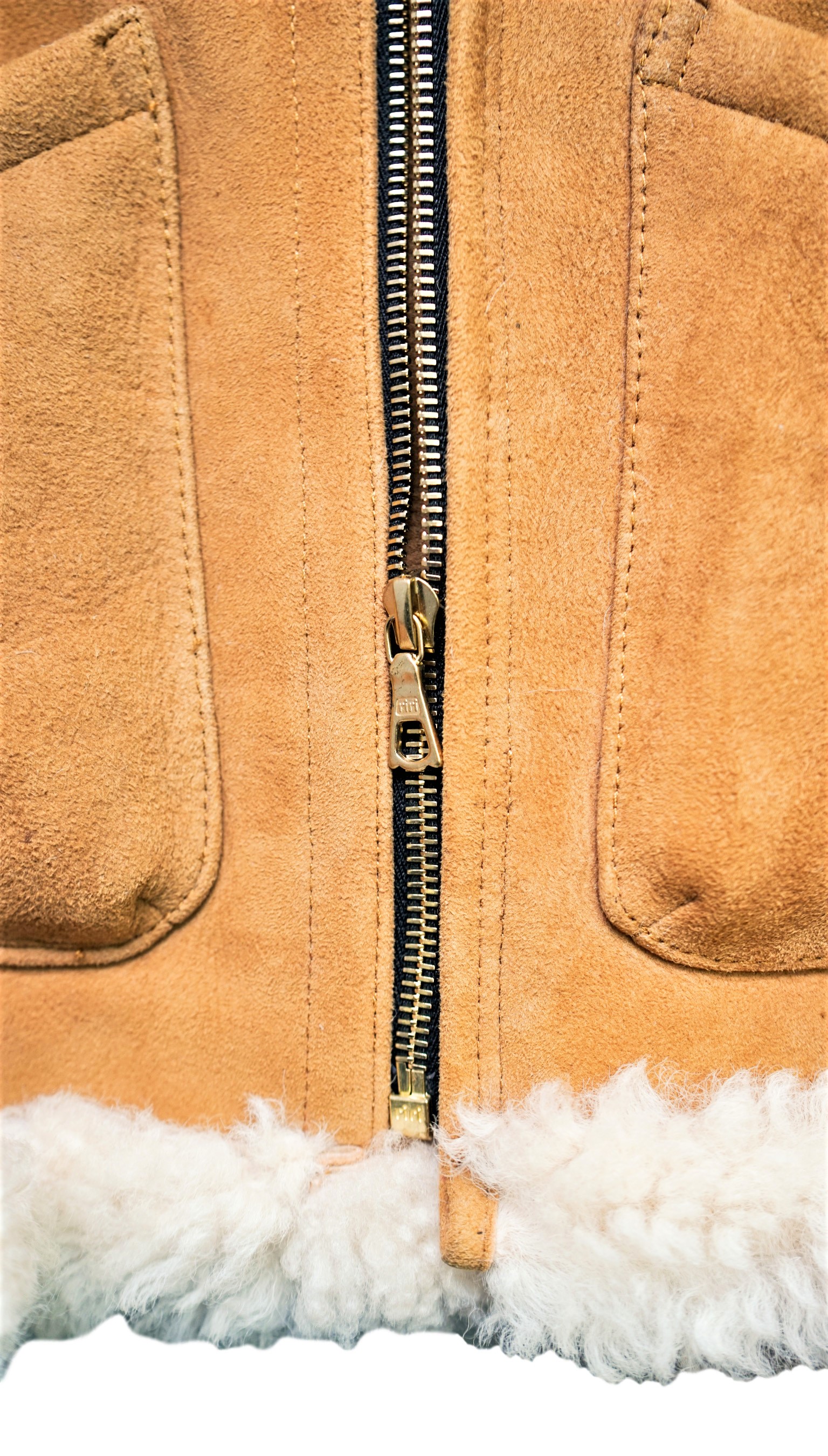 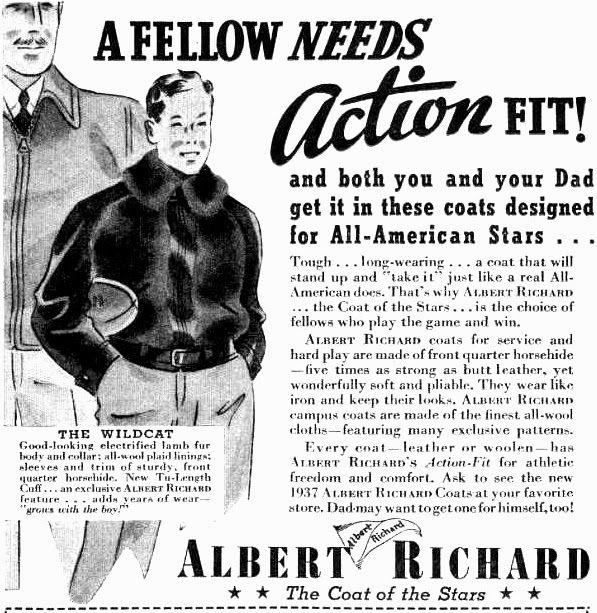 Leather jackets have always been common in civilian wear, as many manufacturers looked at military or workwear designs and replicated them for the masses. As a result, you had many different types in the market: A-1s, Cossacks, and double-riders to name a few. To separate themselves, makers would flirt with different details and materials, with the two-tone varieties becoming a rare favorite that fetch a lot today in the vintage market.  But one such design was the king of these special models and is largely absent from the overall market and that’s the Grizzly. 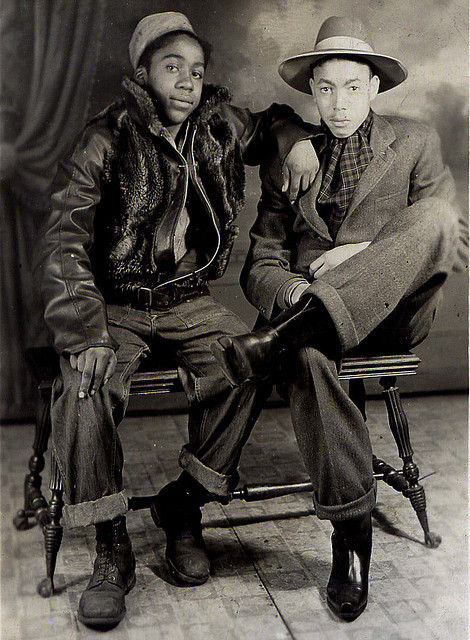 Funnily enough, it was never originally the Grizzly when it was popular; the trade term for it was a Laskin (or laskin-lamb) jacket due to the material. In any case, the Grizzly is iconic and rare, with authentic vintage ones fetching nearly a thousand dollars.  You can tell when a jacket is a Grizzly because it contains a fur hide on the chest panels of the jacket, usually in a contrasting color to give it a two-toned appearance. The general design is fairly similar to a G-1 in that it has a zip front, but the welted pockets and raglan sleeves are additions to make it interesting. It gained prominence in the 1930s, being a bit of a novelty and yet practical addition for casual wear, worn with denims and flannel trousers.  However most pictures of it are either advertisements or simply archival photographs of surviving pieces; it truly was a lot of fun to bring The Grizzly back to the limelight. 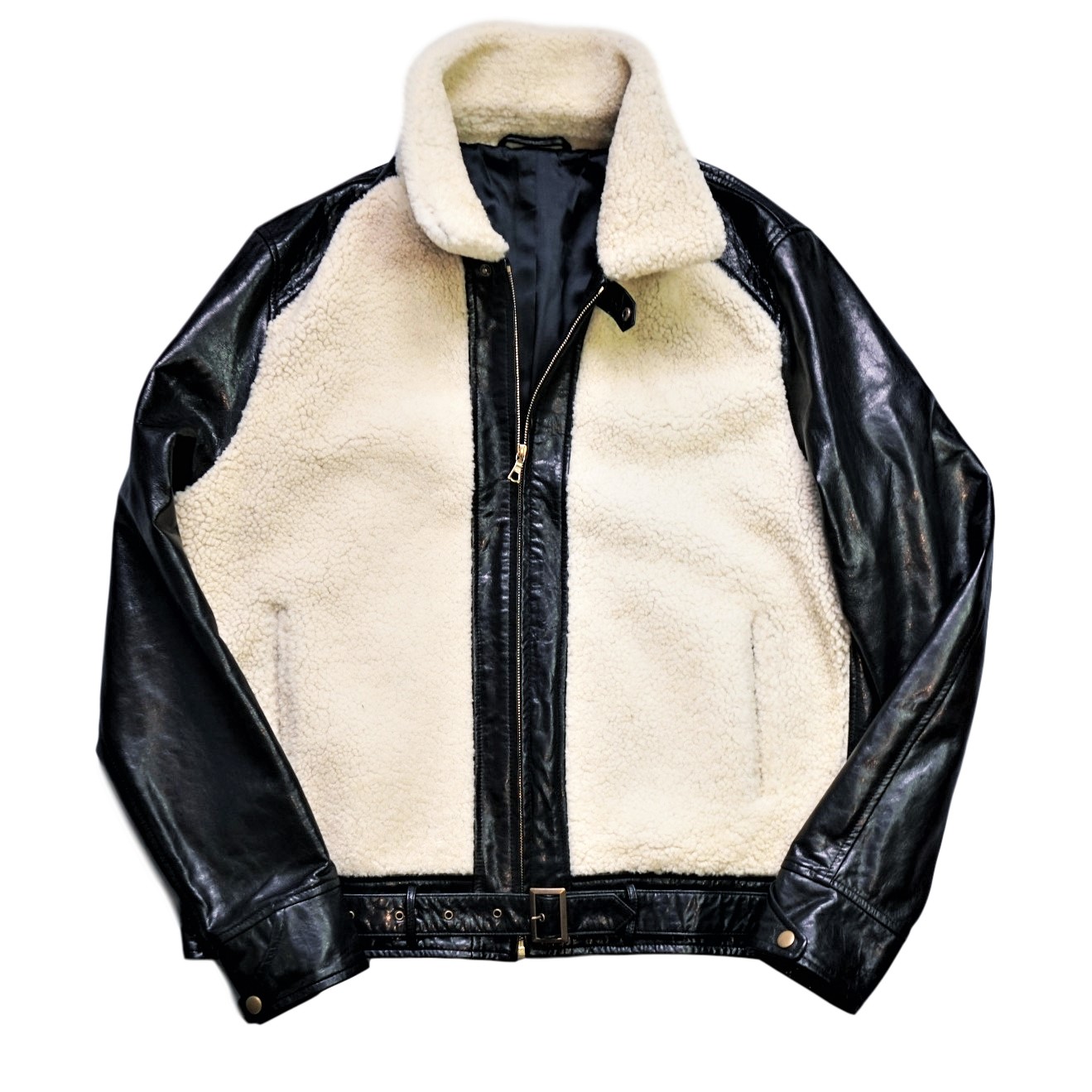 Our updated version, available as MTO, follows the same mantra as our other leather jackets, like the G-1. The fit is slimmer through the body and sleeves, which can be adjusted when you provide your measurements.  Instead of ponyhide, we’ve brought in the shearling for a warmer and offbeat vibe that still exudes the same exoticity of the original Grizzlies. And don’t worry, you can choose both the shearling color and leather style (skin or suede), subject to factory availability. 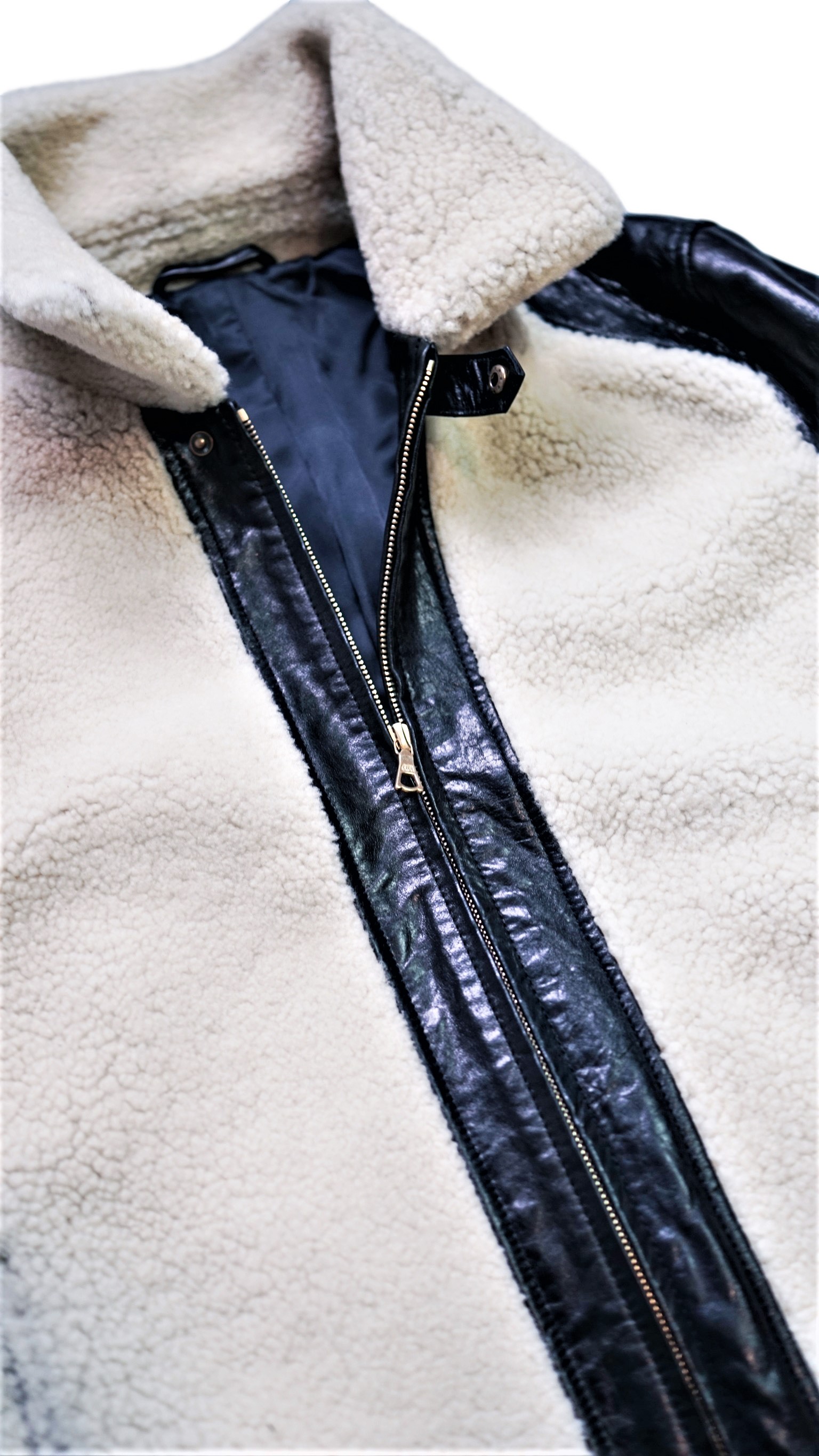 The details are fairly simple. The collar is a modest one, similar to the G-1 in size.  The pockets are welted, making for a stark contrast to the flapped patch ones we’ve seen in our other jackets.  We’ve included a built in belt, similar to the ones you see on classic motorcycle double riders; it was also common on period Grizzlies as well.  And lastly, there is a button latch at the top of the zipper to help keep you even warmer from the elements. 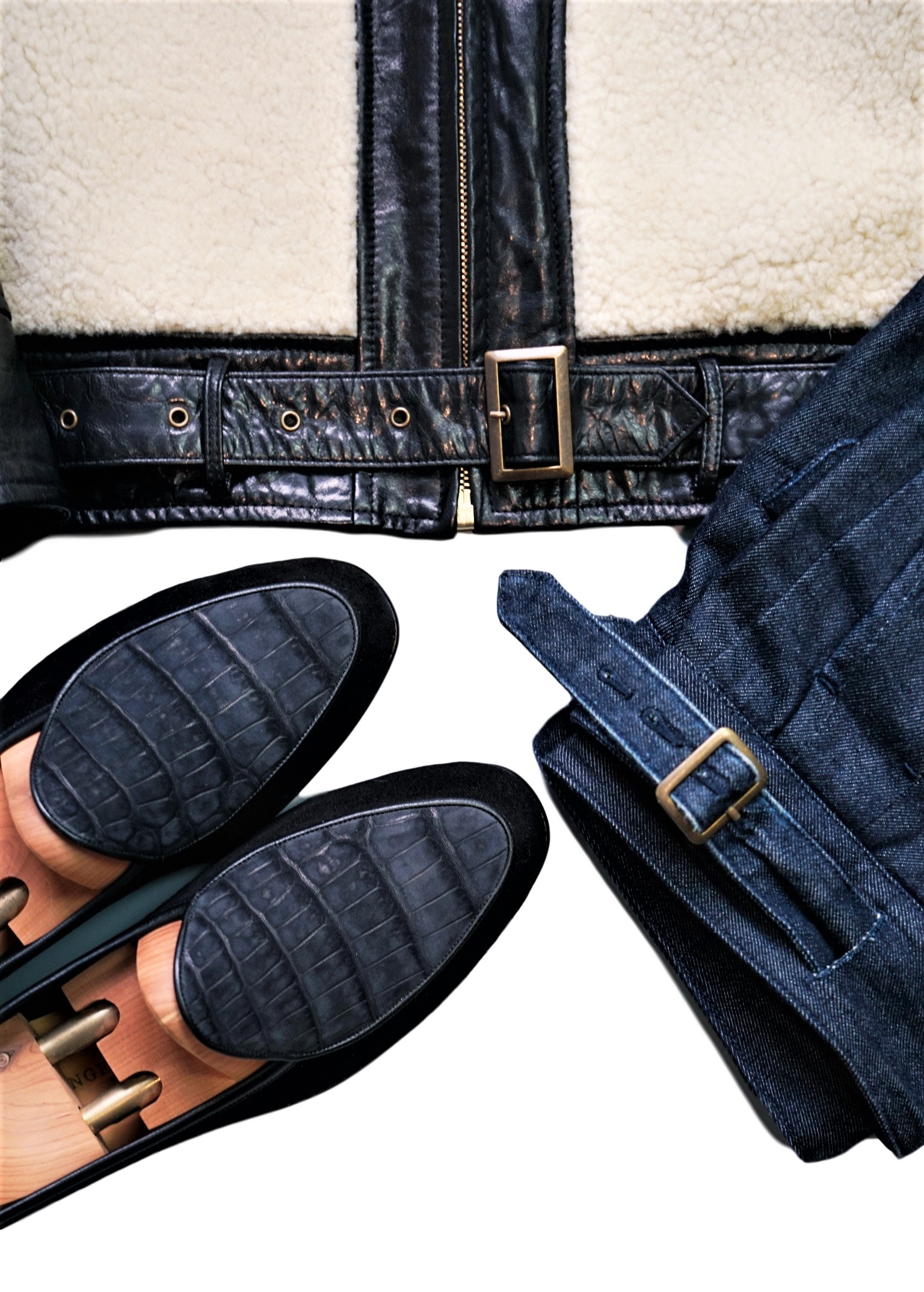 It’s a perfectly versatile jacket, ready to be worn for that vintage charm in the New 20s.  Leaning into the ruggedness with some selvedge denim or even our denim gurkhas is a great way to pull off this jacket. You can practically feel the testosterone oozing from your custom Grizzly.


These two special models are now available for order on our MTO page!  We’ve been working on these for a long time and we hope that you not only enjoy them, but take part in this revival of updated vintage classics.  When you wear your Shearling Bomber or the Grizzly, perhaps you’ll get a taste of that a rugged, masculine energy. Except now, you’ll wear it on the way to a dinner at your favorite steak restaurant or to meet up for that hot date.


Please email us at Info@CraftsmanClothing.com if you have any questions about placing your order.